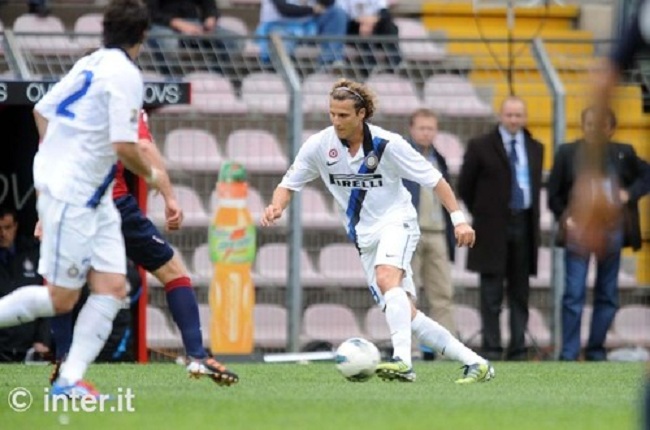 Stramaccioni to change Inter to focus on Alvarez.

Against Siena, the Uruguayan, still disappointed, will start on the bench.

After two months Ricky is back: six Argentinians all on the field from the first minute.

Appiano Gentile – Forlan is rejected in favor of Alvarez, Guarin is postponed to get in better shape and space to Obi in the midfield.  These are the latest news in view of the match tomorrow against Siena.  Andrea Stramaccioni, yesterday praised by Cesare Prandelli after the visit to Pinetina (“I congratulated him because he doesn’t change who he is.  He transmits confidence and security because he remains himself” said the Italian coach to Inter Channel”), will insist on the 4-3-3 and with all six Argentinians in the team as starters.

Forlan lost Saturday in Trieste, Diego Forlan has sent anxious signals.  The man who decided matches with Atletico Madrid and Uruguay by himself now seems lost in every sense.  As a wide winger on the right in a trident attack, Cacha looks like a foreign corpse.  He doesn’t jump, doesn’t look to exploit his side, refuses to take shots.  Recall the jeers by the Inter fans on Saturday at the time of his substitution with Obi, the case is not going unnoticed even in the dressing room.  “I’m sorry for Diego – said Zanetti after the 2-2 with Cagliari. He gave his all during the week but during matches, he must re-find confidence.”  After recovered from his latest injury, the one he suffered on January 15, Forlan has always played – with very disappointed results – except when he refused to enter the field against Atalanta (March 18th) because he considered unsuitable to work on the wing as asked by Ranieri.

Back Ricky Stramaccioni gave Forlan his trust against Genoa and Cagliari but yesterday, it seemed like he has surrendered.  During the first test in preparation for Siena, the trident was completed with Zarate, Milito and there was Ricky Alvarez who among other things, unlike Uruguayan, represents the future.  The kid has not played in two months (Inter-Novara February 12) because of an inflammation in the knee and then a calf problem.  Throwing him straight away from the first minute seems to be a gamble but some clues will make you reflect about this choice.  Meanwhile the fact is that Alvarez has been ready for days and was spared on Saturday against Cagliari so that he can be even more ready for Siena.  Then in the words spoken by Strama after Cagliari.  When asked how big the absence of Sneijder, the coach responded: “Wes and Alvarez would give us a lot of quality.  I also said Ricky because he can be very useful as a wide midfielder or as a right winger, the position that he has done the best at.”  Yesterday Ricky – who was always on the field between December and January which saw Inter won seven consecutive matches – was with the starters while Forlan with the reserves.

Guarin best on the bench In addition to the return of Julio Cesar and Lucio, other news is that Obi has the advantage over Poli for Guarin’s spot.  This change is not a rejection for the Colombian.  The former Porto midfielder needs to recover gradually and you will see him more as the season comes to an end where the opponents are not as fresh.