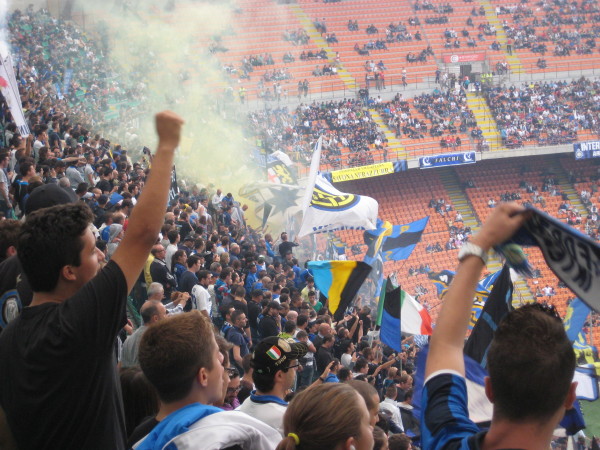 Before the game against Hellas Verona Inter had asked their supporters not to sing anti-Napolisongs because of the risk of the closure of the stadium. The Curva answered with a different kind of protest and here it is described to you step by step.

1. The silent part. The whole curva sat down quiet and held the banner: “The project is clear. You want us as you’ll never have us. Sitting quiet.” As many noted, the Curva Nord started the game quiet in a protest. At the same time all the supporters in the Curva were sitting and showed the following banner which is sending a message to the Italian football federation after their latest actions. Actions that seems to have the target to make the Italian football just like English football, with a quiet sitting audience that doesn’t color the stadiums in the same ways the Italian day.

Part II: “Now we’ll show how ridicolous you are with the bluff that you call territorial discrimination.” Curva Nord then show a banner with the text that sends a message straight to the FIGC and the sportive judge Tosel and make it clear that they are going to prove how silly the rule is and how silly the appliance of the rule is. A point made since teams have been punished in different ways, for different songs that are all discriminating and most important of all: Big parts are punished by the actions that small parts stand for.

Part III: “This you can sing” and “This you can’t sing.” The curva splits up in two different parts. In the right part of the Curva Nord, the banner with “This you can” is showed at the same time as the song: “Milano in fiamme” which means Milano in flames is sung. A song used by many teams who aren’t from Milan, against the teams from the city. In the left part of the Curva, a banner is showed where you can read “This you can’t”, at the same time as the song “We aren’t Napolitans” is sung. A song that is sang by all the teams who aren’t from Napoli and that has punished Inter and Milan this season.

4. “What part of the curva would you want to close now?” The problem has been put into its perspective. Half the Curva are sining Anti-Napoli songs, half the Curva are singing Anti-Milano songs and the question that is being asked is what part of the Curva the judge wants to close now. The left? The right? The whole? In a greater perspective the Curva wants to know how it’s possible to punish a whole curva/stadium for something that just a minority of a curva/stadium sings. Something that can’t continue:

5. The conclusion: “Football is passion and the supporters are it’s soul. FIGC, stop coming with stupid excuses. If you want to keep emptying the stadiums, you can do it without lying.” The message is loud and clear by itself and doesn’t need explanation.

All photo’s are taken from fototifo.it there is no commercial intention with the article and all the rights belong to fototifo.it