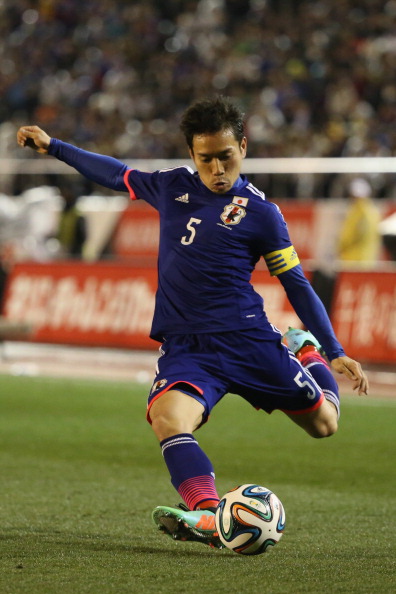 Two Inter-owned players started yesterday in their respective games in Brazil World Cup. Left back Alvaro Pereira, who is currently on loan at Sao Paolo, played from the start for Uruguay against England, as did Yuto Nagatomo in the same position against Greece. Fredy Guarin did not feature for Colombia in their 2-1 win over Cote D’Ivoire. He is, however, the first Inter player to qualify for the group stages this World Cup with his team advancing comfortably.

Pereira helped a transformed Uruguay defense hold out against the best efforts of the English in a 2-1 La Celeste victory. With his namesake on the right of the defense Maxi Pereira suspended for a red-card in the first game, Alvaro slotted in the left as Caceres moved to the right side of defense. The left-back had a solid defensive display with six total successful tackles and four interceptions, winning one aerial duel. He made three clearances and blocked a shot, while on the other end of the pitch Luis Suarez made the most of his shots and put two goals past the desperate English. Given how much Raheem Sterling punished Chiellini and Italy on that side, plaudits must be given to Pereira for keeping him quite quiet on the night.

He did, however have a quite a terrible pass success rate of 58.1%, completing 31. In his usual fashion, he attempted many long balls down the field, but he was only able to complete one such attempt. He gave the ball up once in possession out of his 62 touches, but his performance showed a much improved Pereira from the beleaguered one that left Inter for Sao Paolo months ago. He was struck in the head by Raheem Sterling’s knee an hour into proceedings, and lay unconscious for a minute. But showing grit or naivety (likely both), he got up and against doctor’s best attempts, forced his way back onto the pitch. He was one of the best players on the field, and will have given Uruguay tactician Oscar Tabarez a great impression for whom to start in defense versus Italy.

Relatively little defending to do

Nagatomo looked the opposite of Pereira in some ways as he did not need to defend anywhere as much, and was constantly showing glimpses of class attacking down the left-wing. After Greek captain Kostas Katsouranis was sent off after two yellow cards, the Blue Samurai held the ball a Japanese World Cup record of 74%. While the game ended 0-0, this meant he was not dribbled even once, made no tackles, and blocked no shots, as they came few and far between. He did make three interceptions, as the tired Greek tried getting out of the back with many unsuccessful long passes.

Inter’s sometime-captain had a pass-success rate of over 88% completing 40 out of 45 attempted passes. He had one shot which had to be called a headshot to his teammate in front of goal, unlucky not to deflect in. He would have liked to rack up another assist to add to the one he made in Japan’s first game, but no chances could be finished. He made three key passes, more than any other player on the field, showing his creative side with his deliveries. He rained crosses down upon the Greek defense, with 31%, or four out of the staggering total of 13 reaching their targets. He was dispossessed once, but he dribbled successfully past opponents twice given his 81 touches, and drew one foul. His presence was Japan’s biggest threat to the Greeks, but they simply could not capitalize on their man advantage in the end.