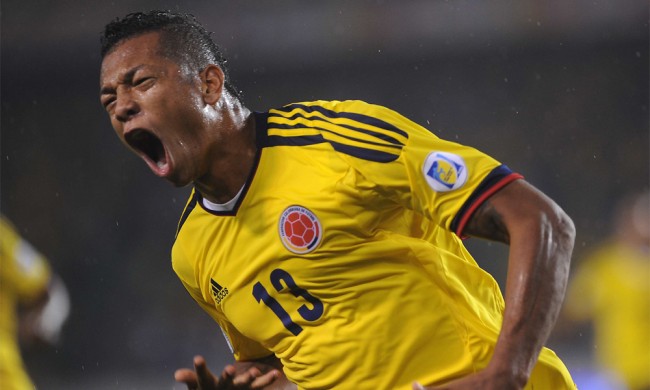 Three more Inter owned players featured for their sides at the World Cup yesterday. Alvaro Pereira & Fredy Guarin progressed to the knockout round while Yuto Nagatomo joins Mateo Kovacic in seeing his side eliminated at the group stage.

A recently improved Alvaro Pereira featured 63 minutes for versus Italy as they advanced past the Azzurri in a controversial 1-0 victory. He wasn’t as decisive as against England, perhaps due to the different formations deployed as to the previous game, but also due to Italy’s going down to ten men.

He completed one tackle out of three bites at the ball, and one interception, while committing two fouls. He made five clearances, committed two fouls, and was fouled three times going forward. The left back had an improved, yet still lackluster pass completion rate of 75%, completing 24 passes, with 67% of them going forward. He completed one out of three crosses and one out of two long balls. He came off for Christian Stuani in the 63rd minute as Uruguay put more numbers forward. Both scoring and conceding four goals, Uruguay advance to the next round with six points and will face Fredy Guarin’s Colombia in the Round of 16.

Everyone’s favorite enigma featured for the first time in this World Cup versus Japan, playing a full 90 minutes during Colombia’s 4-1 win over the Blue Samurai.

In the defensive third, he made three clearances, two blocks, and one interception, and was given a yellow card for a harsh tackle, one of three unsuccessful such attempts. His passing statistics followed a normal pattern of a positive return on short passes, and several wayward long passes. A positive 78% of his passes were played forward as he tried to pull the strings. He suffered one foul while committing two. The powerful midfielder one his one headed duel and three of four one-vs-one dribbles. Winning Group C by scoring nine goals and taking all nine points, his side will face Uruguay in the Round of 16.

Livewire full-back Yuto Nagatomo featured for a full 90 minutes against Inter teammate Fredy Guarin in a 4-1 loss as his Japan team would fail to advance past the group stage.

The sometime-Inter-captain found the going tough in a game he would have liked to have more defensive authority in. He made two clearances and just one successful tackle out of three attempts. He won both headed duels he went for and conceded three fouls. None of Colombia’s goals came from his side of the field, which will give Yuto something to personally feel positive about. He had an great 96% pass-completion rate, misplacing just one headed attempt. Although it has to be said that almost half of his 25 passes went backwards as he was limited going forward. The barrage of crosses we saw against Greece was nowhere to be seen from Yuto against an astute Colombian defense. He did manage one shot on target, while another was blocked en-route. In the end it wasn’t enough as Shinji Okazaki’s headed equalizer would only last 10 minutes before the mercurial Jackson Martinez and incredible James Rodriguez put the Blue Samurai to the sword. Japan was eliminated with just one point to show for three games, scoring two goals while conceding six.

Tomorrow has the possibility of showcasing three further Interisti in Hugo Campagnaro, Ricky Alvarez, and Rodrigo Palacio as their Argentina side face off against Nigeria in the Group F battle for first place.