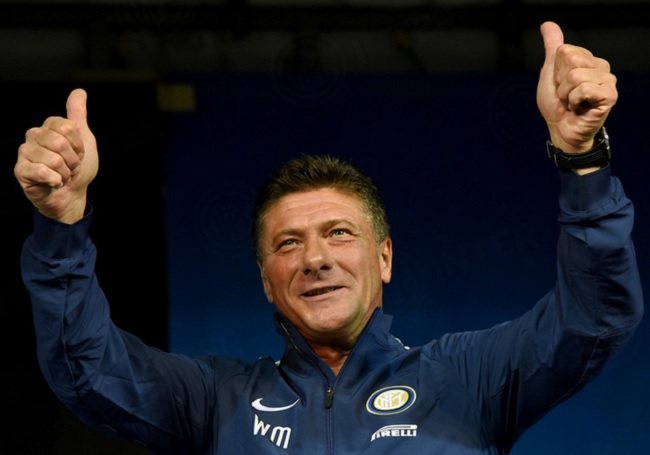 When asked about the previously dangerous opponent Atalanta Mazzarri said: “It is important to consider the history and outcome of previous games against this opponent. All teams tend to bring out a little bit more when they face us and this is normal. We must have a great match.”

After Palermo what did you discuss with the team? “We are at the beginning of a new cycle there are many young people, including foreign players. When on the field everyone needs to be addressed at the same time so that our own values may emerge. If not everyone can get in trouble. I know this squad and I hope tomorrow that you will see a team like against Sassuolo, as when we were aggressive we see the outcome. We need to find continuity in our performances over the long-term.”

Has Guarin convinced in this position? Will we see Palacio tomorrow? “When you play every two or three days I need to rotate the players. Today in modern football you have to do the most and everyone must be at their best. Sometimes players lack the psychological or physical energy required and then I must take note. Guarin has done well in Ukraine, I knew this when he began to drive forward and shoot. Against Palermo he also did very well but we must see if he can make it for a third game. I must consider that if I want fresh legs in the midfield I must look at the players that are fresh. Guarin will play in that position if he is in better shape than others, but that is the case for all roles. Palacio may play form the beginning and we will see how long he lasts. His ankle does not seem to bother him but we will see how it is when he plays.”

When asked about the explosion of Kovacic: “I had hoped for it and from the tactical point of view he has improves, not only in the final move. He takes fewer wrong steps and passes the ball with the right timing. He moves well without the ball and has better defending as he has trained very hard. He will still improve and has enormous potential.”

Is there a problem with Hernanes? “Apart from the other night at Palermo, which did not happen because of him, I’ve never seen him negatively. Against Sassuolo he got two assists, but someone like him expects more. Hernanes knows this but he is quiet, he is not as his top but in time. Soon he will be decisive in the results as he has been previously. At Palermo is was complicated and even the change in formation could not help him.”

Was the idea to introduce the trident meant to reduce the number of draws? “It is easy to say that we have to win and the coach must have courage. He must assess the team based on many different aspects. At Palermo for 20-25 minutes we only missed the goal, but I wanted to show a winning mentality because I thought it was necessary to win at the risk of losing because of two wins and one loss is better than one win and two draws, even if losing is never desired. You have to take risks in a club of this kind, when you need to convey a mindset to new players and those who were already here. Members of this squad have not won much thus far and you must do so at a club such as Inter.”

When asked about the position of Hernanes and Medel: “Hernenaes did well in Turin when he was moved back and he may start in that position. Medel; however, cannot play from midfield because he has always played in front of the defense and on the defensive line and is not one to attack space. He has different qualities to be used for his role.”

When asked about the impact of Palacio: “He can do anything well: second striker, central, from the outside. He is a modern player who helps the team but must find fitness. Compared to the other two strikers he can fill multiple roles.”

When everyone is fit, will you start the trident? “We will see as I must first look at the interests of the team because we want to score more than the others. Against Palermo I put the trident on but I am not sure if that was better. It depends on the balance and condition of the whole team.”

Are you worried that moving up splits the team’s focus? “We are all experts of Italian football. In some clubs it is normal to have expectations. According to me a clubs project must be clear and must be honest with the fans, and it is easier with the knowledge that the team is doing well. Evaluations must be made beyond the immediate result.”

The fans asked for the scudetto last summer: “When I arrived I was asked for Europe in the Piazza Duomo in the year in which Inter did not participate. This year we walked into the Europa League through the front door. We are making evaluations and a new cycle has begun and the club has changed. In every department we have done well based on our evaluation. We have two draws and a win and we hope the result will arrive tomorrow. We are doing well in the Europa League, winning on a difficult pitch. Juve and Roma? It is easier to make assessments after the game. A serious club looks long term and it seems to me that beyond the immediate results the growth process is going well. Tomorrow is another match and we must have clear ideas.”

How satisfied are you with the renewal of Ausilio? Could Dodò play on the wing in a trident? “I could play him there as he has quality. Until we have more quality players he will be most useful on the wing. Changing the formations against Palermo created some problems. Ausilio did some excellent work and everyone here does their part. If the club has made that decision than it means he has done well and I am happy.”

Is Icardi physically ready for tomorrow? “Consultations will be done and I will assess this and decide tactically against Atalanta. Mauro trains well, he ran at Palermo for 90 minutes and pressed until the end. Against Palermo Osvaldo seemed a bit tired and is a little bit behind Icardi.”