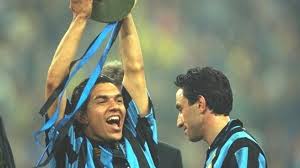 Every week SempreInter.com editorialist, Richard Hall, takes a look back at the glorious history of Inter by highlighting a certain match, hero or any other event in Inter’s history worthy of being labelled Nerazzurri Classic’s. Ahead of tonight’s home fixture against Sampdoria, Richard looks back at a fixture between the two teams during a season that almost led to Inter being relegated from the Serie A.

The 1993/94 season was one that embodied the term ‘crazy Inter’. It combined jubilation with despair and amazement with fright. Inter managed to win the UEFA Cup beating Casino Salzburg in the final but incredibly almost fell into Serie B in the same season. The Nerazzurri only escaped relegation by a solitary point and the club was sold by Ernesto Pellegrini the following season to Massimo Moratti. The inconsistency of Inter in the league was incomprehensible and the end of season brief was fraught to say the least.

There were few highlights in the domestic campaign and it was only Ruben Sosa’s sixteen goals helped save the team from total destruction. Defeats in both Milan Derbies, a win and a draw against Juventus and only three points taken against the Roman clubs left for sorry reading. When a good Sampdoria team came to town, hopes were not high. In the build up to the game the Nerazzurri had lost the Derby 1-2, then been beaten away at Genoa, next they 2-2 with Juventus before beating lowly Lecce 1-3.

Sampdoria on the other hand had Ruud Gullit and Roberto Mancini, combined with playmakers David Platt and Attilio Lombardo they looked daunting to say the least. Sampdoria had accumulated five wins on the bounce before drawing the Derby against Genoa the week before. They had taken the scalps on Milan, Torino and Foggia, Cagliari and Cremonese in the process. The game kicked off on a fine Sunday afternoon in the San Siro. Inter gained an early free kick that was swung in by Ruben Sosa. For once their luck was in and to the surprise of the entire stadium; the Nerazzurri took an early lead courtesy of Sergio Battistini, his towering header beating a static Gianluca Pagliuca.

Gullit and Sampdoria were not going to fold after this early upset and it was a free kick from the Dutchman moment later that nearly brought them level. Zenga saved well and things looked like for once they may be going Inter’s way. Wim Jonk and Ruben Sosa both had efforts well saved by Pagliuca in the first half before another good ball in from the left found Nicola Berti climbing with Vladimir Jugović. The header seemed at first to have been put in by Berti but a later look saw that it was the Yugoslav and not the Inter man who had put the ball in his own goal.

The second half started as the first had ended with Inter on the ascendency. Only eleven minutes had been played in this period when Davide Fontolan was brought down in the Sampdoria box for a penalty. Up stepped the much criticised Dennis Bergkamp who slotted the ball low to the left sending Pagliuca the wrong way.  The game finished 3-0 to Inter and was one of the few chinks of light in a season filled with turmoil.