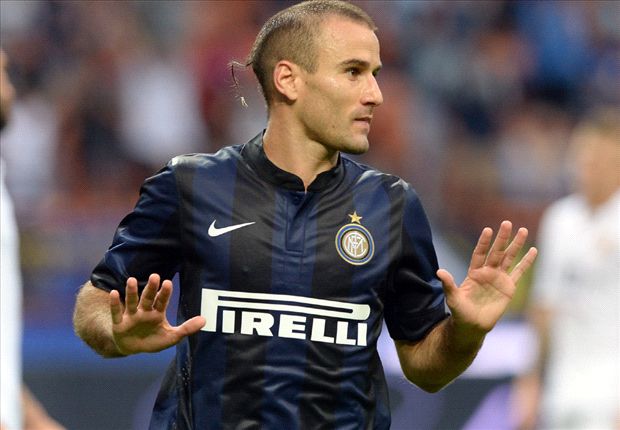 Today Inter took on Lazio at the Meazza in their final match before the winter break. The Nerazzurri were looking to get a positive result in order to make up for the numerous wasted points so far this season and to end 2014 on a high note. Inter went in to this match in 11th place in the Serie A with 20 points; however, Lazio were sitting in 5th with 26 points on the trot, only six points above the Nerazzurri.

Mancini welcomed the return of Hernanes to the team, although he also had to deal with the loss of Osvaldo, who had been granted compassionated leave due to a loss of a family member. Moreover, Jonathan has remained out, continuing what has been a lengthy spell on the sidelines. Notably Lazio were also without Italian international Candreva, as well as Lucas Biglia and Michael Ciani. Inter’s starting lineup surprised many with Mancini dropping Gary Medel and starting D’Ambrosio and Dodo in defence with Nagatomo also getting the nod but in an advanced role on the left.

Inter began this game in an incredibly sloppy fashion with the players seeming almost as confused about the tactical change as their supporters. Lazio took advantage of the disarray in the Nerazzurri positioning by exposing Inter’s flanks. An Anderson run through the midfield was not tracked and the player was free to latch on to a cross and walked around Ranocchia before putting Lazio up 1-0. Anderson should have put Lazio up 2-0 after just 5 minutes at the Meazza, as player was left totally unmarked at the back post; however, he volleyed over from point-blank range.

After 10 minutes the shape seemed to change, with Inter moving to a 4-3-3, as Dodo appeared to join Icardi and Palacio up top. Once this change took place the build up play seemed to slightly improve and Inter began to have a few more chances going forward. Unfortunately Inter continued to look chaotic in defense and the counter-attack remained consistently poor. Guarin began the game with some good chances; however, the player is kryptonite to Inter’s counter. If he isn’t over-hitting a pass he is just slowing the entire move down by taking too many touches. I probably sound like a broken record at this point but Inter’s service to their strikers was abysmal and crosses seemed to be landing everywhere but on our striker’s heads.

At the 30 minute mark Inter seemed to be working their way back into the match and were holding the play in the Lazio. However, once again Ranocchia was exposed on the right side when he gambled by stepping up to beat Anderson to a ball. The Lazio player walked past Ranocchia and then broke into the Inter box, faking out Juan and putting the ball past Handanovic, while Kuzmanovic weakly poked at the ball. This is precisely the reason why Medel is so important for Inter. He breaks up the play, protects the Nerazzurri back line from the chaos that is Ranocchia and he always goes into challenges with purpose. Mancio confirmed this obvious deficit by replacing Dodo with Medel right before the half. Reinstating the 4-3-1-2.

Before the second half began I went and retrieved my computer from where I had thrown it in the road and turned the match back on. Inter started the second half better than in the first and were taking the initiative with Icardi just missing from a Kovacic back pass and Kuzmanovic having his tipped shot well saved by Marchetti. However, the Nerazzurri did eventually pull one back, and in style, as a Kuzmanovic corner was cleared into the path of Kovacic who buried a screamer of a volley, first time, into the top corner of the net.

After the goal Inter were piling on the pressure and Mancini smartly replaced the wasteful Guarin with 17-year-old Federico Bonazzoli. The primavera superstar made an immediate impact for the Nerazzurri, taking a perfectly placed free kick into the box to D’Ambrosio who nodded to Palacio and Rodrigo made no mistake. Palacio deserved the goal after such a long drought, as the player worked hard tonight and showed some of the fire that has been missing from his game. Numerous times I say Rodrigo make those runs out to the wing, holding off defenders and working the ball back into the middle.

Inter almost added a third soon after the Palacio goal through Kovacic. His header was palmed just over the bar after a disparate dive from Marchetti. The last ten minutes of the match were dominated in possession by Inter, who pushed forward with intensity but could not produce another goal. Inter are plagued by ineffective crossing and one could only imagine what the results would be if we could properly serve our strikers. Unfortunately D’Ambrosio had to be substituted in injury time after pulling up with what looked like a muscle injury and the game ended soon after.

At the end of the day matches need to be played from the 1st minute until the final whistle and Inter simply did not do this. They started soft, they gave up soft goals and they lost two points because of it. Mancini’s starting lineup did not work out tonight and leaving Medel on the bench exposed Inter in a serious way. For this the coach should shoulder some of the responsibility. Fortunately the mercato will re-open in the January and although I am not blindly optimistic, I hope we can plug a few of the gaping holes in the current Inter squad. This includes getting rid of our dead-weight captain and the pigeon-killer Guarin. In terms of ratings, this team is becoming more and more difficult to quantify, as some defenders shine, while others falter and some midfielders show brilliance while others are wasteful.

On a positive note, Palacio can get some much-needed rest during the Inter break and hopefully we can see something resembling the Palacio that we have seen in the past. Special mention should go out to Kovacic for a fine goal and some great runs, although the player needs to take fewer touches with the ball and make the ball work for him more often. Defensively, the addition of Medel changed the game and the player should be a staple in the Inter starting 11. Lastly, Juan Jesus showed a ton of grinta once again tonight and performed well for most of the match, often saving his defensive partner.