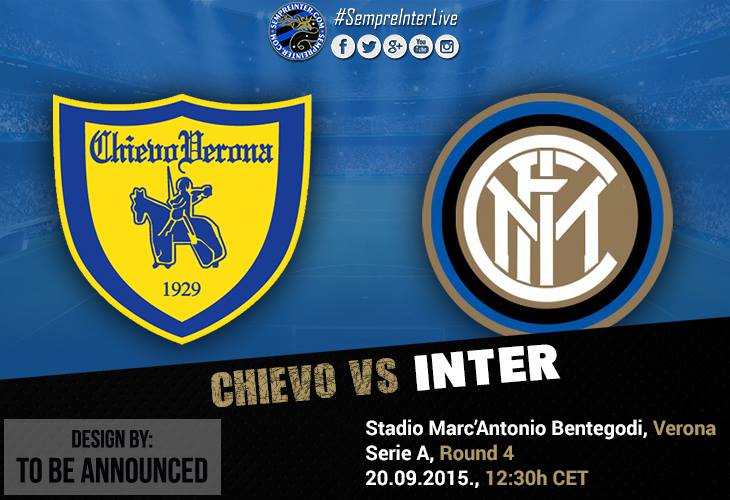 Inter travel to the Stadio Bentigodi this Sunday 20 September to face Chievo (kick off 12:30 CET) in what is a surprise top of the table clash in week 4 of the Serie A season.

Inter come into this game in great form with three wins in a row against Atalanta (1-0), Carpi (2-1) and Milan (1-0) in the Derby last weekend and now Inter fans are asking the question: Can Inter really challenge for the Scudetto?

It is too early in the season to answer that question but against Milan, Inter showed they have character and will not be bullied. Despite the first 15 minutes in which Inter looked nervous they grew in to the game and eventually won a game that last season they would have drawn or lost.

Inter sit top of the Serie A table for the first time in 5 years thanks to their 100% record of three wins out of three.

Rolando Maran’s Chievo side have been a surprise package this season. When the fixtures threw out Empoli, Lazio and Juventus in the first three matches, not much was expected from the ‘Flying Donkeys’ but a 3-1 away win at Empoli followed by a 4-0 destruction of Lazio gave the side confidence going in to the match with Juventus.

In that Juventus match, Chievo were very unlucky not to win after they were on the end of some bad refereeing decisions but a 1-1 draw at the home of the champions sees Chievo sit in 2nd place in the standings on 7 points with goal difference favouring them ahead of Sampdoria, Torino, Roma, Sassuolo and Palermo who also have 7 points after three matches.

Here is the Inter team news and probable line up as reported by La Gazzetta dello Sport:

Samir Handanovic starts in goal with Davide Santon expected to start at right back. At centre back Joao Miranda is still struggling to overcome his knee injury so Gary Medel should deputise again, to be partnered alongside Jeison Murillo.

At left back Juan Jesus misses out after arguably his best game in an Inter shirt in last weekend’s Milan Derby with the Brazilian picking up an ankle sprain so Alex Telles could start for the first time.

The midfield is set to stay the same with Felipe Melo alongside last weekend’s match winner Fredy Guarin and Geoffrey Kondogbia.

The big news in the attacking trident is that Roberto Mancini is set to give Adem Ljajic his Inter debut in place of the in-form Stevan Jovetic. Ivan Perisic and Mauro Icardi are set to start as well.

Inter lead in the meeting between the sides at the Stadio Bentigodi with 7 wins to Chievo’s 3 wins with 3 matches drawn and an Inter goal difference of +9.

Overall in the 26 matches between the teams, Inter have 15 wins compared to Chievo’s 4 wins with 7 matches drawn and an Inter goal difference of +10.

In the match at the Bentigodi last season, Inter won 2-0 thanks to goals from Mateo Kovacic and Andrea Ranocchia.

Chievo’s last win against Inter came 2 seasons ago on 18 May 2014 when they won 2-1. Marco Andreolli had given Inter the lead but it was former Inter man Victor Obinna who won the game with a late double.

Player to Watch: Mauro Icardi – Last season’s top scorer needs a goal to get him started. The striker looked rusty last weekend after an his injury on day 1 but with the player improving fitness wise this could be a good chance for him to get his first goal of the season.

Author’s Note: This will be the start of an important week in which Inter will play 3 games in 8 days. If Inter can get 3 wins this week it will show that they really mean business this season. The game at Chievo will be tight but I think that Inter should be beating teams like this if they want to push for the title. A win here would set Inter up for a double header of home games against Hellas Verona and Fiorentina.

Let’s do this. Forza Inter!