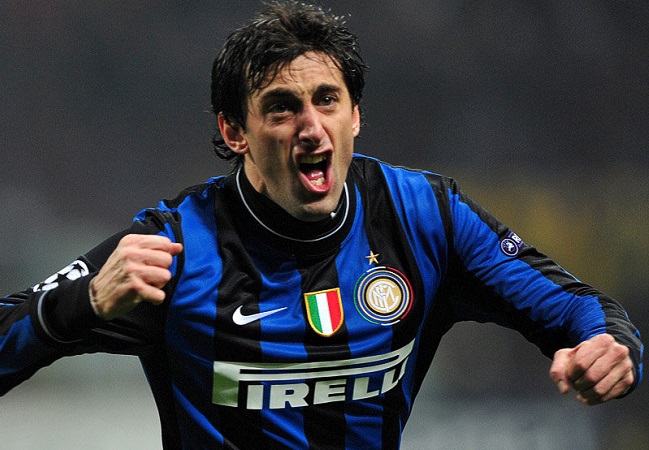 A story that was five seasons long, peaked in 2010 when he won five trophies with Inter as one of the obvious protagonists. Diego Milito retraces the best moments of his time in football in an interview with Undici:

When you arrived you put your feet in the team of Zlatan Ibrahimovic.
“I joined the group in the United States and did the preparation with him. We also played a friendly match together. Honestly, I don’t know what José Mourinho did, but it would have been an honor to play with him. In training it worked well! However, I can’t complain. Samuel Eto’o arrived and we had a fantastic season.”

Early in the season you were not the number one on the team. Did you feel the pressure of playing with many prestigious names?
“I must admit that at thirty, Inter represented an incredible opportunity to play for a big club and in major competitions that I had never played in before. This is why I came with an enourmous desire. And I immediately felt in tune with the fans of Inter. In Boston, we played a ‘friendly’ derby and we won 2-0 after I scored one of the goals.”

And Gattuso went crazy:
“Even better, I made a tunnel (actually three, ed). The audience appreciated it but those are game situations. It was much more important to win 4-0 in the second round of the league; I scored a goal and made two assists. Love at first sight.”

Eto’o arrived as a European champion with Barcelona, ​​but he had to play on the wing. How was that decided?
“In fact, we started playing with two central attackers and Wesley Sneijder behind in 4-3-1-2. It worked great, up until the match against Chelsea at San Siro, in the round of 16. We were in trouble, and then Mario Balotelli enterred and Mourinho told him to play on the right wing with Eto’o on the left. We played well and the formation stayed that way, with Goran Pandev on the right.”

How is it possible to combine the egos of two big bombers?
“I must say that everything was fantastic with Samuel. Not everything depends on the talent or training, the mentality counts a lot. And in this kind of situations, it is the intelligence that makes a difference. That of Samuel, of course! He is a great champion, he has worked so hard. I felt really privileged. There was a great feeling between us, we got along easily, we took turns taking the penalties. There was no problem.”

What were the reasons you won the Treble?
“The intelligence and strength of an amazing group. In this team there was a great confidence in our abilities. We knew exactly what we were doing. And then the objective was magnificent. We were all united: the enthusiasm of President Massimo Moratti, who was like a father to us, the joy of the fans, the relief of the many players who had been waiting for this victory for a long time like Zanetti, Samuel, Maicon, Stankovic, Julio Cesar. Marco Materazzi, for example, was very important with his experience. He was very cheerful, always in the right mood. We had great talent but also the type of players that makes a difference within the group.”

A symbol of the intelligence?
“If we talk about intelligence, I must mention Cuchu Cambiasso. I’ve known him since we were kids, therefore it was a nice to experience these victories together. He has always had a coach inside of him. He is a player who lives for the game and its secrets.”

What about Mourinho, then?
“It was he who put together the good parts. He’s a super prepared coach who knows the game very well and knows how to manage each player. He has the gift to understand the dynamics of each group. I’m not going to reveal the discussions or the details of the group because I believe in the personal privacy of the dressing room, but in a sense, Mourinho managed to maintain our motivation from beginning to end. I was already thirty years, but I played one season with the desire of someone who plays for everything.”

On the evening of the final in Madrid you surprised everyone by saying: “I have important offers, I don’t know if I stay.”
“That phrase… Let’s say it was a mistake to talk about it, I made a mistake. Maybe it wasn’t the best moment. There were contacts with certain teams but I can not disclose which.”

Then there was Leonardo’s PSG:
“I prefer not to say anything, I’m sorry.”

And not being present in the list for the Ballon d’Or?
“I have no answer. I don’t know why. I don’t know what influenced that and what could have changed it. But I was loved and respected everywhere I went. I will always be grateful to this sport, I have no regrets. I played a World Cup, I won the Champions League, I played in the Copa America twice, I realized most of the dreams I had as a child. I would have liked to have played with Ronaldo or Zinedine Zidane or have been coached by Pep Guardiola, Carlo Ancelotti and Fabio Capello, but it would be unfair to ask for more.”

Alex Ferguson said that in his eyes you were the favorite to win Ballon d’Or 2010:
“I heard that. When beautiful words come from such a prestigious coach who knows so much about football, for me it is as important as the title itself. It’s an immense pride.”