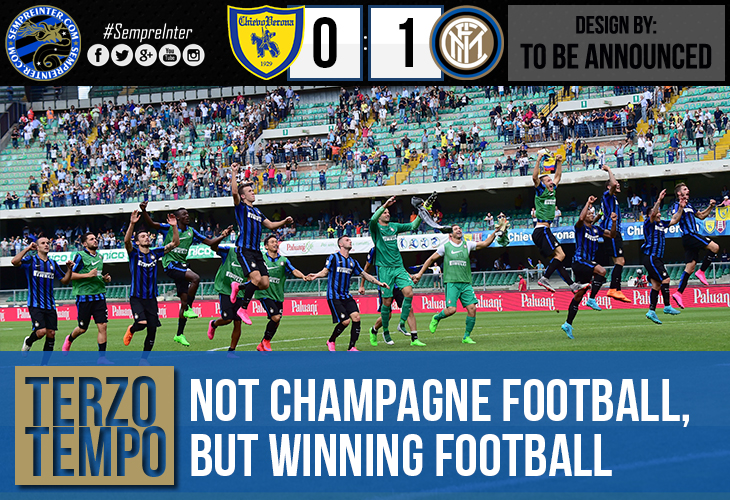 Inter travelled to Verona with the aim to stay perfect in Serie A. The Nerazzurri went into the match against the “Flying Donkeys” on the back of three wins out of three. The Veronese club started their campaign on the right foot as well. Maran’s side defeated Chievo and Lazio, and held Juventus to a draw in Turin. This match at the Stadio Bentegodi had all of the ingredients to be a thriller.

Roberto Mancini was without Joao Miranda due to injury, so Gary Medel was slotted next to Jeison Murillo in defence. Mancini fielded 10 out of the same 11 players that started against Milan last week. The only tactical difference was that Ivan Perisic played on the wing as opposed to a trequartista. Inter’s physical midfield looked to overpower their opposition, while Alex Telles made his first start for the Nerazzurri.  Chievo’s strengths lie in their defence and counter-attacking system. Alberto Paloschi, Walter Birsa, and Ricardo Meggiorini all went into the match on great form.  Inter were up against the same defence that conceded the fourth least goals in Serie A last season. Chievo are definitely no easy opposition.

The match started brightly, with Inter keeping possession, but not using it to great effect. Medel helped the team play out from the back, while Geoffrey Kondogbia and Felipe Melo helped shield the defence. There were no clear cut chances in the half, but both sides had their moments. In the 18th minute, Catrso met Birsa’s corner, but just nodded over at the near post. A minute later, Jovetic cut the ball back to Alex Telles, whose cross-shot was parried out for a corner by Bizzarri. Chievo attacked Inter deep in the Nerazzurri’s half, as particularly Paloschi and Birsa caused problems. Murillo’s passing was not up to par with Medels. The Chilean maintained a 100% pass accuracy rate in the first half. Medel also made a crucial clearance to prevent Meggiorini from meeting Paloschi’s cross. Inter finally struck in the 42nd minute. It was a goal out of nothing. Telles’s throw-in was dummied by Jovetic into the path of Kondogbia. The Frenchman then lofted a ball behind the Chievo denfence, and was met by Icardi. The Argentine took a touch over the diving Bizzarri, then fired home from close range. Inter 1, Chievo 0. Before the end of the half, Handanovic was tested by a stinging volley from Birsa, but Inter still ended the first 45 minutes in the lead. The half was rather dull, but Inter were devastating, as Icardi pounced on the only chance he was given. Perisic looked a lot better on the wing, while Jovetic had some nice touches. The midfielders continued to play aggressively, evident by the fact that both Melo and Guarin received bookings in the first half. Inter needed to close out the game in the second half.

The second half was a lot like the first. This time, Inter let Chievo take the initiative. The Veronese outfit tried resiliently, but Inter’s defence stayed strong. Kondogbia pulled of some great tricks in midfield, while Perisic ran by Chievo’s defence on a couple of occasions. There was bad news, as Murillo was subbed off due to injury, and Ranocchia came on.  Jovetic tracked back to great effect, while Melo helped slow down the tempo of the game. Guarin was a shadow of himself in the Derby. Santon was solid at right back this afternoon, and made some nice challenges. The best chance of the second half was all started by a “coast to coast” run by Ivan Perisic. The Croatian winger took on the entire Chievo defence, but delayed for a little bit, and the cross to the free Icardi was blocked. Inter finished off the match in good fashion, and took 3 points once again. Kondogbia was the man of the match. The Frenchman’s physical presence and skill helped Inter control the game, and the assist to Icardi was fantastic. It was not champagne football, but winning football. However, Inter must improve, and the performances are important.