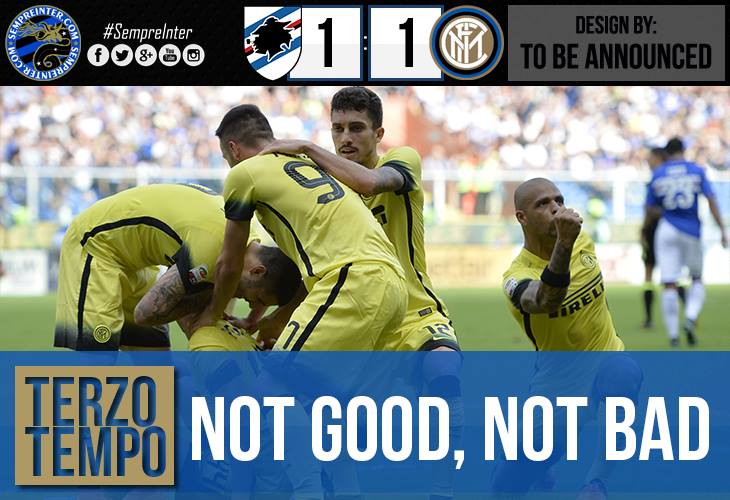 Roberto Mancini returned to a 4-3-1-2-ish formation after the match against Fiorentina. Handanovic was sitting under the goalposts with Santon, Medel, Murillo and Telles in front of him from right to left. Felipe Melo was playing in front of them with Guarin and Kondogbia at the sides of the diamond. Perisic was oriented towards the flanks usually moving to the side the ball was and rarely staying for big periods behind the forwards. Up front, Palacio played slightly behind Icardi, moving laterally and vertically many times to help with the build up. Icardi was much more static this time, waiting near and inside the opponents penalty area.

Both full backs played high up the pitch at the same time. Kondogbia was helping Melo with the build-up only when the Brazilian was marked or pressured, otherwise, together with Guarin he was moving higher up the pitch than usual waiting for a pass behind Sampdoria’s midfield of making runs towards the penalty area.

Walter Zenga lined-up his team in a pretty basic 4-1-4-1/ 4-5-1 shape with Fernando protecting a defensive line of Pereira, Moisander, Zukanovic and Mesbah. Soriano and Barreto were the two central midfielders with Correa and Eder supporting Muriel up-front from the wings.

Sampdoria’s full backs were getting higher up the pitch only when the ball was on their side combining mainly with their side’s winger through overlapping runs. On defense the wingers were usually moving in relation to the Inter FBs, sometimes creating a five-man defense. Muriel was not pressuring the centre backs but was cutting the passing lanes to Felipe Melo instead.

Zenga’s team based their game on one of their best assets, their fast transitions from defense to attack. Sampdoria never had a problem with Inter holding the ball for long periods of time, sitting back in a low defensive line and waiwaiting for a counterattack.

With both full backs high up the pitch at the same time and Sampdoria willing to sit back and not put big pressure on Felipe Melo, Inter had sometimes 4 players (Melo/ Murillo/ Medel and Handanovic ) behind the ball and with Melo sometimes getting closer to the opponent’s area, space between the those three or four players and the rest of the team was huge.

With Inter not pressing (or when they did, not in an organized manner), the opponent immediately after the ball was lost and Guarin and Kondogbia returning very slowly, Sampdoria had big spaces to run into and cause chaos in the nerazzurri defense.

In the above picture you can see three spaces that need protection ( one on each side of the defense and one in front of it). With only Melo staying back most of the time and Kondogbia/Guarin returning slower than they should have, the Brazilian was left exposed with 3 or 4 players running at him, also passing the ball from one of those spaces to the other.

Fernando is being dragged and Inter loses the opportunity.

With Fernando marking the players that move between the blucerchiati midfield and defensive line, the Brazilian was usually getting dragged out of position, leaving his centre backs exposed to passes from deeper ( see the black arrow in the above picture). But Inter never took advantage of this situation. For example, in a situation like that, Icardi could have acted as a target man, passing immediately to Palacio and Perisic to shoot.

Inter tried to force Sampdoria into long balls, either on goal kicks, as in the above picture or on when one of the defenders had the ball, by cutting his closest passing lanes (picture below).

(The yellow triangle is a shadow cover, which means that the defenders positioning is in a certain way that cuts the passing lanes in the space the triangle covers behind him).

With Sampdoria scoring, Mancini changed the shape after 12 minutes, replacing Kondogbia with Biabiany.

Biabiany was playing as a right winger with Perisic on the left and Palacio slightly behind Icardi. Guarin and Melo created a double pivot in front of the defense.

Inter’s shape was now much more stable defensively. The wingers on the flanks meant that there was no need for both the fullbacks to be high up the pitch at the same time as they were before. Instead now, the fullback on the other side of the ball was staying closer to the CBs.

On defense Inter’s shape resembled a 4-4-1-1 after the substitustion, with Palacio cutting the passing lanes to the opponent’s defensive midfielder.

After Manaj replaced Palacio, the Albanian youngster played closer to Icardi, and was more static waiting to cause problems inside the penalty area.

With Perisic and Telles playing now on the very inexperienced Pereira’s side, Zenga chose to put Baretto in front of him and bring Eder to the other side, in order to protect the youngster with a much more defensive minded player.

Inter tries to win in the final minutes, but to no avail.

On the 88th minute, Ljajic was brought in, replacing Santon in order to bring some flair and his dribbling ability to the game but had not enough time to make the difference.

Inter ended the game in that shape.

It was a game that Sampdoria should have probably ended before half-time with the chances they managed to create. However, with the Blucerchiati wasting their chances Inter should have left the field with a bittersweet feeling . Miscommunication between the players ( Biabiany getting a header from the unmarked Manaj/ Manaj having his back some metres in front of goal but never passing to the unmarked Santon), and very bad crossing were two of the biggest reasons why Inter never managed to score a second goal and get the three points.