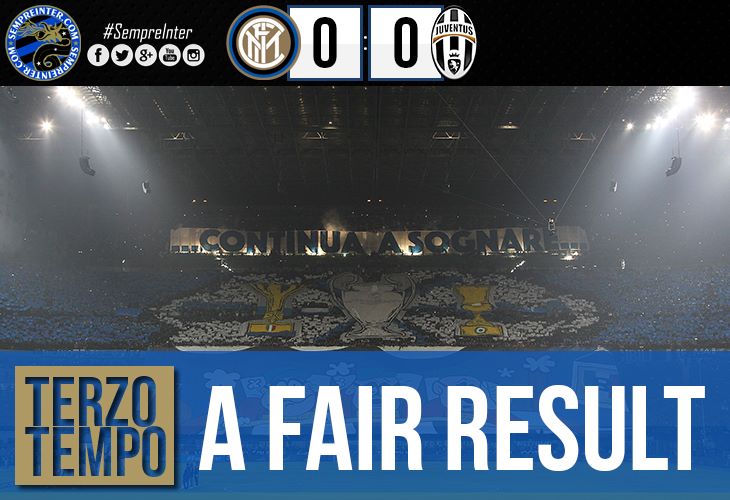 Inter and Juventus faced off at the San Siro in a bid to collect all 3 points.  The Bianconeri looked to have got over their early season slump, while the Nerazzurri aimed to return to winning ways after a two match winless streak. Roberto Mancini and Max Allegri made some surprising selections to their respective starting elevens. Mancini fielded a 4-3-3, with Juan Jesus at left back. Marcelo Brozovic, Gary Medel, and Felipe Melo made up the midfield, while Mauro Icardi was partnered with Stevan Jovetic and Ivan Perisic in attack. Allegri had the luxury to play his ideal players together for the first time this season. Juve played a 3-5-2 with Sami Khedira, Paul Pogba, and Claudio Marchisio in midfield.  Simone Zaza made a surprise start to partner Alvaro Morata up front.  This match always looked like it was going to be a tight affair.

The match started out with both teams taking minimal risks. Stevan Jovetic dropped deep to receive the ball, while Marcelo Brozovic moved the ball very well. Juventus has the first chance in the 4th minute, as Samir Handanovic beat out Juan Cuadrado’s drive towards his near post. Soon after, Inter woke up. The Nerazzurri began controlling the game, as the midfielders stepped it up a gear. Ivan Perisic delivered some fantastic crosses, but Andrea Barzagli was a dominant force in the area. In the 25th minute, Jovetic was through on goal, but Buffon closed down his angles well to block the shot. In the 35th minute, Brozovic nearly scored one of the goals of the season. The Croatian’s strike from the corner of the penalty area was tipped onto the crossbar by Gianluigi Buffon. Inter continued to move the ball around nicely until the half. The Nerazzurri were in control for much of the first half, and Stevan Jovetic’s movement accompanied with Ivan Perisic’s wing play cause Juve problem. Things changed in the second half.

Max Allegri fired his team up during the break. Juventus began keeping possession well, and the defense looked a lot more solid. After only 2 minutes into the second period, Simone Zaza stripped Jeison Murillo of possession , then fed Juan Cuadrado, who was denied by Samir Handanovic. In the 59th minute, Stevan Jovetic’s clean strike was saved by Buffon. Juventus went on to control the rest of the match. Samir Khedira was fantastic in possession. Juan Cuadrado caused Inter’s defense all sorts of problems with his trickery on the wing. In the 68th minute, Khedira had all the time in the world, but struck the post. Jeison Murillo continued to make some spectacular last-ditch challenges. Inter had two freekicks just outside the area in the last 10 minutes, but none of the chances were taken. The match finished 0-0.

This clash was a tale of two halfs. Inter controlled the firs, Juve, the second. The best players on the pitch for Inter were Murillo, Brozovic, and Jovetic. The Colombian was fantastic at the back, and made some key interventions. Brozovic helped Inter dominate the first half, while Jojo always looked to get involved. Juventus’s top players were Andrea Barzagli, Juan Cuadrado, and Sami Khedira. Barzagli made Icardi look invisible on the pitch. Cuadrado was the Bianconeri’s most dangerous player going forward, while Khedira helped Juve maintain possession. Overall, it was a fair result, and both sides failed to capitalize on golden opportunities.