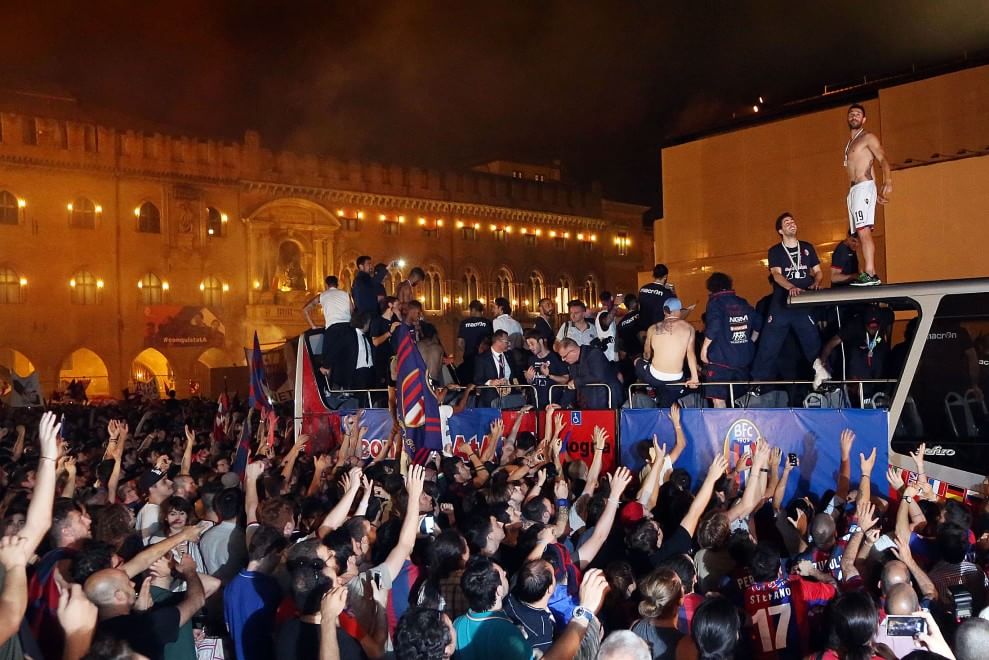 Let’s go back to May 18th, 2014. Bologna’s fate was already known. The club was destined to return to Serie B after 6 seasons in the top flight. The Reggio Emilia side put up no fight, and lost to Lazio on the final day of the season.  That very season was a disaster for the club and its fans. Stefano Pioli was replaced by Davide Ballardini midway through the season, but the results were not convincing. Then the exodus began. First team regulars Nicolò Cherubin, Rolando Bianchi, Panagiotis Kone, Lazaros Christodoulopoulos, and Rene Khrin all left the club at the end of the season to join teams that remained in Serie A. The club needed a restart. A change was needed. In this article I will be talking about how Bologna recovered from their disastrous 2013-14 campaign in Serie A, and how they can cause Inter trouble in tomorrow’s clash.

Bologna sold a majority of their first team. A new approach was needed in order to get results and balance the books.  New ownership took over in September, which would change the mindset and mood at the club. American Joe Tacopina bought Bologna FC in October 2014, and assumed the role as club president. Bologna began the season well, but their form began to tail off. Tacopina had a master plan in store to bring the club back to Serie A. Tacopina brought in experienced sporting director Pantaleo Corvino at the end of the calendar year. Corvino is known to be a great sporting director, and he his contributions to Bologna payed great dividends. In the January transfer window Bologna brought in a plethora of experienced Serie A players: Nenad Krstičić, Gianluca Sansone, Daniele Gastaldello, and Angelo da Costa were all brought in from Serie A sides during the January transfer window. Inter youngster Ibrahima M’Baye was also signed. These acquisitions helped Bologna reach the promotion play offs, where they won on away goals in both rounds against Pescara and Avellino respectively. The club returned to Serie A after only 1 season due to a great management, and the fighting spirit of the experienced squad.

Bologna had a fantastic summer transfer window. After securing promotion to Serie A, the club began to convince some of the most consistent players in the league to move to Reggio Emilia. Bologna made a seriuos sign of intent when they bought Roma striker Mattia Destro. It was only one year ago when the Italian was wanted by some of the top European clubs. Antonio Mirante arrived for free from Parma, and was wanted by some top Serie A clubs before joining the Rossoblu.

Another fantastic move made by Corvino was the signing of Emanuele Giaccherini. The former Juventus player was destined for great things in Turin, but injuries have blighted his career. Now back in Italy, Giaccherini is intent to return to the form that got him selected to play in Euro 2012 with the Azzurri. Saphir Taider returned to Bologna for a loan with an obligation to buy. Godfred Donsah was wanted by the likes of Napoli and Juventus, but joined Bologna instead. Anthony Mounier was signed from Montpellier, and the winger adds creativity and pace to the attack. The Rossoblu attracted some fantastic players this past summer, and are intent to be main stays in Serie A.

Breaking down Bologna’s season so far

Bologna have been struggling to get results so far this season. Some issues should be expected, as this is a completely new team, and the players will need time to gel together. The Rossoblu’s main threat comes in the form of French winger Anthony Mounier. The pacy attacker has scored 3 goals so far this season, and could cause the Nerazzurri problems. Mattia Destro is yet to get off the mark this season, and is hungry to make an impact. Bologna have only notched two wins so far this season, are are in 18th place in the Serie A table. The team looks good on paper, but the results have not come yet and coach Delio Rossi is under pressure. The manager could get sacked if his side lose to Inter tomorrow. Although Bologna have a good team, Inter should be expected to win this match. Roberto Mancini has no excuse if his side does not get the full 3 points.  Overall, Bologna have a solid team and an intriguing project, and they could cause Inter some problems.