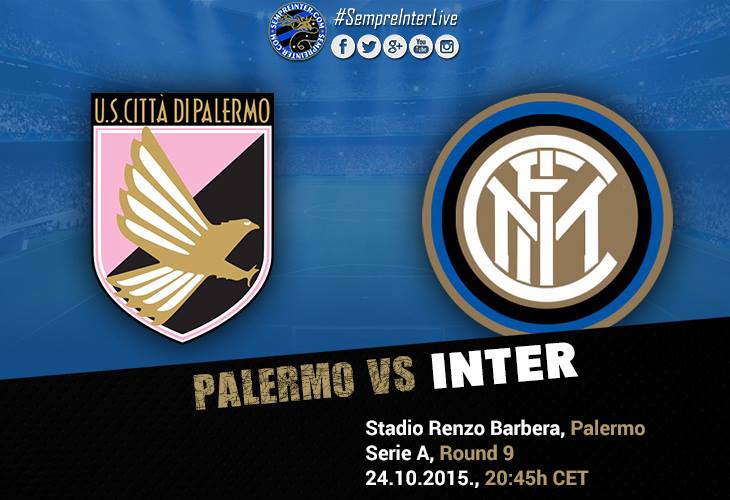 Roberto Mancini lined-up his team in a 4-2-3-1-ish shape, with Samir Handanovic under the posts, behind a defence of Telles, Murillo, Miranda and Nagatomo (from left to right).Telles and Nagatomo were moving up the field only when the ball was on their side with the other fullback staying close to the centre backs. Medel and Kondogbia were protecting the defense, with the one closer to the ball helping the fullbacks to defend against Palermo combinations near the sidelines. Behind, the standing and waiting for good passes, Icardi, was Jovetic with Guarin on his right and Ivan Perisic on his left.

On defense Inter played with two compact lines of 4 with one forward coming close to the ball, to initiate a counter-attack and the other waiting upfield together with Palermo’s defense. Jovetic was, also , responsible for cutting passing lanes to Maresca especially if Palermo were trying to build their game from the back.

Giuseppe Iachini fielded his team in a 3-5-2/5-3-2 shape, with the two wing backs, Lazaar and Rispoli, providing the attacking width. The 3 centre backs were staying centrally all the time instead of moving towards the side of the ball, with Rigoni and Hiljemark responsible for helping the wingbacks defend near the sidelines. Strunar was also joining the midfield when needed on attack. Maresca was the deepest midfield player, protecting the defense but not being afraid to leave a big space between him and his defense when he needed to join the attack. This lack of “fear” came from the fact that Palermo had a numerical superiority of 3 versus two at the back, which meant that even if Icardi or Jovetic tried to receive the ball in that space, they would have been followed by a CB, with still a 2 v 1 at the back for Palermo.

Franco Vazquez was the creative force moving towards the ball. On defense he was relieved of his defensive duties when the ball was reaching Palermo’s defensive third, and was instead searching for spaces in order to receive the ball and initiate a counter-attack.

Palermo’s defense on Inter’s half

On the first picture you can see how Palermo pressed Inter high up the pitch, a press which was initiated when one of the FBs received the ball.

On the second you can see Palermo’s shape on Inter’s half when not pressing. Focusing primarily on protecting the centre of the pitch.
Inter improves in the second half

Kondogbia started the second half some metres in front of Medel (diagonally), creating passing lanes that were more easy to find in order to move the ball upwards. That was in contrast with first half, when the two were creating a double pivot, even on attack, sometimes unnecessarily occupying the same space.

Inter also lacked in attacking width high up the pitch. There were even times when both wingers (Guarin/Perisic) were in the centre of the pitch, creating an incredibly narrow shape and making it easy for a Palermo side that had 5 defenders, and that way was leaving no space between them.

Mancini solved that problem by bringing in Biabiany (Kondogbia out), putting the Frenchman on the side and Guarin as a DM.

Jovetic was also much more active on the second half, moving deeper in order to receive the ball, filling the space between him and the DMs that was almost never occupied in the first half. From a movement like that Inter managed to score the goal.

The combinations on the wings were much better also, with the wingers getting closer to the centre and leaving space for the FBs to overlap them.

After the equalizer and the last ten minutes of the game approaching, Mancini substituted the ineffective and static Icardi with Ljajic. Inter was very bad providing crosses and passes for the Argentinian, who also made 1 or 2 bad runs towards some balls that could have probably resulted in something useful for the nerazzurri.

With Murillo getting a second yellow card and Ranocchia replacing Jovetic to fill the defensive gap, Inter finished the game looking like this :

As you can see on the above image, Guarin was caught asleep the moment the goal was scored. It is evident, even from his stance (yellow) that he somehow “blacked out” during the goal not even moving closer to Gilardino( red).

Guarin was also responsible for wasting a great chance, when on counter-attack Inter were 4v3, with Biabiany and Jovetic running unmarked. The Colombian chose to shoot instead.

Inter made a great mistake, that was not taken advantage of, though, by Palermo. You can see on the image below, the big pink wall that Palermo created next to Inter’s wall in order to shoot the ball through it, while hiding the area of the pitch that Handanovic can see. This could have probably been avoided if one of the four players of the wall positioned himself where the colored bar is (since every other player is occupied). The fact, also, that Inter played with ten players made the matters worse.

It was a game that could have probably  gone either way and that also proved that if Inter want to compete for the scudetto, they need to impove their offense a lot in order to have a chance.