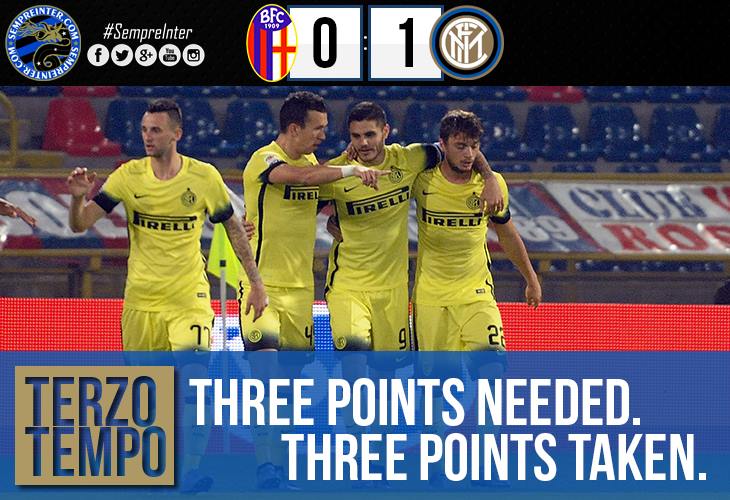 Roberto Mancini initially lined-up his team in 4-3-3, with the always present Samir Handanovic under the posts behind a defense of Juan Jesus, Miranda, Ranocchia and Santon (from left to right). Felipe Melo was protecting the defense with Kondogbia and Brozovic on either side of him. Perisic and Ljajic flanked Icardi, changing positions throughout the whole game. Perisic and Ljajic were also making inside movements behind the Bologna midfield line.

Although that last movement had some advantages, like dragging defenders out of their line and creating space behind the defense for Icardi to exploit ( see below picture), some problems quickly started to arise.

With Ljajic moving from the left wing in a “number 10 position” and Juan Jesus not moving closer to the sideline in order to provide offensive width, Inter were becoming very narrow, not stretching the Bologna defense at all and making life easier for their opponents defensively. (see picture below for the lack of width/ Juan Jesus is on the blue circle and Ljajic on the red one).

The lack of width forced Mancini to change his shape. 20+ minutes after the start of the game, Inter was playing in a 4-2-3-1 with Kondogbia and Melo protecting the defense and Ljajic/ Perisic/ Brozovic playing behind Icardi and changing positions all the time.

The change of formation certainly improved the width problem but many things still worked wrong. One of the problems that still existed was that with Ljajic moving closer to the wing to combine and move the ball and Kondogbia playing a bit lower than at the start, Icardi was usually alone, with no one near to combine at the central area of the pitch.

On the above picture you can see three Inter players(red) being needlessly at the other side of the ball, with no one near Icardi to combine (blue).

Bologna chose a very horizontally compact defensive shape (first image) on their offensive third, with the winger at the side of the ball pressing the Inter FB and the other winger with the striker man-marking Inter’s most far from the ball midfielders. That shape did not leave a lot of space near the ball, to the point were Inter could only circulate the ball aimlessly, but had a disadvantage. With a shape so compact towards the one side of the field, the other side was occupied only by an Inter FB, who had a lot of space to take advantage of after a good cross/pass to switch the play.

Before that screenshot was taken, Mounier had come closer to Melo in order to press him, leaving on his side a 1v1 with Juan Jesus against Ferrari. Inter took control of the ball and quickly changed side, passing to the Brazilian who attracted the young Italian, creating space for Kondogbia to exploit. (It was a situation that Inter should have probably tried to repeat more times).

Melo gets a red card

After the Brazilian received a second yellow card, the nerazzurri played with a 4-4-1 on defense that switched to a 4-2-3 on offense, with Brozovic and Kondogbia as defensive midfielders. The loss of one player was now evident on the attacking side.

With the two DMs protecting the defense, there was a huge space between them and the front three, forcing Inter to move the ball up only through the flanks, which are the worst area of the pitch to build-up play since you have one more defender there, the sideline.

Inter scored after a Bologna lost possession in front of their defense. As you can see Ferrari has moved too quickly up the pitch, leaving a huge space between him and the closest CB, which Inter exploited in order to score.

After the goal, Mancini brought in Guarin to replace the mediocre( in terms of crossing and connections) in this game Perisic. The Colombian played as a third midfielder during attack in a lopsided 4-3-2, with 3 central midfielders, Icardi as a striker and Ljajic to his left. (On defense it was still a 4-4-1).

That switch enabled Inter to have better control of the ball( due to the higher number of CMs and the less space between them) and better connections with the attackers.

Final minutes of the game

With Inter trying to preserve the score, Biabiany replaced Icardi on the 81st minute. Inter now had more freshness and speed in order to exploit spaces on counter-attacks and press, but the fact that the Frenchman was defending on the right, creating what was essentialy a 4-5 on defense, made it very difficult to initiate attacks due to his starting position on the offensive transition and the lack of a Target man presence to act as a pivot.

Palacio was brought in to replace Ljajic as the final substitution in order to solve this problem (Defense again on a 4-4-1).

One minute before the end, Bologna lost a huge chance.

With Ranocchia moving out of his defensive line in order to pressure an opponent, Santon was supposed to close that space and mark the opponent that moved into it. Fortunatelly, for the Italian, Handanovic saved the day with an amazing save.

Inter lacked cohesion and fluidity during most of the game, but got away with another win because of their quality and ability to take advantage of one big mistake their opponents made.