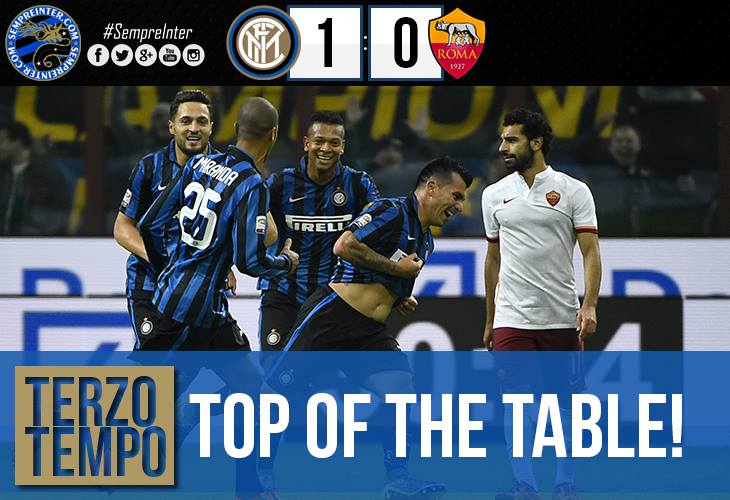 Roberto Mancini surprised many by choosing a formation that included the until this Saturday unused Danilo D’Ambrosio and the third choise left full back Yuto Nagatomo, flanking Jeison Murillo and Miranda on defense. Gary Medel was protecting the defense with Guarin and Brozovic on each side of him as CMs. Ljajic and Perisic were on the wings, interchanging positions all the time. Up front there was another surprise with the selection of, the fluid in his movements, Jovetic, instead of the more static Mauro Icardi.

Rudy Garcia chose once again to field his team in his favourite 4-3-3, with Salah and Gervinho on either side of Dzeko. Digne and Maicon were the two very attacking full backs, with Manolas and Rudiger on the middle of the defense once again this year. With De Rossi on the bench, Radja Nainggolan was the DM, with Pjanic and Florenzi, who were helping him in the build-up and making runs towars Inter’s area, some meters in front of him.

Inter faced a team with incredible pace/speed and technique on the wings, with two very attacking full backs who provide attacking width but also combine with their side’s wingers and closest midfielder. Roma also has a great target man in the name of Dzeko who can trouble even the tallest and strongest CBs on the air.

With this in mind, the usual tactic of protecting the centre of the field at all costs, leaving space on the sides was a big risk.

As a consequence, Mancini decided to protect his 4-man defense, by ordering that Ljajic and Perisic will track the runs and mark, primarily, the two Roma FBs who were also the players who provided attacking width. By having the two wingers mark these players, the defenders had the opportunity to stay closer together, leaving less space between them and also have a numerical superiority (4v3) against Roma’s forward trio.

Of course the problem now was, that Inter had two pacey and technical wingers starting their attacks (or counter-attacks to be exact) very far from Wojciech Szczęsny, being no danger. However their incredible work rate on both attack and defense and some slow returns from the Roma FBs made the problem less serious.

When Roma was building their attacks from deep, the Nerazzurri chose to stay deep (except one or two times when the ball returned to the GK and they decided to force the long ball), with the Gialorosso midfielder that tried to help the build-up, being pressured by the closest Inter midfielder. The wingers were also responsible for pressuring the opponent FBs.

This was a very important aspect of Inter’s defensive game. With the ball on Roma’s half, the Nerazzurri defense was naturally positioned on a height that left space behind them and Handanovic. So, with Roma having two extremely fast players like Salah and Gervinho ready to take advantage of a pass behind the defense, pressuring the player with the ball, not leaving him time and space for these types of passes, was of extreme importance.

In fact, one of the biggest chances Roma created was probably the only time when Adem Ljajic (Yellow) did not apply pressure to Maicon (Red), giving him the chance to play a long ball for Gervinho over the defense. The fact that D’Ambrosio and Miranda are not on the same line as the other two defenders, deprives Inter of another way to defend these types of situations, with the offside trap.

Mancini and Inter didn’t want to allow Roma’s overloads on the wings, with, sometimes, Gervinho and Salah being on the same wing and combining with the closest midfielder and the side’s full backs. They tried to solve that, by matching the opponents numbers, as in the 4v4 on the picture below.

Mancini tried to take advantage of the fact that the opponent had two full backs that played very high on offense and left huge spaces behind them and also two wingers that did not always track back, by having a forward trio without a classic striker that had fluid movements and the technique to cause problems to the Roma CBs, that were forced to defend near the sidelines in order to close the space behind the FBs.

This was also the first game that we saw Inter trying to overload the flanks in oder to gain either numerical superiority of qualitative superiority.

On the above picture you can see Inter creating a 5v5 situation in this small space on the right side of the field. Nagatomo makes a run from far, with Murillo making the pass behind the defense. Perisic occupies Maicon, leaving Nagatomo to run free. ( Salah is looking at the ball and forgets to track the run of Nagatomo).

Other than that, Inter tried primarily to attack on transition, being content with having to sit back and defend.

Gervinho and Salah had the duty of tracking the runs of the Inter FBs, sometimes creating a five man defense on their on defensive third. PJanic and Florenzi on the other had the responsibility to press the Brozovic and Guarin when they were getting closer to Medel in order to help with the build-up.

On the above picture you can clearly see Florenzi and Pjanic being close to Guarin and Brozovic, and being ready to press them. Salah is moving in relation to Nagatomo, with Gervinho ( right and down corner of the picture ), close to D’Ambrosio (out of the picture).

Giving such defensive responsibility to both wingers proved to be an issue for Roma with Gervinho(especially) not always tracking back.

Indeed, seconds before the only goal of the game, Gervinho was on the centre of the field after a defensive transition (instead of Pjanic), and did not track back the run of Medel that ended at the back of the net(see below).

Athough Roma had some problems on attack (such as, their 3 midfielders being unconnected with huge spaces between them), they showed some clever movements too, that because of either bad execution of good defensive cover by Inter did not result in something.

With Inter’s winger focused on tracking the FB’s run, Pjanic positions himself between Brozovic and D’Ambrosio, occupying both of them and creating space for Dzeko to run into after a Rudiger pass.

Dzeko, through the whole match, was trying to get an advantage over the Inter defense by positioning himself in between the Nerazzurri FBs and CBs and not between the two aerially strong CBs.

On the above picture you can see Gervinho occupying Murillo and Miranda, allowing Dzeko to position himself near D’Ambrosio, where he had an advantage on the air.

He also dropped, many times, between the lines but never managed to successfully combine with his teammates that tried to move in the space that was created behind him.

Final 20 minutes of the game

Roma’s game became much more difficult after Pjanic got a second yellow card.

In the final 20 minutes Roma was dangerous primarily through crosses and corners, but to no avail.

Rudy Garcia had replaced Florenzi with Falque , with no obvious tactical change, before replacing his best player in the air, Dzeko, with Vainquear in order to equal the missing numbers on the centre of the field after the red card.
His final substitution did not seem to change anything tactically either with Iturbe replacing Gervinho.

Mancini on the other hand, replaced Jovetic with Palacio, utilizing the Argentinian once again, as a fresh defender on attack. The experienced forward pressured Roma’s CBs when needed, cut passing lanes in the middle of the field and tried to hold on to the ball for as much time as possible.

Ranocchia was also used(replacing D’Ambrosio/ Murillo was now a RB with the Italian as a CB next to Miranda), in order to defend against Roma crosses and corners.

The most disciplined and concentrated team won a game, that Roma could have probably taken at least a point of. Roberto Mancini asked Garcia some tactical questions that the Frenchman was unable to answer, after his plan A gave no results.