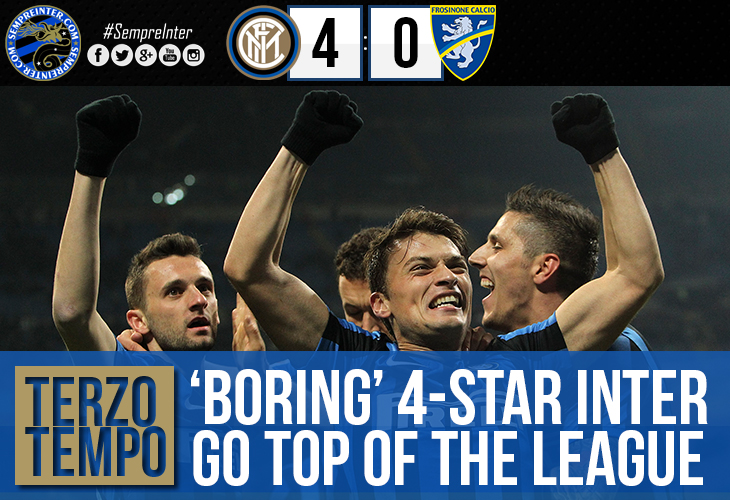 Roberto Mancini fielded a side that included, once again, the in form Samir Handanovic behind a defense consisting of Alex Telles, Jeison Murillo, Miranda and Nagatomo (from left to right). In front of them sat the double pivot of Kondogbia and Felipe Melo, Jonathan Biabiany provided the attacking width on the right with Ljajic on a much more free role on the right, moving between the lines and combining even with Biabiany on the other side. Icardi played as the lone striker with Jovetic behind him on a free role, searching for spaces to either receive or make a pass in a shape that resembled a 4-2-3-1 (4-4-2 and 4-4-1-1 also, depending on the situation and occasion).

Roberto Stellone on the other hand continued fielding his team in their 4-4-2/4-4-1-1. Leali started under the goal posts behind a four man defense of Crivello, Blanchard, Diakite and Rosi(from left to right). The second line of four consisted of Soddimo, Sammarco, Gori and Paganini with Castillo moving in front of them and behind the striker, Ciofani.

Frosinone’s defensive strategy was to force Inter on long balls, or to move the ball through the sides and not the centre of the field. When Inter passed through, though, and invaded their own half, they defended in two banks of 4, in a mostly man-oriented defense.

Man-oriented defenses can be effective when they are implemented against static offenses or when the defender’s quality is enough to counteract against the attackers’, but that was not the case in this match, against a very fluid duo of Jovetic and Ljajic and a striker like Icardi who although is not moving a lot during the build-up, is always trying to drag defenders with him in order to create space for his teammates when on the final third.
Another problem arose by the lack of defensive contribution by Castillo.

With the two banks of four getting dragged deep into their own penalty area and both Castillo and Ciofani waiting up front for a deep ball to counterattack, the was no Frosinone player in the space between to seize the rebound balls, which resulted in Inter recycling the possession easily.

In their effort to force Inter on long balls, the two forwards and the two wingers move up the field to create something like a 4v4 against the nerazzurri defense, with the two CMs following this movement from behind closing the space in the centre of the field and forcing Inter to either attempt a long ball or build-up the game from the sides(something which they were content to do).

Problems started though, with the defense not following with the same movements from behind and deciding to stay deeper, thus a huge space between midfielders and defenders was created. Inter quickly saw that and were happy to play a long ball in the direction of the 4v4 that was created, a space where they had qualitative superiority. (see image below, Biabiany is in the bottom-right and cannot be seen).

Frosinone were not very effective with their pressing traps either (in the very few occasions they occurred).

On the image below you can see that Frosinone have driven Kondogbia into the centre of the field where they can close on him and steal the ball. However, Castillo’s(red) lack of effort and Soddimo’s lack of timing and speed on the pressing run, wasted this opportunity.

By having each player mark an opponent the team from Lazio managed quite successfully to force Inter long on some occasions.

Due to the opponents lack of quality, the nerazzurri were not afraid play fluidly and try to make up the numbers on midfield in order to retain and move the ball better.

Stevan Jovetic had the freedom to move anywhere it seemed necessary, and especially moved laterally in order to combine on the sides with the FBs and the wingers, creating triangles. When not on the sides, he searched for tight space, quick combinations with Icardi and Ljajic.

The Serbian had an excellent game overall, making moves from left to the centre in order to shoot or in order to create combinations like Jovetic. He had 2 assists and could have had 2 more, but seemed occupied with the thought that he had to score and did not pass to Biabiany on one occasion and Icardi on the other who were in great positions to score.

Both Jovetic and Ljajic moved between the opponent’s lines, also.

On both pictures below you can see Inter having 4 men on the central area of the field, it was a positioning that either created numerical superiority, giving Inter the chance to circulate the ball easier(first image) or when Frosinone tried to make up the numbers creating space on the sides for Nagatomo and Telles to exploit (In the second image you can see Ljajic dragging inside the opponent’s right winger and Biabiany the LB creating a huge space to be exploited on Frosinone’s left side).

Although this match was against one of worst teams in the league, the Inter forwards ( Jovetic, Icardi and even Perisic) showcased how good they can be with their of the ball movements, dragging defenders around when not with the ball and creating spaces to be exploited by their teammates.

Above, you can clearly see(in one of the many occasions) Perisic taking the opponent left back with him creating a space for Ljajic to pass the ball into for Brozovic to score.

Mancini surprises by using Murillo as a full back

When on the 60th minute Ranocchia replaced Yuto Nagatomo, it seemed like Inter were going to change to a 3 man defense and probably to a 3-4-1-2 (like in situations in the past, for example against Hellas Verona).

Mancini though, decided to place Murillo on the right side of defense and Ranocchia as a RCB. Although the Colombian didn’t have the time to showcase a lot in this position, especially on offense, as the opponent was getting less and less compact with their shape and their returns were much slower creating a match in a state of transition for long periods, he did great defensively by getting to the ball first in passes directed in space by Frosinone and scoring a goal after stealing the ball, initiating the counterattack and receiving the final pass.

Finally, it was another unimpressive game from Kondogbia who misplaced some easy passes. However, the Frenchman should not get treated harshly again for this game, especially for occasions when he lost the ball under pressure.
With Inter playing with two defensive midfielders close together, occupying the same space, and no help from the front 4, Kondogbia was destined to lose the ball when 1 and two opponents were pressing him harshly and hard and he had no one to pass to.

On the image above you can see the Frenchman getting pressed by one Frosinone player and two other approaching. No Inter player has moved to get closer to him and create a passing option. Felipe Melo seems like an option but he is in a position where either if he receives the ball he will quickly get pressed by the three opponents and lose possession. He could have made his teammate’s life much easier if he had moved, for example, in the yellow space, showing a passing lane between the opponents.

Inter faced one of the worst teams in the league and finally won big. The offensive fluidity is something that opponents will have to keep in mind just as the inability keep hold of the ball in many pressing situations.