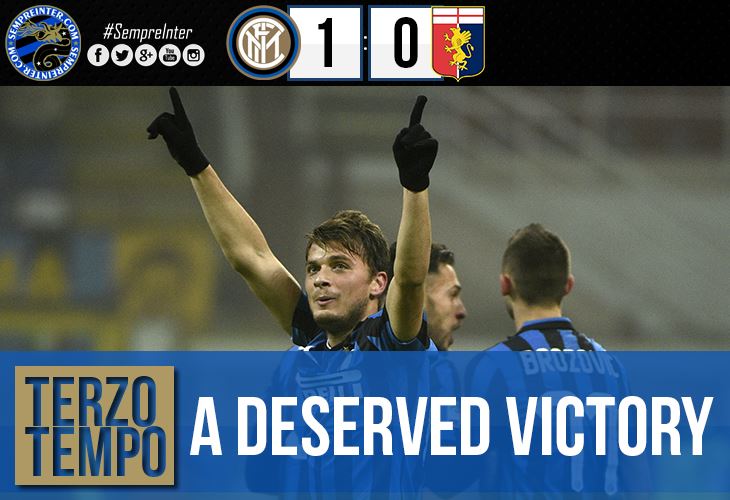 Roberto Mancini fielded a team that included Samir Handanovic under the posts with a defensive line of four that included Alex Telles, Murillo, Miranda and Danilo D’Ambrosio( from left to right) protecting him. Gary Medel and Felipe Melo occupied the centre of the field. Biabiany was on the right wing with Ljajic on a more free role on the left, flanking the fluid attacking duo of Jovetic and Palacio.

Ex-Inter coach Gian Piero Gasperini chose his favourite 3-4-3. Perin was on goal with Izzo, Burdisso and Ansaldi in front of him (from right to left). Costa and Rincon were the two central midfielders, Laxalt and Figueiras the two wing backs. The attacking trident consisted of Gakpe as a CF, Perotti playing on the right wing and Lazovic on the left.

Gasperini, as in almost every Genoa match, decided to man-mark certain players of the opponent, although that in this situation it was the 2 opposing FBs, the wingers and the CMs also.

In the above image you can see the man-marking pairs created during the game.

All of the above pairs left a 3 v 2 for the Genoese defense against Inter’s two forwards and the striker Gakpe with the responsibility to press the CDs and cut their passing lanes to Medel and Melo in order to force the ball on the wings.

Although the man-marking was not utilized in the entirety of the pitch, with the rossoblu players passing the marking responsibilities from one to the other, in certain situations, some fast combinations and movements by Inter players dragged opponents away from their natural positions (without them passing the marking) creating spaces for their teammates to exploit.

The fact that Gasperini’s players had to be in close proximity with their man-marking opponent in order to press when the ball approached did not help the Genoa defensive structure either.

Above you can see a situation where Gakpe has already forced Miranda to move the ball to the wing and Genoa pressing near the sideline. You can also see how the man-marking pairs were formed on the pitch.

This is an example of how this defensive strategy, can be easily beaten if not executed correctly.

Seconds before this screenshot was taken Biabiany and D’Ambrosio have stolen the ball from Genoa with Melo and Medel very close, dragging with them Rincon and Costa. This 4v4 that was created on the flank meant that Biabiany had to only dribble a player in order to reach the huge evacuated space in front of the rossoblu defense.

During the first half Genoa’s pressing to force the ball wide and the man-marking on the centre of the field made life difficult for the nerazzurri, who either had to play direct and long to the two forwards, who then had to combine against 3 defenders, or try to reach the space between midfield and defensive lines of Genoa through the wings.

The second way mentioned seemed easier and was more successful too. Melo and Medel dragged Rincon and Costa close to the halfway line creating a big space between the them and the Genoa defenders, then the ball was passed to D’Ambrosio who combined quickly with Biabiany and made an underlapping movement through that space, taking advantage also of Perotti’s sluggish defending.

Of course, those two movements mentioned were not enough to break down the opponent and Mancini had to change many things, on half time, in order to wing. And he did.

Ljajic started make more movements towards the centre of the field, either on the offensive third or during build up sometimes in order to help with possession. He also dragged Figueiras away from the defensive line in order to isolate Jovetic against Izzo in a 1v1 near the sideline.

Biabiany, who in the first half moved mostly laterally, also started to move between the lines.

Above you can see Brozovic (who replaced the injured Melo) and Medel creating space centrally by dragging Costa and Gakpe (with Rincon near the CBs). The ball is then passed to Biabiany in front of the defense.

At 10:39 of the second half, we even saw both Biabiany and Ljajic moving centrally creating a diamond shape with Medel and Brozovic and creating space on the wings for the FBs to move up. The fact that their diamond was formed with small distances between them (and a superiority in numbers) could have helped them with the keeping of possession also if used more.

Playing against a team that primarily wanted to counterattack, didn’t allow Inter to form a 4-4-2 on defense for as long as usual but quick returns, especially from the impressive Biabiany and Medel meant that the nerazzuri were not caught off guard on transition either.

When Genoa tried to build their game from the back Inter tried to force the ball wide where it was easier to be won back.

Lets see how that happened:

Above, you can see Jovetic and Palacio positioned very close to the central CB, Burdisso, with Ljajic in close proximity of Izzo. This positioning “invited” Perin to pass the ball to his left to Ansaldi, if he didn’t want to kick it long, where the pressing trap was initiated.

You can notice that in contrast with Genoa’s man oriented pressing, Inter have players who occupy space (Medel) and Ljajic at the top of the image who is close to three players if the pressing breaks down and Genoa change the side of the game.

At the 75th minute Gasperini decided to bring Pandev in, replacing Figueiras turning his team’s shape into a mixture of 4-2-4 and 4-3-3 depending on Perotti’s movement.

They also tried tried to move between the laterally but not horizontally compact shape of Inter creating situational 4v4 against the opponent’s defensive line, just like below, but without any result at the end.

Conclusion
Inter played again more fluidly than when Icardi is on the pitch,and they managed to pull of some very beautiful combinations like this one:

Mancini saw the first half problems and reacted on the break and Inter, even if due to a foul, are back on top.