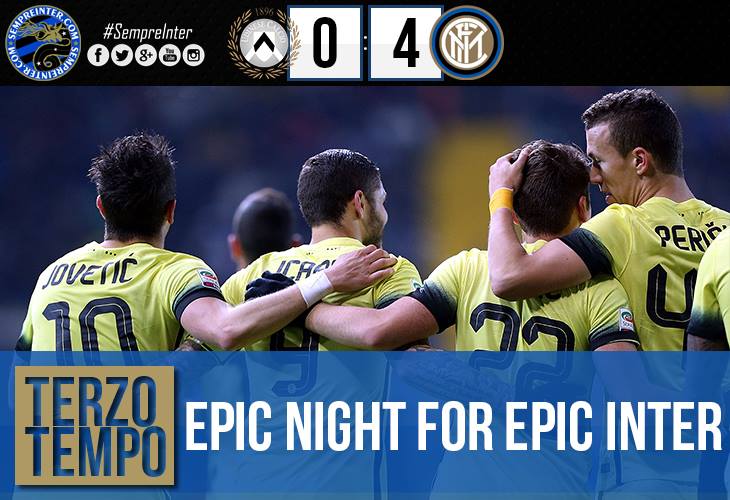 Roberto Mancini selected, as always, Samir Handanovic under the posts behind a defense consisting of Alex Telles, Jeison Murillo, Miranda and the La Masia graduate and finally debutant with the Inter shirt, Martin Montoya. Freddy Guarin and Felipe Melo were the two CMs/DMs, behind a front four that included Perisic and Ljajic on the wing and Jovetic playing primarily centrally and behind Icardi.

On the other bench, Stefano Colantuono chose a three CB defense to protect Karnezis, that included Wague, Domizzi and Piris. Widmer and Edenilson were the WBs. Iturra, Lodi and Fernandes played centrally behind the attacking duo of Antonio Di Natale and Thereau.

Mancini fielded a very offensive minded 11, with Jovetic, Perisic, Ljajic and Icardi starting together for the first time. The two wingers interchanged positions all the time, but Ljajic also had the freedom to roam centrally with or without the ball. Perisic was also moving more centrally in order to receive the ball in the offensive third next to Icardi, creating as a result an offensive shape without any width, not forcing the Udinese defense to be stretched and spaces to open. Joining the front four was always the FB that played at the side of the ball with the other one staying back, together with the CBs, in order to create a three man defense. In front of the defense Melo and Guarin created a double pivot almost all the time, offering solidity and insurance to the team and giving freedom to the front four to move and create.

Let’s check out Jovetic’s, Perisic’s and Ljajic’s Heatmaps (This view visualises the on-ball actions of selected player(s) or team(s) ) :

*these three maps are courtesy of Opta and Squawka

You can obviously see through these heatmaps above the freedom that was given to those three , moving almost everywhere to the offensive third and not being restricted to just the wings or the centre

In the above picture you can see the lack of, the aforementioned, width because of both Ljajic and Perisic moving inside and the lack of presence on opposite wing by the other side’s FB (who as mentioned, stayed back).

Inter also tried to create a 3v3 against the Udinese CBs with Icardi, Jovetic and Perisic , in situations where the ball was destined for a cross.

Internazionale was once again very comfortable being in their own half and defending especially against a very disconnected (primarily in the first half) Udinese team.

Mancini chose once more to keep his 4-man defense close together in order not to allow spaces to be created between them, that could have been exploited by a very dangerous opposition attacking duo . As a result, the two wingers, Ljajic and Perisic, were defending the width becoming the fifth or sixth defender next to the FBs and moving in relation to the opposition WBs who tried to stretch the field. Melo and Guarin were protecting the defense centrally(see image below). Icardi and Jovetic had to cut passing lanes to Lodi during Udinese’s build-up.

Colantuono’s team utilized a man-marking defense, which proved inefficient although they did not concede a goal because of that reason.

He chose to have 1 more defender than the opposition had in attackers, man-marking inside or close to the offensive third and many times inside their own half in general. The two wingbacks marked Perisic and Ljajic with Wague and Piris on Icardi and Jovetic leaving usually Domizzi to act as the free man behind them.

The above screenshot is taken after a Samir Handanovic Goal- kick. You can clearly see the match-ups and how the defensive shape of Udinese was distorted by some simple movements to the inside by the wingers that created plenty of space for the FBs, and Montoya in this case, to run into. (the purple and yellow circles show who marked who just before the Goal-kick)

Udinese’s choice not to have their midfielders mark the space on Inter’s short build-ups but to mark Melo and Guarin centrally but also the FB closer to the ball, created problems, as with the defense sitting deep trying to create a 5v4 against the Inter attackers a huge space in the middle of the field was created for any forward to drop into and receive the ball.

With Guarin, Montoya and Melo having the three midfielders close to them, a huge space is created behind them and can be utilized if Guarin turns and passes the ball into space. (Although the screenshot is not a good indication of the aforementioned, as the camera turned an unoccupied area with a length of around 30-35 meters can be seen).

Ljajic’s overloads to the side where Perisic was also created problems. With the opponent wingback not following him, one of the Udinese MCs move towards him, leaving Guarin with the chance to receive the ball in a huge unoccupied space.

Of course, Udinese, couldn’t have used such a defensive system without facing the usual problem of the unorganized shape during the transitions. (This is because, when on defense the players’ movement is based on the opponents and the fact that they can end up in different areas than where they started makes the totally unorganized when they win the ball and are ready to attack)

A nice example can be seen below :

You can clearly see Udinese’s destryed shape just after they have won the ball and lost it immediately.

Note: Notice how Icardi uses his body in order now to allow Domizzi to take a step and make use of the offside trap, leaving his teammate onside and in front of a huge chance.

Below you can also see how easy it was at times for Inter to break this man-marking scheme.

With the second half starting at 0-2, Udinese left the locker room with a much more attacking mentality. Inter on the other side was content to sit back if needed.

Thereau was now much more free to drop off and receive the ball, although the huge spaces between the three midfielders remained and forced Udinese to play simple and direct, lacking the shape that would have enabled them to keep circulating the ball.

Ten minutes after the start of the second half, Colantuono decided to substitute the incompetent and sloppy on defense but also mediocre in attack Fernandes with Marquinhos who started to move between Inter’s lines of defense and midfield.

There movements together with the ones from Thereau, forced Mancini to change shape by introducing Brozovic ( Jovetic Out).

Inter now played with a 4-1-4-1 on defense that because of the presence of the DM between the lines, offered more protection.

Colantuono responded again, bringing in Perica and then Aguirre, removing Iturra and pushing Edenilson upfront to play as a right winger.

However , without any result, as his team made their third huge mistake giving Inter a 0-3 lead.

With Udinese having 3 forwards, Mancini chose to close the game with a 5 man defense that was created after Juan Jesus replaced Ljajic ( Inter played something like a lopsided 5-3-2, with one striker and one winger upfront)
These are the shapes that the teams ended up the game with :

Udinese handed 3 easy goals to an Inter team that would have won with or without them. Their defensive and structural inefficiencies were too much to be covered up by an attacking and fast paced game at many periods during the second half, especially against an incredible, once again, Miranda and Handanovic. Martin Montoya was very positive in his official debut and Inter got 3 hugely important points.