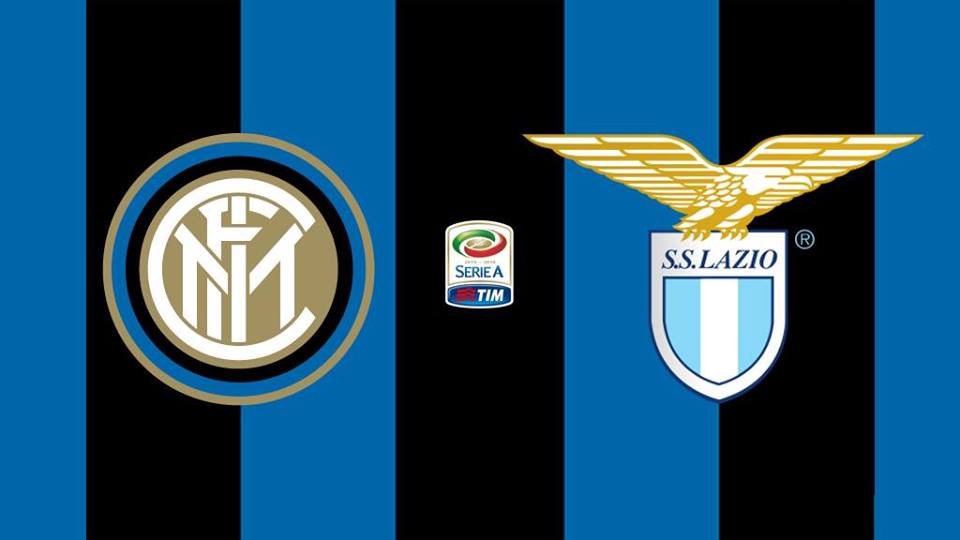 Roberto Mancini surprised many by not including the two most in-form players in the squad, Marcelo Brozovic and Adem Ljajic but choosing two more “classic” wingers in Perisic and Biabiany ( who can stretch the field better). Under the posts, Samir Handanovic was present once again, behind a defense consisting of Alex Telles, Murillo, Miranda and Montoya (from left to right). Medel and Felipe Melo created the double pivot that was protecting the defense with Stevan Jovetic and Mauro Icardi up front, in a shape resembling a 4-4-2 and sometimes on offense a 4-2-3-1.

The FBs positioned themselves according to the Lazio wingers in order not to give any time and space to Anderson and Candreva. This positioning together with the fact that the two CBs stayed centrally and were trying to put Matri between them, created big spaces between the CBs and FBs for Parolo and Savic to attack from deep. Spaces that were protected by Melo and Medel.(see below)

On the other side, Stefano Pioli fielded a side with Berisha between the posts. In front of him there was a 4-man defense of Radu, Hoedt, Mauricio and Konko(from left to right), Lucas Biglia was protecting the defense with Parolo and Savic in front of him. Felipe Anderson and Candreva were the two wingers flanking the ex-Milan and Juventus player Matri.

Whatever Roberto Mancini’s plans were for this game, they were quickly thrown out of the window as Lazio was 0-1 up already from the 5th minute.

It was a totally avoidable goal from Inter’s side. Let’s take a look at it :

As you can see, there is an unnecessary 9v5 for Inter inside the penalty area, 10v5 if someone considers the fact that Biabiany’s positioning is too far from the 3 Laziali outside the box in order to reach them with a small sprint. Although it was absolutely necessary for someone else to help the Frenchman at the edge of the area (for example there are three players protecting the front post without reason), he could have probably positioned himself on the line of the box, nearer to Candreva, in order to make the execution for the corner kick taker more difficult and probably force him to cross.

With the score now at 0-1 Lazio had the chance to sit back and protect the lead, hiding their problems as a team at the same time.

During the most this season, Lazio has been a team with huge spaces appearing when in transition from offense to defense and two CBs that are easily drawn out of their line(with fake runs from the opposition) , making absolutely critical the presence of a good DM in front of them.

By sitting back, attacking with small numbers of players and not holding on the ball for long, it was impossible for Inter to take advantage of these flows.

After they took the lead, Lazio seemed content to sit back and let Inter attack.

During Inter’s build-up, the two CMs, Savic and Parolo were marking Melo and Medel, with the two wingers tucked inside, leaving space for the Inter FBs to receive the ball and then press them. Matri was positioned in front of and between the two CMs, cutting any possible passing lanes to the centre of the field. Biglia was protecting the space between the midfield and defensive lines.

As it can be seen from above, this shape was protecting the central area of the field forcing Inter to pass the ball and try to create from the wings, a much more difficult area to have the ball, as the sideline is acting as another defender and you can be very easily pressed.

When it came to Biabiany and Jovetic, two players who could have caused a lot of problems to the Lazio defense, the first with his speed and the second with his creativity and technique, the biancocelesti were always pressing them from behind when they tried to receive the ball with the intent of not letting them turn and face the goal.

As we mentioned above, Lazio tried to force Inter on the wings where they were pressed more easily.

This is not particularly a huge problem for an offense as long as the ball is passed back to the central area on the offensive third and they do not end up crossing the ball all the time.

Inter’s problem, in that sense was that there was no one to receive the ball at the space where there is usually a number ten. With Medel and Melo staying back and protecting the defense and Jovetic taking mostly positions near Icardi, creating this way an attacking duo, there was a huge space with no other than Lazio midfielders at the centre of the pitch.

On both screenshots above, you can see a huge unoccupied space at the centre of field which leaves no choice to Biabiany but to either cross or try to dribble anyone in front of him without a lot of chances for success.

Inter once again utilized pressing schemes that were not necessarily targeted towards stealing the ball but towards forcing the opposition to move to the wings or play long balls.

Most of the times these tries were successful, but there were also occasions were Jovetic’s poor defensive positioning forced Icardi to do two defensive jobs.

The nerazzurro captain is always the one who initiated the pressing, sprinting towards the opposition centre backs and forcing them to move the ball to the wings where the pressing towards the sideline continued. If the pressing was working correctly Lazio would not have had the choice of changing the game through the centre, but Jovetic’s passive defending and poor choices when it came to deciding which passing lanes to cut, left Biglia free to receive the ball totally capable of creating. This freedom that Biglia had, was forcing Icardi to return immediately and mark him after having sprinted towards the CBs, taking on his shoulders a defensive task that it wasn’t possible to succeed in.

The evident lack of a presence at the central area of the pitch, was seen by Mancini who gave the instruction to both Biabiany and Perisic to move more centrally in order to receive the ball and combine with Jovetic and Icardi now that a numerical superiority could have been created and taken advantage of at the centre of the field. (see below). These inside movements, together with the very horizontally compact Lazio shape, also left a lot of space on the wings for Montoya and Telles.

Seeing no actual improvement, the nerazzurro coach substituted Biabiany and Jovetic with Ljajic and Brozovic. Changing to a shape that now resembled a 4-3-3 on defense, with Ljajic free to roam around the field on attack.

Despite the fact that there was now a much more fluid shape on attack and much more presence where there was none before, there was also another big improvement, when it came to Inter’s build-up.

Brozovic’s presence was now creating a 3v2 against Parolo and Savic in front of Inter’s defense which meant that there was now an option to move the ball up and build centrally, instead of being forced to move the ball to the wings all the time.

After the equalizer, Stefano Pioli, seeing that the movements of Ljajic, Brozovic or even Perisic towards the centre created many problems to Lucas Biglia and the defense, he decided to change formation on defense and play with two flat lines of 4 with very small distances between them and Savic next to the striker. Their defensive mentality also changed after around the 70th minute pressing higher and with more intensity, causing problems a lot of problems to Inter’s build up play.

After the 74th minute the striker was now Djordjevic, who was much more active on pressing and was harassing that way, the Inter CBs from up front and the DMs from behind when they received the ball.

The match seemed like it was going to finish at a draw, but Melo’s incredibly sloppy challenge on Milinkovic-Savic gave a penalty to Lazio, who made the 1-2 with Candreva which was the final score.

Although this was not a great performance by Inter, some can say that the nerazzurri shot themselves on the foot, conceding a silly goal and allowing Lazio to play a much more suitable to them game that did not show their flaws. Mancini improved the situation on the second half, but that late penalty deprived him of any chance of winning. Finally, mental problems could also be seen during the game, with players reacting very slowly to passes being made to them, or making mistakes on very easy passes and controls of the ball.

For questions about tactics, Inter or to express your opinion about the game, you can follow me on Twitter.