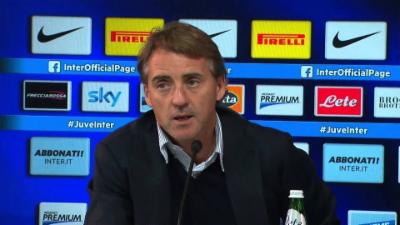 Inter returns from Bergamo with one point, thanks to a super performance by Samir Handanovic which Roberto Mancini also praise after the 1-1 game against Atalanta:

“The goalkeeper is there to save and Handanovic had two or three situations where he was brilliant. I’m not satisfied” said the coach to Mediaset Premium and continued:

“Someone need to do more because you need to win these matches. It was a tough game but we gave away the first goal as usual. After the drawing goalie were a bit uncovered and we allowed to much”.

“Jovetic? I don’t want to talk about single players. We have good players up front and they have to do more, they need to score goals, the team has qualities to reamin at the top. However it wasn’t an easy game. after the own goal, we gained some courage and then we managed to find the equalizer. A couple of times we wanted to overdo in  situations and that’s something we need to improve, It’s enough to do the easy things to go forward”

About the position in the standing:

“We were up in front for at least 14 matches, and that shows that we have our values. We can’t continue to throw away points (Lazio, Sassuolo) We need to remain calm because we can return to the top. Our target remain the same. If we go back and not hand out goals, I think that we can stay at the top during a very long time. We aren’t a team that scores many goals and that’s why I say that our strikers needs to start to score more often. Maybe we’ll do eight or nine other 1-0 matches but that won’t be easy. Man of the match? Samir, he made three decisive saves during situations where we were unbalanced and pressing for a goal”.