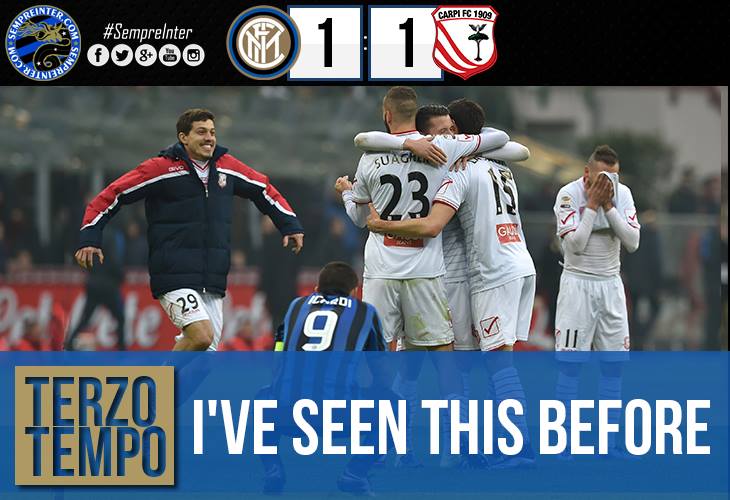 Roberto Mancini chose a team that included Samir Handanovic under the posts behind the CB duo of Juan Jesus and Jeison Murillo, who played for the first time together, at central defense, this year. They were flanked by Alex Telles and Montoya. In front of the defense, Felipe Melo and Brozovic created a double pivot. Ljajic and Perisic once again interchanged positions for the whole game, with the Serbian, however, moving a lot centrally too. Up front Mauro Icardi was paired together with the experienced Rodrigo Palacio.

On the other bench, Fabrizio Castori, started this game with his favourite 3-5-2/5-3-2. Belec was the GK, behind the three CBs, Zaccardo, Romagnoli and Suagher with Pasciuti and Letizia being the wingbacks. Bianco, Crimi and Martinho were the three CMs. Mbakogu and Mancosu were the striker duo.

Carpi did not present anything new to Inter at this match, playing their usual game.

This includes a 5-3-2 on defense (as can it be seen on the image below), with no high pressure. Instead, the forward pair, stayed close together and centrally, cutting passing lanes at the middle of the pitch, leading this way, the Nerazzurri to pass the ball wide where their FBs were pressured by either Crimi or Martinho and their wingers by Carpi’s wingbacks, Pasciuti and Letizia.

As it can be seen above, there is a huge space between the lines of defense and midfield. This was the reason that quickly after the match started, Ljajic begun moving centrally more and more, in order to take advantage of that space.

The midfield three’s movements on defense were also problematic as, by moving in unison towards the ball and no player in front of them to pressure the Inter player that recycled the ball from deep (just as in the first round match with Matos ), they left a big space on the other side of the ball, that started from the centre all the way to wing, for Inter to take advantage of.

On offense, Carpi once again played on the counter-attack, with only 3 to 5 players joining the attack most of the times.

The wingback on the side of the ball was moving high up, with the other one, staying back (many times), creating a 4-man defensive line.

Mbakogu and Mancosu, tried to take advantage of the spaces that Telles and Montoya, with their high positioning on offense left, and expose the CB duo on the counter.

For the few times in the first half that Carpi managed to keep the ball and attack without being in transition, Inter defended in 4-4-2, with the defensive line playing very tight together and the Inter wingers moving in relation to the Carpi wingbacks.

On attack, the plan wasn’t that complicated for Mancini.

Telles and Montoya gave the offensive width playing high up the pitch simultaneously, with Perisic and Ljajic having the freedom to change sides and move centrally, to take advantage of the spaces between the lines (as mentioned previously).

With Perisic on the left and Ljajic centrally, there were many times that Montoya had the whole right wing free to move into (as it can be seen below).

Although the first half ended 1-0, after a Palacio goal on the 39th minute, Roberto Mancini wasn’t content with what he saw and especially with the fact that, the high positioning of his FBs left a lot of space behind them for Carpi to take advantage of, leaving the Milanese vulnerable on the counterattack.

So, in order to solve that, he brought in Miranda with the start of the second half, replacing Alex Telles.

Inter now played with a 3-5-2, with Perisic and Montoya as their wingbacks, free to move high up the pitch with the extra protection of one more defender.

The midfield also changed, with Ljajic moving lower, when his team tried to build their game from the back in order to help them with ball circulation.

After around the 60 minute mark, though, Inter started to lack concentration on offense and defense, and the movement on the attacking third was much worse than the first half.

That was why Nagatomo was brought in.

With the Japanese now on the pitch, Mancini could switch back to 4 man defense without worrying so much about the defensive phase( due to Nagatomo being more disciplined defensively and with faster returns) and a 4-4-2.

With this new 4-4-2, now, Inter seemed focused on taking advantage of the spaces created between the Carpi CBs and wingbacks.

As you can see on the screenshot above, both Palacio and Icardi now stay centrally in order to closer to them the 3 Carpi CBs, with Ljajic and Perisic touching the touchline, dragging with them the wingbacks and creating a space behind them for Nagatomo or Juan Jesus to take advantage of after a pass.

With no second goal scored however, the Nerazzurri conceded on the counterattack on stoppage time. It was a goal, they had no answer to.

But which were really the things that Inter did wrong in order to finish the match with such a disappointing result ?

Lack of or wrong movements

Lack of movement is not something for this year’s Inter. Situations when the midfielders do not move enough in order to create passing lanes for their CBs arise almost in every game…

In the above screenshot, you can see what actually did not happen. Telles never made that movement towards Juan Jesus in order to then pass to the yellow space that Brozovic never made the movement to occupy. The result? Just one opponent presses the team and Inter lose possession after a long ball.

Movement in the offensive third, is also one the biggest problems for this team and the main reason this game never ended with an Inter win.

Icardi in this screenshot drags one of the CBs with him creating a space behind him in which he passes, but Ljajic never starts the run towards that space and the direction of the ball.

Below, we go the 19th minute, Inter is on the counterattack, Perisic has the ball on the wing with Icardi next to him and Palacio at the other side of the penalty area.

Perisic then manages to make a good lateral pass, but he sees Palacio attacking the area just in front the second post , with a keeper and a CB in front of him ready to deal with that ball, and Icardi waiting at the penalty spot.

A much easier and logical solution, would have been, Icardi attacking the front post in which he was closer to in the first place and Palacio making a run towards that penalty spot for a possible cut back or rebound.

Bad decision making was evident on the attack too.

As it can be seen above, both Ljajic and Icardi attack the same space in front of the keeper instead of just one doing that and his teammate running towards the second post where the ball actually went to.

Brozovic’s inability to protect the defense

Playing with two CMs protecting the defense with one helping on attack and the other staying in front of the CBs while on offense, proved to be a risk too for Inter, as when Melo stepped up to combine with his teammates on the attack, Brozovic proved unable to defend the space in front of them correctly.

Above, Brozovic instead of cutting the central passing lane to the player with the ball, not giving him the opportunity to pass to the Carpi player in front or the nerazzuri CBs, he runs towards him unnecessarily (since Perisic is already in close proximity), allowing him to pass centrally and initiate a dangerous situation for Handanovic.

This problem though, was solved as after a while, Felipe Melo became responsible for the protection of that area, giving up some of his attacking duties.

The Argentinian’s inability to play as a target man against CBs that pressured him from behind, meant that we saw a lot of misplaced and bas passes from him, affecting his teams attacking play.

He was also unable sometimes to realize that he was not followed by an opponent, passing as a result the ball back to his teammates instead of controlling it and turning, showing bad special awareness.

Inter proved once again unable to create and finish and left two points behind that probably are the gravestone to their Scudetto chances. Work towards all the points mentioned above needs to improve and increase in order for them to return to form.