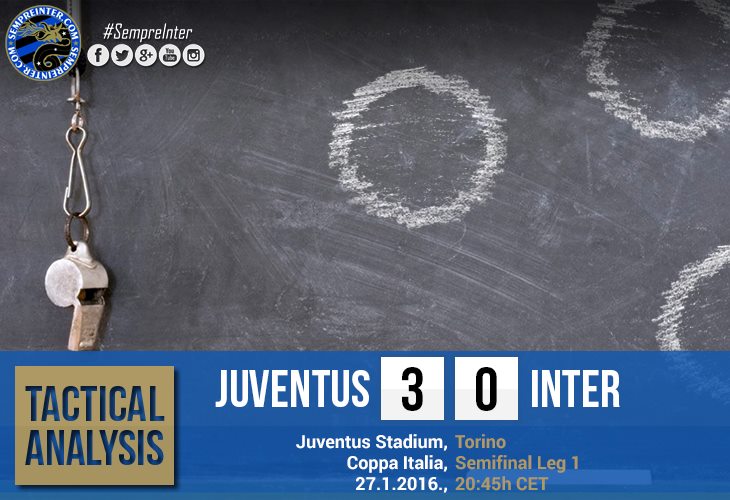 Roberto Mancini selected a side that included Samir Handanovic under the posts, behind a defense consisting of Nagatomo, Murillo, Miranda and D’Ambrosio. Felipe Melo was protecting the defense as a DM, with Gary Medel and Kondogbia playing some meters in front of him. Biabiany was occupying the right side of the pitch, playing as a winger with Ljajic, who as always was free to move where needed, on the left. Up front Jovetic started as the sole striker.

Max Allegri on the other side, brought on the field a team in a 3-5-2/5-3-2 formation. Neto was the goalkeeper and has Caceres, Bonucci and Chiellini protecting him. Claudio Marchisio played as the regista with Asamoah and Paul Pogba in front of him. The whole left wing was occupied by Evra, while on the other side Cuadradro present. On attack Mandzukic and Alvaro Morata created the attacking duo.

The bianconeri proved once again how much of a well organized team they are on the pitch. During the whole match, they managed to keep the spaces between them tight and their lines very close together, giving minimum chance to a very bad, offensively, Inter to score.

Above, an example of how well organized Juventus was, with their players leaving very small distances between them.

On defense, they were also content to sit back and wait for an Inter loss of possession to counterattack, pressing only when the ball was near the wings, but not always with a lot of intensity.

When the ball was at Inter’s half, the two forwards were positioned centrally in order to cut the central midfield passing lanes and force the nerazzurri to pass the ball to the wings.

With the ball at their half, they created a diamond shape, with Mandzukic at the top of it for most of the times, in front of the 5 man defense (just as in the screenshot below), closing every passing opportunity for their opponents to pass and find players centrally and through the lines.

The nerazzurri’s 4-3-3 shape on the attack, became something like a 4-4-2 when the ball was centrally, with Medel, as the most energetic of the three midfielders playing next to Jovetic and being ready to press, either the closest Juventus CB or Marchisio.(see below)

Jovetic was also responsible for cutting the passing lanes to Marchisio, who can create a lot of problems with his passes positioned in front of the defense.

When the ball moved on the wings, though, Inter was creating a 6-man defensive line, with Biabiany moving next to D’Ambrosio and Felipe Melo next to or between the CBs, in order not to let spaces from getting created between them, that penetrative runs from the Juve players would have taken advantage of.

With 6 players, though creating a defensive line and 2( Ljajic and Jovetic), waiting slightly up front for the initiation of a new attack, Medel and Kondogbia had to protect a big area in front of the defense.

Of course as you can see from the above screenshot, problems were created as Medel was not positioned correctly to stop a pass to Morata, moving instead towards Pogba who had already near him another Inter player, D’Ambrosio. (The red triangle indicates where he was supposed to be positioned if he wanted to cut the passing lane to the Spaniard and the red arrow, where he had to be if he wanted to press)

Having, however, a defensive four that were moving in relation to the ball and in unison with very small spaces between them, with a winger giving the defensive width, meant that in situations when Biabiany was not able to return fast enough on defense, big spaces arose next to the defensive line for runs by the Juventini to run into.

Inter’s problems with their pressing, of course, are not fresh news, but against a very capable team like Juventus, all those inefficiencies were much more evident this time.

Let’s look at some of those problems:

Jovetic’s inability to be the man leading the pressing.

The Montenegrin’s passive defending and lack of work rate have been evident this season, but mistakes like the one below, although they may seem small may make the difference in the game. Furthermore, it is something very easy to understand and execute.

With Inter high up the pitch, trying to press, Jovetic turns left to his pressing run far earlier than he should have, giving time and space to Neto, to find the free defender on the other side of the pitch. He should have instead turned where the red line is, forcing Neto to a long ball, since his other close options were occupied.

Failure to destroy the build-up by pressuring

Positioning their selves high up the pitch in order to force a long Goal Kick can be easily achieved with less players than the opposition’s since you can always occupy the spaces between 2 or even 3 players and make any pass risky.

What Inter did though was to either position too high or press with even 5 or 6 players high up the pitch.
This tactic was of course too risky, since the times it failed to produce a result Juventus was able to take advantage of a huge space in the middle of the field.

The above screenshot was taken, after Inter although positioned to stop or prevent a short goal kick, allowed it. The result was a huge free space in front of the defense that left the CB duo in a very vulnerable position. The only man protecting them was Melo but he was dragged by the run of Pogba.

But even if Juventus kicked the ball long they still could keep hold of the ball.

For example, in the above situation six (3 midfielders, 3 attackers) Inter players have moved up to press six or seven opposition players, leaving a huge space in front of the defensive line, and given their much slower return back to defense, a big opportunity from Juventus to take the second ball after the header and attack the defense, arose.

Lack of cover when pressing

Another thing that proved Inter are far from becoming a well-oiled pressing team, was the lack of cover behind the player that pressed.

In this first image for example, after Medel starts his run to press Chiellini, Felipe Melo and Kondogbia stay centrally in stead of moving towards the ball and close the option of passing to Asamoah. The result was him taking the ball centrally, after Chiellini had first passed to Cuadrado.

In this second image, Inter are playing with ten players, after Murillo’s red card, which naturally creates problems when you press. The fact, however, that Asamoah is uncovered has nothing to do with it. As you can see neither Miranda nor Medel or Nagatomo are near him, giving Chiellini a very easy passing option, which led to the third goal.

With Miranda now closing on him, after nobody did before he received the ball, and Morata dragging, with a small fake run, Juan Jesus out of position (not the Brazilians fault, since not following the Spaniard would have meant another passing option for Juventus), Dybala had to just run in the free space between JJ and D’Ambrosio to score (an area where a DM might have stood if Inter played with 11 players still).

Problems on the attack

Inter, however, did not present their problematic side only on defense, but on offense too.

With Jovetic moving laterally and horizontally to receive the ball and create triangles with his teammates, on the wings, and no midfielders moving or making runs towards the direction of Neto, Inter left many times the Juventus penalty area unoccupied, making their opponents life easy.

In the above situation, Jovetic, Biabiany and Ljajic have formed a triangle at the right wing, but as it can be seen there is no player at the penalty area to wait for a cross or to just make a run that will drag a defender and create spaces for the three players on the wing.

Again, Jovetic moves closer to Biabiany, and since no midfielder makes a run towards the attack, Inter stay headless, with no one to run behind the defense or act as a target man and move the ball upwards.

A below average performance, against one of the strongest teams in Europe could not have brought a result different than the loss for Inter. Badly executed and unorganized pressing that lead to the defense being unprotected and vulnerable resulted in a penalty, a red card later on and three goals conceded. On offense the lack of an attacking presence combined with midfielders that did.