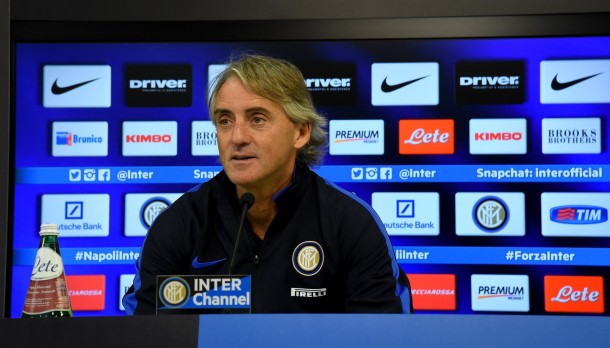 After the disappointing draw against Hellas Verona, Roberto Mancini arrived to the post match press conference in the press room at the Stadio Marc’Antonio Bentegodi. FcInternews.it were present and recount the Inter coaches words.

FcIN – Today some 45 crosses were attempted, but if some were delivered well some were poor. How do you explain this? Given the match against Fiorentina what is Roberto Mancini’s sentiment about finishing third?
“I have a good feeling, we threw away 2 points in today’s match but given how it went today the team did well and played overall well. However, it started bad given that the lads lacked balance.”

Is it possible to see the 4-2-3-1 wth Brozovic and Kondogbia from the start?
“They are young, need to give balance. They need time.”

Was playing Eder on the wing your decision?
“He has a type of characteristic that makes him suitable in a 4-3-3, maybe he needs to tighten his movement more.”

Did you expected such a difficult match?
“We knew that it would be difficult to play, but if we hadn’t fallen asleep on the set pieces we would have won. We had the chances, then again every match is difficult.”

What to you need to work on?
“We were sleeping, but up until Alex header in the derby we hadn’t conceded on set pieces. When they scored 4-5 players had their heads on their pillows, 2-3 were out of position. We will work harder, in this moment we haven’t worked a lot.”

Can the match against Fiorentina change anything?
“If we win we’re in third place, in a great position.”

Will you go to Rome on Monday?
“I always go.”