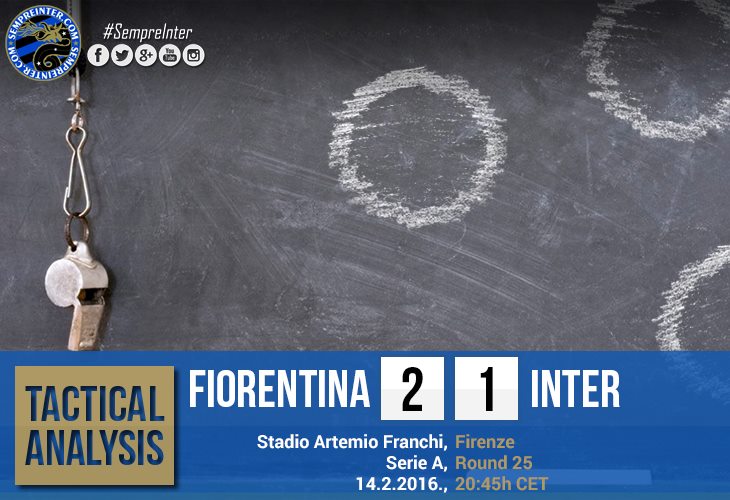 Roberto Mancini chose Samir Handanovic under the goal posts, behind a defensive line of four that consisted of Telles, Murillo, Miranda and Nagatomo. Gary Medel was protecting the defense with Brozovic and Kondogbia in slightly more attacking roles as CMs. Icardi was the sole striker, with Palacio and Eder on either side of him.

Inter decided to sit back, close the spaces and counter-attack on yet another big match against a top 5 team.

The three midfielders and the three forwards, were positioning themselves centrally, creating a compact block that was forcing Fiorentina to play primarily from the wings.

The opponent’s attacking formation against this very compact shape, meant that sometimes Brozovic or Kondogbia were helping the FBs on the wings, with Palacio and Eder filling the central spaces that the before mentioned players had evacuated.

On their defensive third of the pitch, Inter was organized in a very tight 4-5 shape, with the wingers helping the FBs to defend against Fiorentina’s width (especially Palacio).

Ex-Inter player Paulo Sousa chose the Romanian Tatarusanu as the GK. In front of him there were Roncaglia, Rodriguez, Astori and Alonso. Vecino and Borja Valero created the double pivot in front of defense. Tello was providing the attacking width on the right as a winger, while Bernardeschi and Ilicic played behind the only ST Kalinic.

When on defense, Fiorentina were organized in 4-4-1-1 shape, with Ilicic near the opposition DM in order to either press or create problems to Inter’s recycling of the ball.

When on offense on the other hand, Fiorentina utilized a shape that resembled a 3-4-2-1. With Bernardeschi moving to a central position behind Kalinic, Alonso was occupying the whole left wing with Tello providing the width on the right.

It was a shape that instantly created a lot of problems to Inter’s pressing.

Inter’s pressing has been, many times this season, with probably the most obvious example the match against Juventus, unorganized and executed without the proper concentration and thought. And although the problems were not that obvious when it came to it’s execution (for example players not covering behind players that pressed), many of them were still present.

As you can see on the above image, Fiorentina’s natural shape on offense, was constantly asking the question of who to press, the player on the wing or the player positioned behind Kalinic, on the Inter FBs.

This 2v1 for the Viola, made situations when an Inter FB decided to press one of them, very easy to bypass, as they could immediately find a free man.

For example, above, Nagatomo moves to press Alonso who immediately finds Bernardeschi free with a header.
The opponent’s players individual ability to bypass the pressing, also made thing much more difficult for the nerazzurri.

For instance, let’s take a look at one of those situations.

Astori moves his body to the left, like he is about to pass the ball to the wing, making Kondogbia to move two steps on that side, and leave enough time and space for Borja Valero (red bubble) to receive the ball from the Italian defender and break the pressing.

It is difficult to tell something, without knowing what was practiced during the weekend, about Icardi’s pressing during the match. Either Mancini’s order to him was to start the pressing every time the ball was returning back to the Fiorentina defense, or the Argentinian was not recognizing the right situations that would have allowed his team to press properly.

Either way, this led to Icardi sprinting towards the opposition defenders in order to press, while his team was either unorganized or too far behind in order to continue the pressing. That meant that he, also , lost a lot of energy that he could have used on offense.

As it can be seen above, Icardi initiates the pressing, with Palacio/ Eder very far behind him. That meant that the Viola player that received the ball next had enough time and space to break the pressing.

The Croatian, for yet another big match, was at fault on game changing situations.

On the first goal conceded by Inter, Borja Valero run from deep to break the offside and score with a header.
Depending on the coach, these dangerous runs from midfield are treated either by the CBs or by the CMs following them inside the penalty area.

However, whatever the instructions are in those situations, to the Inter players, Brozovic should have had recognized that there was a numerical superiority (3v2), for the opponent inside the penalty area, and Palacio and Medel behind him to cover him in case Vecino received the ball outside of the area, and follow Valero.

As you can see, Brozovic presses Astori with his body being too wide and does not close the passing lane to Borja Valero who receives the ball.

The Spaniard then passes to his compatriot Alonso, who finds Zarate free, as Brozovic did not mark him or close the passing lane (other than that Inter’s defense in this situation was very well organized), who then pass to Babacar who scored for the final 2-1.

Inter’s nightmare continues. Lack of movement on offense and pressing mistakes were once again present for the nerazzurri, who, however, could have probably avoided the loss, if those easily avoidable mistakes, had never occurred.