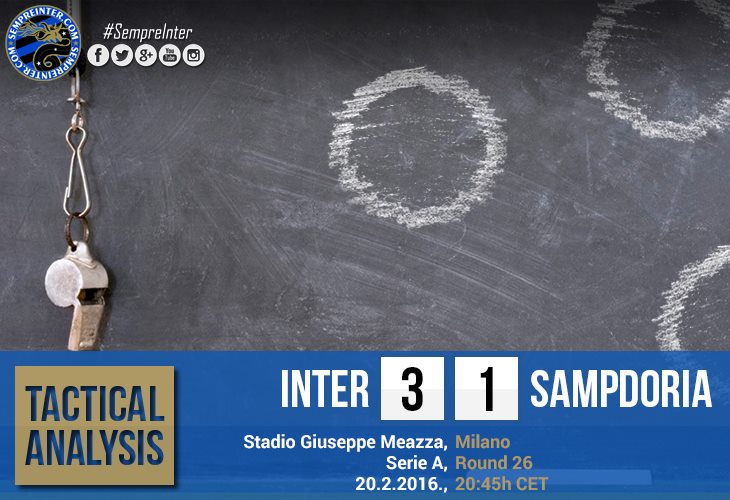 Inter started with Samir Handanovic under the goal posts, behind a defense that consisted of D’Ambrosio, Miranda, Murillo and Yuto Nagatomo. Brozovic and Felipe Melo were protecting the defense with Biabiany and Perisic being the wingers and creating the offensive width needed. Up front Mauro Icardi was paired with Eder.

Vincenzo Montella on the other bench, chose a side that fielded 5 ex-Inter players. Viviano was the goalkeeper with a three CB defense in front of him that included Ranocchia, Silvestre and Cassani. Fernando and Soriano created a double pivot in front of the defense with Correa and Alvarez also playing centrally but trying to take advantage of the spaces between Inter’s midfield and defensive line. Fabio Quagliarella was the striker in a team that had their wingbacks (Ivan and Dodo) providing attacking width.

Roberto Mancini’s team seemed content, during different periods of the game, to sit back, defend and wait for a counterattack, by taking advantage of Biabiany’s incredible speed for example (primarily in the first half), especially since they were playing against a team that had a numerical superiority of a 4vs2 in the middle of the field and keeping possession would have been, naturally, more difficult for them.

The nerazzurri defended in 4-1-4-1ish shape with one CM and one FW always cutting the passing options of Soriano and Fernando, when Sampdoria were building up from the back.

This happened in order to allow the other CM to cover the space between the midfielders and the defenders, a space in which two technical opposition players moved and were trying to receive the ball.

The importance of this tactical choice by Mancini is highlighted in the screenshot below.

With Eder and Icardi not covering the passing lanes to the two Sampdoria DMs, Felipe Melo and Brozovic move closer to them, leaving a big space between them in which Quagliarella moves to receive the ball, dragging Miranda far from his defensive line. The Italian forward manages to turn his body and pass to Alvarez who is now on a dangerous 3vs3 against Inter’s defense.

As the ball was progressing towards their defensive third, the Milanese formed a 5-3-2 with the winger on the side of the ball, adjusting his height on the pitch in relation to his side’s opponent wingback and thus creating a 5 man defense.

When it came to pressing, the nearest player to the ball pressed but only inside Inter’s half.

Build up problems were present once again for Inter, as they were many times during the game cut in half. The very big space between the two CMs/defense and the front four combined with lack of dropping movements from the wingers and forwards meant that many times the defenders were forced to kick the ball long and lose it as a result.

The Blucerchiati started the game by pressing high up the pitch, in order to force their opponents on long balls and regain possession.

After 10 minutes, Montella’s team decided to sit back and create in the centre of the field an organized shape that resembled a pentagon and forced Inter to the wings.

On offense, their 3-4-2-1 shape put their opponents under a lot of difficulties.

With Correa and Alvarez positioned between the lines and followed by either Nagatomo or D’Ambrosio, big spaces were created on the wings for Dodo and Ivan to take advantage of them, forcing Perisic and Biabiany to follow them.

You can see the two Argentinians between the lines inside the yellow circles, as well as the two wingbacks providing the attacking width, inside the red circles.

Sampdoria’s problematic positioning during defensive corner kicks, was something very evident since we saw the first Inter corner kick of the game.

As you can see from the screenshot below, three players occupy space inside the penalty area. Fernando is standing on the near post, Quagliarella at the edge of the “goal box” and Ivan ready to intercept any pass towards the area, with everyone else marking man to man.

This man to man marking meant that in case the Inter players moved towards the near post while the ball was directed towards the second Viviano had a clean area to block the ball.

However, if the ball was initially directed towards the first post, forcing Viviano to stay put, and then head it towards the second, an unoccupied area was there for Inter players to run into and score.

On the above picture, you can see exactly that, with Perisic making the run towards the second post.
It was this exact routine from which D’Ambrosio scored the first goal.

When it came to Inter defending set pieces, the interesting thing was their different approach compared to their opponents, as Roberto Mancini chose once again, zonal marking.

( notice the risky Perisic-Ranocchia pair that was often created, in which the Italian had a big advantage and almost caused trouble in two occasions)

Sampdoria decided to press more and higher up the pitch in the second half, starting their pressing every time the game was restarting from Handanovic’s feet or the ball was returning back to Inter’s defense.
Searching for a solution, Mancini decided to substitute Eder with Adem Ljajic and changed his team’s shape to very narrow 4-2-3-1.

This change of shape meant that Melo and Brozovic could stay closer to the defenders, not being forced to press Soriano or Fernando (which Ljajic did when necessary).

The narrowness of this 4-2-3-1 also meant that Sampdoria could now only play from the sides, a much less dangerous area of the pitch. The presence of the 2 DMs closer to the CBs, also left much less space between the lines for Alvarez and Correa to take advantage of.

Seeing that, Montella decided to replace Ivan with Muriel.

The Colombian moved next to Quagliarella creating a 2vs2 against Murillo and Miranda, with Alvarez providing the attacking width from the right. The whole left side was occupied by Dodo, who had Correa, ready to combine with him, in the left half-space.

This change, though, could not bring any results as soon after Icardi scored his team’s third goaland practically finished the match.

It was another non inspiring performance by Mancini’s Inter, who however fixed some already existing problems (set pieces) and also these which appeared during the game. Sampdoria on the other side played a much better game than the final result indicates.