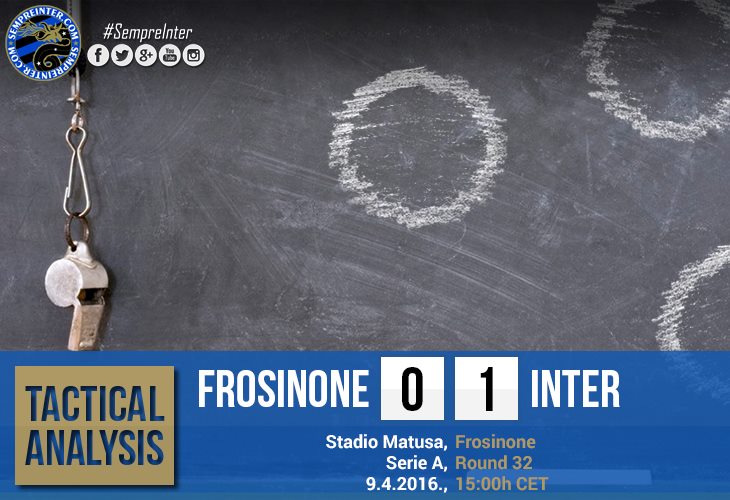 Roberto Mancini chose to field his Inter side in 4-4-2 formation, staring with Samir Handanovic under the posts. The Slovenian was protected by a four man defense that consisted of Telles, Murillo, Juan Jesus and Danilo D’Ambrosio. Felipe Melo and Brozovic created the double pivot that tried to create safety for the defenders but also in order to allow to the front four to play higher up the pitch. Biabiany and Perisic played on the wings, moving centrally more rare than usual, primarily due to Jovetic’s presence, who on his return had a free role to move behind or next to Mauro Icardi.

Roberto Stellone on the other bench, chose a 4-3-3/4-1-4-1 shape. Leali was the Goalkeeper behind a defensive that included Rosi, Ajeti, Blanchard and Pavlovic. Gucher was the defensive midfielder with Gori and Frara playing some metres in front of him. Paganini and Kragl were the two wingers flanking the striker Ciofani.

It was probably one of the less thrilling games of the season and for sure the least interesting one from a tactical point of view.

What shaped the game

The whole match seemed like it was shaped and influenced by Frosinone’s marking and Inter’s ability to find it’s weak spots and take advantage of them.

Above you can see how Frosinone’s man oriented defensive scheme was during Inter’s build up from the back.
Ciofani was pressing the ball carrying CB cutting him simultaneously the connection to the other CB and forcing him to have only passing options towards one side of the pitch, while the CMs were matching the movements of Melo and Brozovic and the wingers were moving in relation to Telles and D’Ambrosio.

This man orientation, created a lot of opportunities for Inter, such as through quick combination plays and one twos, but primarily through trying to take advantage of the 4v4 that was created against the opposition defense. This 4vs4 combined with the following of the forwards’ dropping movements by the defenders meant that huge spaces were created between the Frosinone defenders. When the defenders didn’t choose to follow the dropping movements of Jovetic there was spaces to be found next to the DM and behind the CMs. It seemed like a win win situation for Inter, against a team showed from early on a lot of tactical deficiencies.

However, as always, Inter didn’t make it as easy as it seemed.

Fake runs by wingers to drag out of position the FBs and isolate Icardi or Jovetic in 1v1 situations against CBs although seemed like an easy solution was not attempted more than twice. Furthermore, Jovetic and Icardi were capable to make simultaneous movements and open spaces between the CBs, but the very low positions of Brozovic and Melo and the almost nonexistent movements towards the centre by the wingers meant that there was no one close to take advantage of them.

Those problems on the part of Frosinone were primarily obvious when Inter were building the game from the back and the team from Lazio was stretched laterally. When the ball was on Frosinone’s defensive third though, with them sitting in a low 4-5-1/4-1-4-1, tha game was another story, as Inter were not able to find spaces and combine quickly enough in order to create chances.

The second half started with Inter seemingly aware that a more direct and long ball game, that would have caught Frosinone unorganized and in lots of 1vs1 situations, would have been the best solution to break the opposition defense. However, the execution was much more sloppy, in terms of passing, controlling and connections, and that lead to many more lost balls and a match with continuous transitions.

The goal, finally, was found by an Inter side that took advantage of one of the abovementioned Frosinone defensive problems.

As you can see above, after not being pressed by his marker Felipe, Melo makes a ball to Jovetic who receives it in the space next to the DM and behind the CMs. The Montenegrin then passed to Perisic who made the assist for Icardi’s beautiful header and goal.

Stellone’s response came after 8 minutes, when he brought on Longo, replacing his DM Gucher and changing to a 4-4-2.
Unfortunately for him, Blanchard received a red card almost immediately after the substitution and the ten-man Frosinone ended the match in a 4-3-2, without managing to score.

It was another uninspiring win for Inter, against a side that although incapable to get hold of the ball and circulate I properly, created the biggest chances of the game, either from fouls or after rebounds from reflected shots.