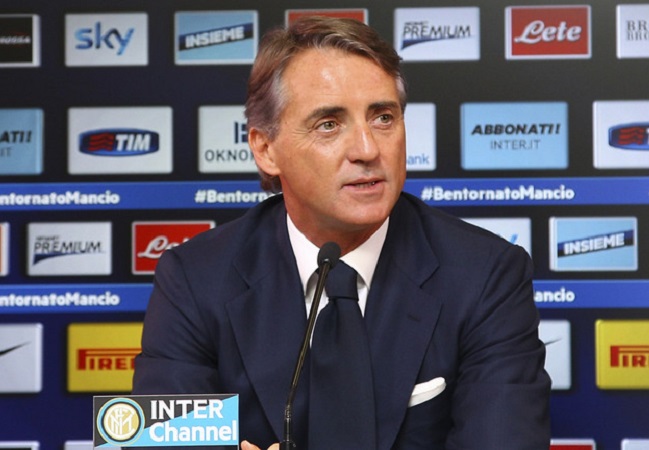 A short while ago Inter coach Roberto Mancini finished the press conference ahead of tomorrow night’s match against Eusebio Di Francesco’s Sassuolo.

Did you have to talk to Handanovic and Jovetic?
“They did not say anything. Handa said that he misses the Champions League, which we all do. We will try to win the Europa League. There are teams in Europe who have invested 400 million and haven’t played in it for a long time.”

Is it Fantasy Football to think Ibra can come to Inter?
“He has always done well, this year he has been extraordinary. It’s strange that PSG is letting go of him, he still makes a difference.”

Do you demand more continuity from Jovetic?
“We signed him because we believe in his quality. We hoped he could do better, he must acclimate. I think he can do much, much more. He can score 15 goals and 20 assists.”

Convinced that you will stay at Inter?
“If the club is happy, if the fans are happy I will stay. If not we will rip up the contract, I won’t stay at home with a contract. If we are all happy we move forward.”

Are you staying regardless of the project? “I have to talk to the President, I have to figure out what we can do. We’ll see. The team has a good foundation, we can improve with the addition of a few important players. That’s my goal.”

Is Yaya Touré in your plans?
“He’s at City, I don’t want to talk about him. A player like him has never been seen in Italy. They have criticized him, but there’s no one like him here.”

Criticism for the line-up?
“I have to consider whether these young players who have good qualities can stay with this team.”

You made a growth process. Can this team make the leap?
“We have a good base. Five, six players that are definite starter, and now it is not difficult to add 3-4 to help us make the leap. We never once suffered head to head against any team, apart from the Fiorentina. Even against Juventus there were always close matches. That’s an important factor. The players have improved, Perisic and Kondogbia have made huge leaps. Gazzetta dello Sport puts us together with Torino and Lazio after all the others, even Milan. I think it was right but we didn’t do that bad.”

Would you prefer to have Milan or Sassuolo in the Europa League?
“I don’t care… Milan have the chance to go there.”

Will you be asking for Ibrahimovic?
“Zlatan is changing matches in Italy, he can make a difference.”

Financial Fair Play?
“Difficult to clarify, we will see what we can do.”

Coaches with an expiring contract are under more pressure in Italy. Do you think there will be a one-year extension with a dotted line during the meeting with Thohir? “It’s not important. The club does what it thinks is right. For me, having a one-year contract or extending it changes little.”

If you don’t like the program, you can say goodbye?
“I didn’t say that. If the club is not happy with the work done, as well as the fans, I can rip up the contract. Not everyone understood that we are building the team. If things are clear to everyone, then ok. If they tell me to go on with 11 young players, I do it, just to be clear.”

Do you feel like your starting behind the other teams?
“Certainly. Juventus, Napoli, Roma are superior to us. This is a certainty, then in football you never know.”

Inter could have signed Nainggolan and signed Hernanes. Is ideas more helpful on the transfer market than money?
“I don’t know this about Nainggolan. Hernanes is a great player, we sold him because we were forced to sell him, he has quality, experience. He was one of the best in Serie A. Juventus signed him. We have been forced to sell players in order to have money for Financial Fair Play.”

It’s fundamental to know whether the club is happy. Do you feel that he team is with you?
“I’ve never had a team this good in that regard, they always work in the right way. There is not a problem that arises.”

Have you told the club who you want to keep?
“We have not yet spoken. We wait and I will talk with the club. It’s difficult to talk about that now.”

What does the club have to do now to make you happy?
“I am happy, everyone wants to win all the time. It’s our goal. We don’t know what we can do on the transfer market… We did a good job. We were in the lead a long time, if we continue to work hard we can reach our goals.”

Exaggerated criticism by the fans?
“It might seem as if we have the team to win the championship, but that’s not the case. But it is normal, they can’t be happy when the team loses. It’s important to be clear about the objectives.”

Handanovic? His successor?
“He didn’t say anything serious. Then you never know what can happen on the transfer market.. If the transfer market offers Handanovic the opportunity to go play in the Champions League and if Inter were to receive an offer we’ll see. Sometimes the right thing to do is to satisfy the demands of a player.”

Do you really want to give us the line-up?
“Carrizo; D’Ambrosio, Jesus, Murillo, Nagatomo or Telles; Kondogbia, Brozovic, Melo or Gnoukouri; Jovetic, Eder and Palacio.”