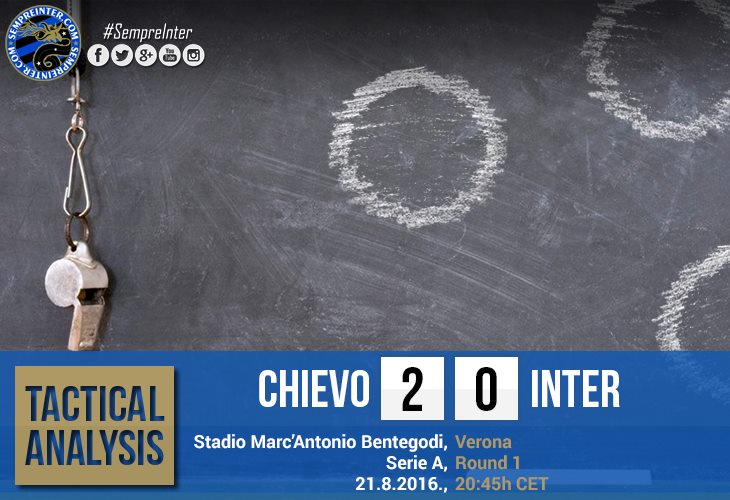 The Frank de Boer era started with a 2-0 loss and a disappointing performance as his team struggled to match the demands of their new playing style, looking also physically, and in terms of execution, unprepared after a very recent change of coach.

The Dutchman surprised everyone before the start of the match by not including the impressive during the Euros Ivan Perisic, deciding to field Antonio Candreva instead. He also decided to move away from his default 4-3-3/4-2-3-1 or even the 3-4-3 formation that he had used at his previous club Ajax, opting for a 3-5-2/5-3-2 (depending on the positions of the wing players) formation.

Most of Inter fans and football fans in general, however, justifiably ask the question: Why did he chose that formation?

Playing a possession style of football like the one that De Boer wants to implement demands good ball circulation, changing the side of the game quickly in order find spaces on the other side of the field, and security when it comes to the defenders holding the ball and keeping it as they are the ones who start the build-up.

This last reason was why the Dutch coach chose the 3-5-2/5-3-2. Having a numerical superiority of 3vs2 against the Chievo forwards or 4vs3 (if we include Birsa and Medel also), meant that the build-up, and also recycling of possession, of Inter’s game would start from the back with much more security as the extra man in those situations would offer an option against possible pressing from the opposition.

Another theoretical advantage that this choice had, was that with Banega and Kondogbia occupying Chievo’s CMs, Candreva’s and Nagatomo’s lower positions on the pitch, compared to a classic winger position, meant that especially after a quick change of sides to the game, the opposition FB would have to get far from his defensive line in order to apply pressure leaving a big space behind him for Eder or Icardi to exploit.

The final and most simple reason was that with a 5-3-2/3-5-2, Eder and Icardi could both play in their natural positions. With Icardi being also very good at creating spaces, by dragging defenders, for his teammates and Eder being much better in a front two, as well as the much more reduced defensive workload for the Italian, compared to if he had to play on the wing, a 3 man defense 2 man attack formation choice didn’t seem that bad or unrealistic.
However, by theorizing nobody won anything in football.

In a possession style of football, quality of pass like the speed in which the ball moves and in which foot of the teammate the ball is sent is very important, just as taking the least possible touches on the ball in order to speed it’s circulation is. Understanding positioning any given time and identifying free spaces to move or to pass into, however, has to be the most important prerequisite.

The importance of those abovementioned traits was much more obvious as Inter faced a team that sat back with a low block and a central focus that left spaces only in the less dangerous wings.

But Inter had none of these prerequisites.

Coming from more than a year and a half under a much more direct and wing focused game like Mancini’s, the nerazzuri players were found totally unprepared for this match after just two weeks of practice with their new coach.
Very slow movement of the ball from side to side was leading Chievo to slide laterally continuously without having any problems or spaces created between their players.

Inter players were also unable to change the side of the ball or even identify at times the small triangles created at the other inside channel between the CM, FW and WB.

Above we can see a situation that occurred more than once during the game. As the ball is on the left wing, a triangle between Candreva, Kondogbia and Eder is created, ready to receive the ball and take advantage of their numerical superiority against the two closest Chievo players. However, slow ball movement, bad connections and support meant that the ball did not at all or not at the correct time reach the other side.

Bad space identification was also another big problem, as de Boer’s players were not seeing and understanding the right spaces to move or to pass to.

In the above situation Medel is too slow to turn his body and identify the yellow space, leading the defender to apply pressure much more effectively. He also does not have any close support behind him that would have enabled him to pass back in order for his teammate to pass to this space. To make it worse, none or Kondogbia, D’Ambrosio and Candreva move into this space to receive the ball.

All of the abovementioned problems led to this:

In the above diagram you can see the connections between the Inter players, the bigger the line between two players is, the more passes they have exchanged.

It is obvious how the ball was circulated continuously from side to side, from wingback to wingback, leaving Chievo to organize properly. You can also see how isolated Eder and Icardi were with an incredibly small number of passes reaching them. Candreva’s and Nagatomo’s lack of reaching the middle is also obvious and a big reason for why Inter were so harmless.

De Boer’s move to put Perisic in, replacing Candreva, and leave the Croatian to move much higher, had no results as Inter showed signs of fatigue, with players moving to contest the ball much slower and showing lack of quickness that couldn’t have changed the direction of the game.

Inter appeared unprepared physically and in almost every aspect of execution for the start of the new Serie A season, after a very late change of coach and playing style deep into the summer clearly affected them. Their individual quality, finally, didn’t prove enough to win them the game.

P.S. The Italian media since this loss have been writing article after article condemning the Dutch coach and his choice of formation. The reality is that the formation had nothing (or very little to do) with the result of match. The execution was poor and a 4-3-3 or a 4-2-3-1 wouldn’t have made any difference with all the above mentioned problems existing.