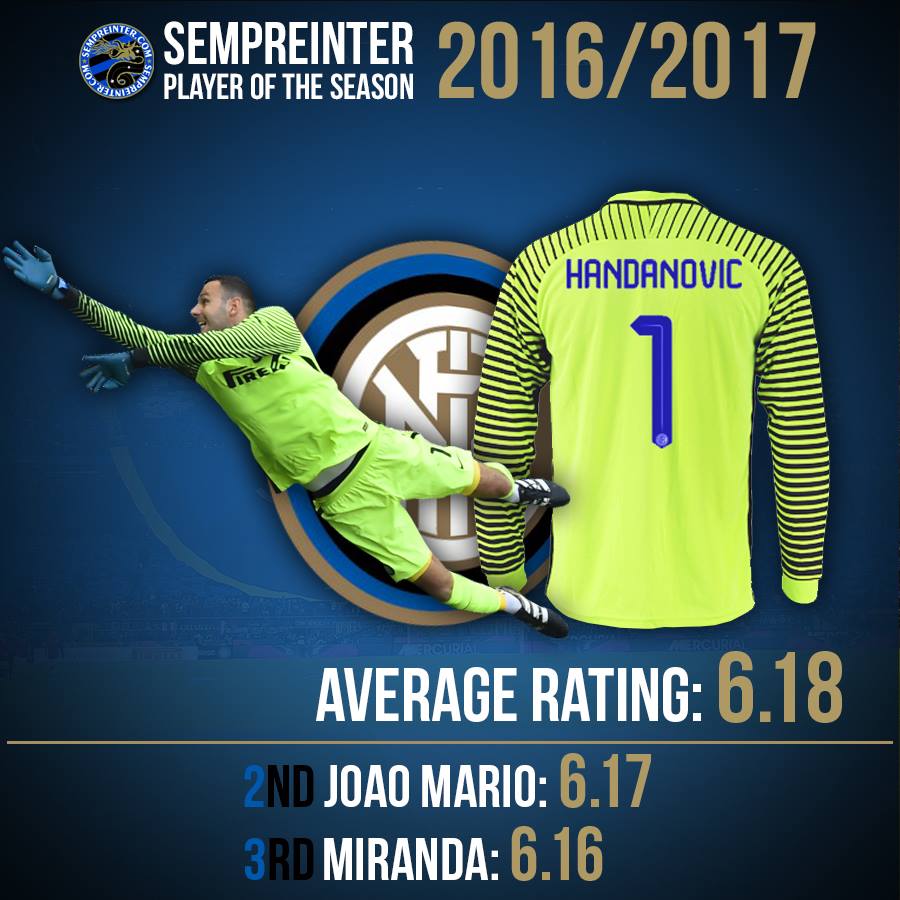 After what has been a very tumultuous season, even by Nerazzurri standards, it is none other than Samir Handanovic who just about beats Joao Mario to the SempreInter.com player of the season 2016-17 title. It was very close and the top 3 were separated by 0.02 points.

Handanovic’s top 3 performances: Ratings wise, his best was 7.5. In his 42 appearances this season Samir managed to get a 7.5 vs H.Beer Sheva at home (0-2 loss), Southampton at home (1-0 win) and the away trip to Juventus Stadium (0-1 loss). That 2 out of his 3 best performances came in defeats sums up Inter’s really season well. On his day, Samir can lay claim to being one of the top goalkeepers in the world but these days were few and far between this season. To make matters worse the defenders in front of him were inconsistent and lost their heads quite often. Apart from the brief Pioli-led revival Inter struggled to keep clean sheets. Facing all these difficulties and almost always being against these odds it is very heart warming to see that Batmanovic is still managing to be one of Inter’s top performers. Lets hope the Nerazzurri number 1 has better defenders next season and can finally find that next level to his game.

Joao Mario’s top 3 performances: The most expensive signing of the season came in second, just 0.01 off Samir’s rating. Unlike Handanovic, whenever Joao Mario played well, Inter won. His best rated performance was against Genoa at home where he was rated an 8. His next best was 7.5 against Empoli, where he slipped a sumptous through ball to Icardi. The Euro 2016 winner also got a 7.5 against Bologna in the Coppa Italia where he was simply brilliant as a trequartista. It needs to be noted that all his best performances came before January and he missed goals that were easier to score. The drop of form affected the team and was one of the reasons Inter couldnt hit the Champions League target this season. Joao Mario has all the ingredients required to be a ‘fuoriclasse‘ midfielder and Ausilio, Sabatini and the new coach Luciano Spalletti should be looking to extract his best if Inter want to be in the top 4 next season.

Joao Miranda’s top 3 performances: Rounding off the top 3 is none other than Inter’s only consistent center-back Joao Miranda with 6.16. At many times this season it looked like he was only player in Inter’s squad that knew how to play the role. Miranda is the leader in defense and there is nobody even close to him in terms of knowing what needs to be done when needing to stop opponents. His highest rating of 7 was achieved 5 times this season. He got a hattrick of 7’s vs Juve, Empoli and Bologna, all in the space of 7 days in September. His next rating of 7 was against Southampton in the Europa League at home where Inter got a win to keep the European hopes alive. The other 7 came against Lazio just before the winter break. Like his doppelganger Joao Mario, all of Miranda’s greatest hits came before the winter break. He has the quality and here’s hoping that he finally gets the defensive colleagues that are willing to help him as opposed to put him under more pressure next season.

Honorable mentions: Mauro Icardi came in 4th with 6.11 and also  Roberto Gagliardini (6.10) and Gabigol (6.00) who alongwith the top 3 were the only players to keep their averages above 6 over the season.

How ratings are calculated: An average of all the ratings is taken for all games played over the season (both SempreInter and Gazzetta dello Sport). We only take the averages of players who have been rated (whether starting or coming on as a sub) in over 60% of the games. For ex: If Gagliardini had been rated higher than Handanovic, we wouldn’t have rated him as the player of the season because he only played a part in 40% of games this season.