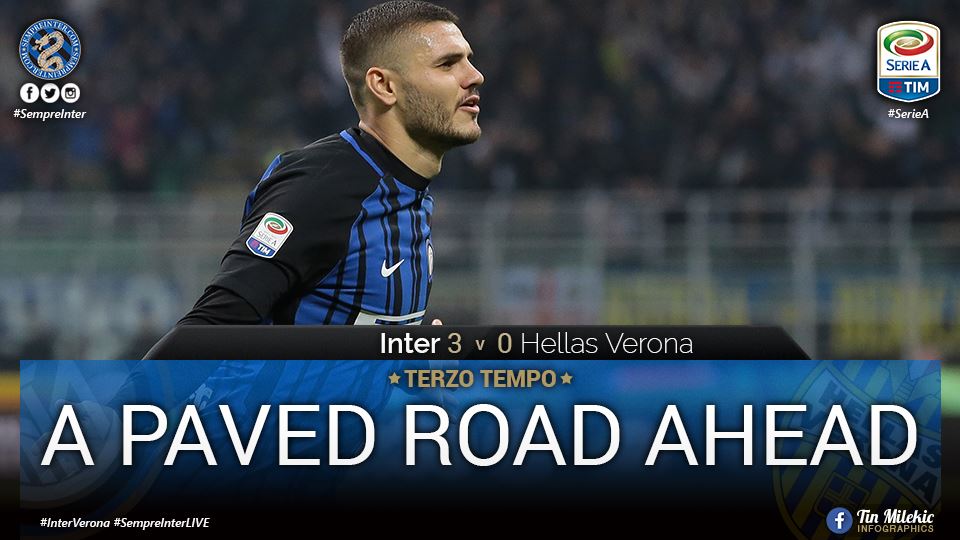 Inter played Verona at home in a game that was exhilarating in so many different ways. It was probably their most efficient performance in a very long time. Even last games five nothing victory didn’t have the fluidity that this game had. Fans and people around the world saw a collective Inter team instead of what they had been bringing us for a while which was three divided lines between the offence, midfield and defence. Today the fluidity reached great lengths in regards to the way the players interconnected with each other.

In the back of the field the back line help up incredibly well, Skriniar and Miranda being incredibly solid as usual. Cancelo moved up and down the field with elegance as usual, which is something the world has become accustomed too. What’s particularly interesting to note in todays game is D’Ambrosio’s positioning on and off the ball. D’Ambrosio played fairly higher than he’s normally comfortable with which enables him to tackle earlier which results in a turn of possession higher up the field which is noticed within the first minute.

In the mid field, Gagliardini and Brozovic have seemed to link up incredibly well, they support each other incredibly well and cover each other even better. When one carries the ball the other shifts very slightly inwards covering the space in front of the backline until their partner can get back into position. Another important thing to notice is the way Gagliardini was able to slot in so well into both positions of the missing full backs. For example, if Cancelo decides to carry and turns over the ball in the midfield Gagliardini did a fantastic job slotting into that left back position completing that back four.

In regards to the final third of Inters men with Perisic, Rafinha, Icardi and Candreva, Spalletti seems to have implemented a few new instructions which have clearly seemed to pay off. Icardi came in incredibly tight to Rafinha between the oppositions defence and midfield line which drew the center backs with him because logically Icardi needs to be baby sat all game or else the opposition risks conceding very heavily. This leaves that whole behind him which resulted in Perisic’s goal. Another thing that to note was the even distribution of the wings, it seems like the days of forcing Candreva to perform an abnormal number of crosses is over, Perisic was very involved in the distribution into the box which saw Icardi’s second goal. The last thing to note is the double stack out wide which sees Perisic and Candreva both on the same wing which can be very confusing for a backline because now they give themselves the advantage in numbers for a couple of seconds.

In conclusion, the result puts Inter in a fantastic position for the midweek game they face; the derby. A head of Inter is a paved road, all thats left is to stay focused and their Champions League goal will be achieved.