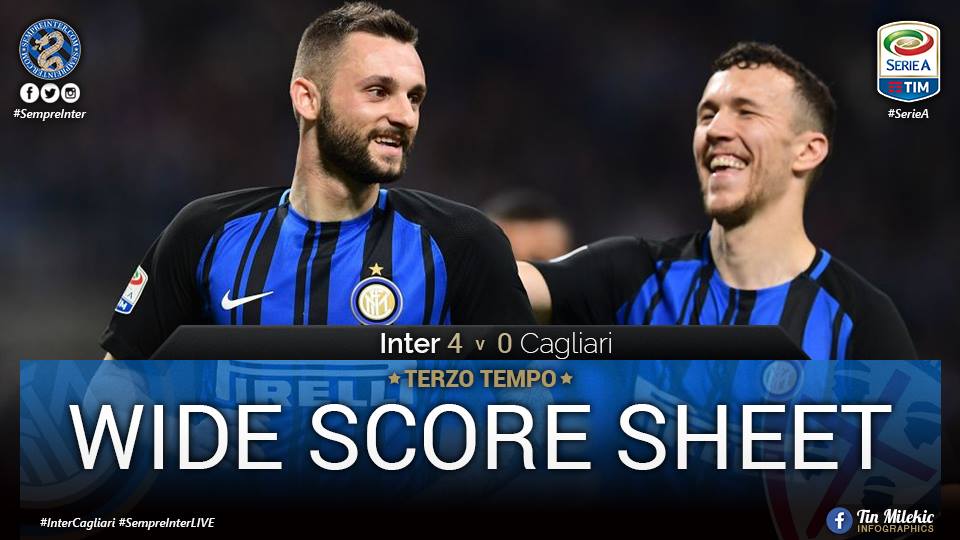 Inter played Cagliari at home in a game that was electrifying from the get go. The result of the game aside, what the most crucial aspect to retract from this game is the fact that Inter was absolutely dominant for an entire ninety minutes. They were never on the back foot and for the entire game dictated the pace of the game. The formation was reverted back to the standard 4-2-3-1 but in a slightly different instructions which is a better alternative for the front which seems to be a method that works a lot better because they don’t have to rely so heavily on the outside players.

With regards to the back, what started with Santon last week was reverted back to D’Ambrosio at left back instead of seeing him in the middle of the three. The middle consisted of Miranda and Skriniar who played completely shut down games and lastly Cancelo on the right. What was very different in the game was how high both wing backs played in comparison to the standard overlaps that is usually given to the players by Spalletti. Both wing backs playing very high is basically the result of the wingers being pushed into a more central role which would see the wing backs have the responsibility of staying wide and whipping the crosses in.

In the back you’re left with Skriniar and Miranda but whats interesting is that one of the defensive midfielders almost completely drops into a center back role. With the wingers pushed slightly inwards, it leaves an extra option between the elevated wing backs and Rafinha instead of playing directly from wide to Rafinha or from out wide to Icardi they have Karamoh and Perisic who can be a good option to either shoot or to turn the ball in a more central manner instead of relying so deeply on Perisic and Candreva to stay wide and just feed Icardi.

What made Inter so successful was the fact that they were playing through the middle and that wouldn’t have been possible if it wasn’t for the way the front three and Rafinha played. Perisic and Karamoh playing closer together allowed for Rafinha to drop in closer and be able to retrieve from deep down, turn and distribute to a closer option rather than out wide.

If they happen to be caught wide then Icardi’s new instructions seemed to be absolute perfect for him. Icardi seems to have been instructed to play very strong with his back to the net, hold up the ball for as long as positive and then distribute out wide which once again encourages the play down the middle.This very strong central philosophy may not be the most complimentary style to Mauro Icardi’s journey to being top goal scorer of the league but it played such a crucial role in getting a wide variety of different players on the score sheet instead of relying on Icardi and Perisic.