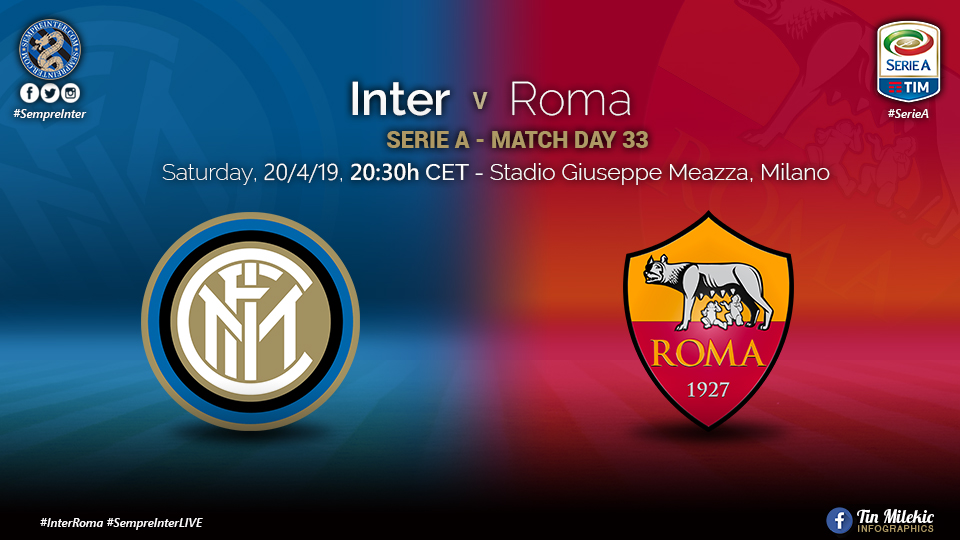 After disposing of Frosinone last week, Inter look to all but seal the Champions League qualification by trying to beat direct competitors  Roma. Match on Saturday at 20:30 CET.

Inter have not managed to secure two consecutive wins since mid February, which doesn’t bode well for the Nerazzurri seeing that they’ve just beaten Frosinone last week and might be due a draw or a loss. But keeping attempts to look into a statistical crystal ball aside, this match presents Inter with a golden opportunity; a win here will put at least seven points between them and fifth place, meaning that they would only need eight points from a possible fifteen to guarantee the coveted Champions League qualification.

A loss or a draw will throw them right back into the dogfight for fourth place, which would be the source of an unnecessarily nervy ending to the season.

Roma and their new interim manager and ex-interim Inter manager Claudio Ranieri will know that a loss here will be devastating to their fourth place aspirations, and so, may opt to play for a draw rather than risk it all for a win.

While Roma’s back-line has seemed less porous since the introduction of Antonio Mirante as the first choice goalkeeper ahead of Robert Olsen, but there’s no doubting the fact that their defensive liability remains their Achilles heel.

Kwadwo Asamoah and Danilo D’Ambrosio will be tasked with keeping the Roman’s main attacking threats in Nicolo Zaniolo and Stefan ElShaarawy at bay, both of whom have strong ties to the Meazza. But it appears that the match will be decided by the state of the Inter midfield trio.

If the predicted starting trio of Matias Vecino, Roberto Gagliardini and Radja Nainggolan are able to both individually play to their potential and to operate as a cohesive unit, expect them to be able to overwhelm the Roma holding pair of the sluggish Steven Nzonzi and hot/cold Bryan Cristante.

Fundamental to keeping Inter’s back-line protected and threatening their opponents goal credibly will be the fluid interchanging of spaces of the aforementioned midfield trio. While Gaglia does his best work ten yards or so behind the trequartista, Radja and Vecino have both demonstrated an ability to being decisive further up the pitch while simultaneously providing physical defensive cover. The three points will require desire, output and grinta.

With Lautaro Martinez fully recovered, the big question out of the Inter camp is whether he will start ahead of Mauro Icardi. Marcelo Brozovic remains injured and so both Roberto Gagliardini and Matias Vecino will be the double pivot in the midfield.

Last 10 Head to Head: The record of the head to head encounters between both sides could not be more finely balanced, wins each and four draws. Of the wins, each side has two home wins and one away win.

Radja Nainggolan: The Belgian gladiator was, yet again, a protagonist against Frosinone. If the attacking midfielder can truly rediscover his form and bring his new team a victory against his ex-employers, the talk of his transfer being a dud will diminish by a few degrees.