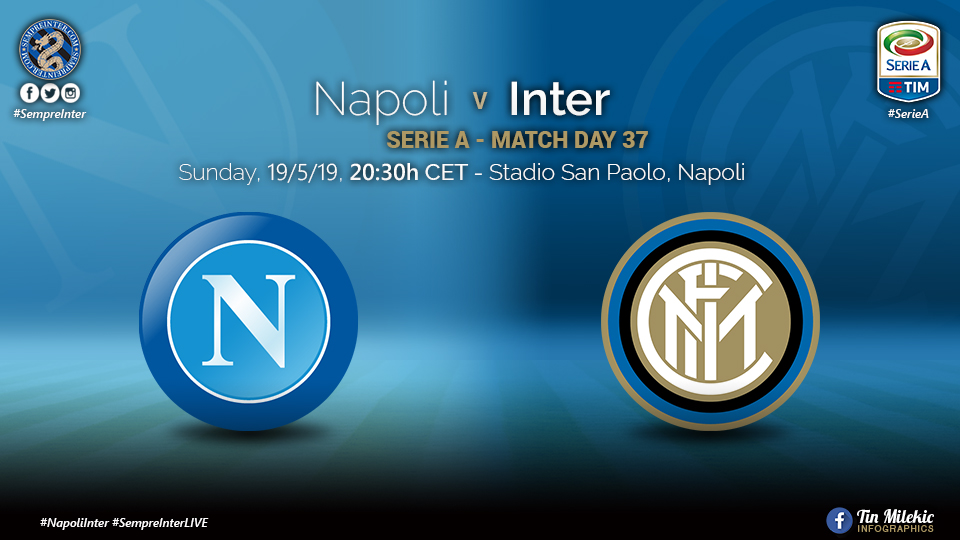 Inter still have it all to play for while Napoli have literally nothing to gain or lose except the match points, with a win guaranteeing Champions League football, will Inter be able to pull off the upset? Match tomorrow night at 20:30 CET.

One would be hard pressed to find any calcio fan who would honestly attest that Napoli’s season this year has been an improvement, across any metric, on the previous season. While the Partenopei do not strike the same fear in their opponents’ hearts as they might have last year, the have shown a level of pragmatism and directness that the might have been unable to express last year under Maurizio Sarri’s system first philosophy.

Under Carlo Ancelotti, Napoli might have regressed a few notches in terms of output, but they have been able to add a bit more diversity in looks and setups than the had last year.

Therein lies the danger in facing Napoli this year; they are much more difficult to predict in terms of line-up, tactics and even attitude. The hosts ran through a bit of a rough patch in April which saw them bow out of the Europa League, but they have since steadied the ship and strung together three wins in a row. This means they enter this match having guaranteed second place and with nothing but bragging rights to really play for.

Inter come into the match after having finally secured a win following a three match win-less skid. They can now guarantee themselves Champions League qualification with a win here and spare their supporters last match hyperventilation as they’ll have to wait until the final whistle in the season the learn their fates.

As with last week’s match against Chievo, Inter must use the pressure of the occasion in their favor and not let it ruin their ability to deliver on the day.

With Luciano Spalletti having more than one leg out of the Inter door, one may question the motivation level of the Italian tactician. That said, the situation was not too different last week, and Spalletti then still showed himself to be a true professional and set his side up with the right oomph and nous to navigate a potentially tricky encounter.

Spalletti will probably utilize Antonio Candreva on the right wing to replace the injured Matteo Politano, and will be happy to welcome back midfield metronome Marcelo Brozovic to provide the incisive forward passing and distribution that Inter often rely on when going forward.

To pull off the unlikely win here, Inter must attack the hosts but respect their prowess. A high-impact physical performance will be necessary by all ten outfield players if Inter have any chance of meeting their season’s objective here.

Good news/bad news out of the Inter camp this week. On the one hand, Danilo D’Ambrosio and Marcelo Brozovic both return from their suspensions, on the other hand, Stefan de Vrij remains sidelined due to his muscular issues and one of last week’s stand-out performers Matteo Politano will probably miss the match. After Mauro Icardi’s poor showing against Chievo, expect the more energetic Lautaro to start for him.

Last 10 Head to Head: Inter have not won a league match at the San Paolo in over twenty three years. Keeping that incredible statistic aside, one finds the overall balance between the two sides more evenly balanced with Napoli slightly edging Inter by three wins to the Nerazzurri’s two over their last ten league encounters.

Antonio Candreva: Despite having had a forgettable season so far, where the Italian winger has been the butt of most Interisti’s jokes, the Candyman had a pretty decent showing when he came on for the injured Politano last week where he even managed to provide the assist for the Perisic goal. With Politano still out this week, Candreva must put in his performance of the season if Inter are going to take anything out of this match.

Prediction & scorers: Napoli 1-2 Inter with Nainggolan scoring and Vecino sealing it for Inter.

Concluding remarks: Despite entering the match as firm underdogs, Inter can really sow the seeds for a strong showing next season by finding the win here. Beating a possibly under-motivated Napoli can mean so much for the squad and provide concrete evidence of season-on-season improvement which is an opportunity that the Nerazzurri must not pass up.