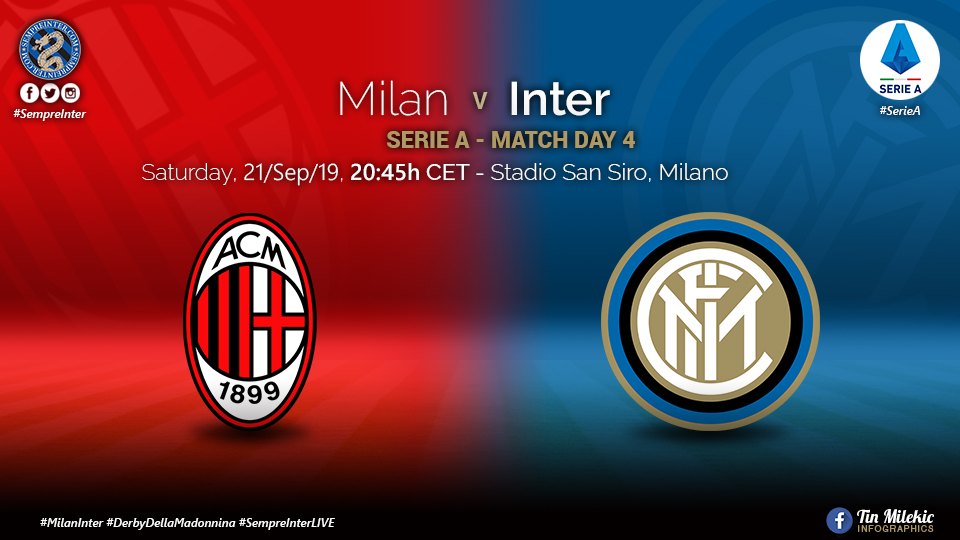 After the midweek Champions League disappointment, Inter look to cleanse their palate with a tough and hungry performance in the Derby. Match tomorrow Saturday at 20:45 CET.

Antonio Conte said it clearly at the press conference after the win against Udinese, he told the press in no unclear terms how they’re looking to build up the team quickly in order to sweep the hype rug from under their feet at the first stumbling block.

And so it has exactly panned out; after a disappointing draw and performance against Slavia Prague in the Champions League opener, there’s now talk of a crisis in Inter less than a week after touting the Nerazzurri as genuine title contenders.

Reports in the media of locker-room discontent are ostensibly picked up in the press on this sensitive week in order to create some drama ahead of the derby and possibly try and bridge the gap between the two sides. Inter, midweek draw aside, seem to have taken to Conte’s tactics immediately and now sit alone at the top of the league table with three wins from three. Milan’s fortunes in the Marco Giampaolo era have been less rosy. The Rossoneri  have a loss and two narrow wins against relegation contenders Udinese, Brescia and Hellas Verona respectively.

Most worryingly for Milanisti is the apparent lack of coherent direction so far by Giampaolo, the Italian tactician seems still unsure of what his preferred tactics or lineups are, especially in the attacking department. Milan’s defense, led by Alessio Romagnoli and Mateo Musacchio is on par with the best in the league, however, it is the attacking module and lineup that seems to be bothering Giampaolo so far.

The manager is trying to fit his best players, Hakan Calhanoglu, Lucas Paqueta, Suso and Krzyztof Piatek in some combination or other that allows them all to play well both as individuals and as a unit as well. He seems unable to have unlocked the combination so far.

Conte’s Inter’s midweek stalemate against Slavia Prague has unsurprisingly been blown out of proportion but both media and pundits alike. A lackluster performance against a well drilled side in the Champions League opener is most certainly not an indicator of a Nerazzurri meltdown as the media would have us believe.

As a matter of fact, all direct quotes by players and the manager alike seem to show that the disappointing draw will be reflected on more as a point of learning and growth than anything else.

Conte has indicated that the players must learn how to better face difficulty and overcome adversity. He also commented on the players’ inability to implement the game plan due to the consistent pressure by the opponents, all valuable lessons that will serve the side well moving on. Expect him to field a mostly unchanged side from midweek, with the possibility of seeing Nicolo Barella start and Diego Godin returning to the starting eleven once again.

A derby needs no externalities to raise the nerves, all players will be made aware of the heightened sense of anticipation and expectation in the city. With so many Inter players taking part in the derby for the first time, it will be interesting to see how they handle the pressure and the expectation.

No injuries and no suspensions. The alleged heated exchange between Romelu Lukaku and Marcelo Brozovic seems like water under the bridge, if it indeed did occur.

Last 10 Head to Head: Inter hold a clear edge over their cousins over the last ten matches with four wins to Milan’s sole victory. Milan’s only win in the Serie A came almost four years ago in January 2016.

Nicolo Barella: Barella came on in the second half of the Slavia Prague match and immediately had a profound impact on the entire team’s performance. If Barella is to develop into the player we all expect him to be, he must consistently show Interisti the same level of performance as that in midweek.

The only question mark over Barella’s performances so far might be whether he can exist in a module with Marcelo Brozovic. Barella never seems to be his best self when playing alongside the Croat.

Concluding remarks: While the derby usually cares little for the sides’ incoming form and quality, it seems that the gap in development between Inter and Milan is a bit too far for the Nerazzurri to bridge at the moment. While Milan possess a deep and quality squad run by a seasoned Serie A veteran, it seems like the are still to early in the project to be able to express their full potential. In cases, the must not be underestimated.