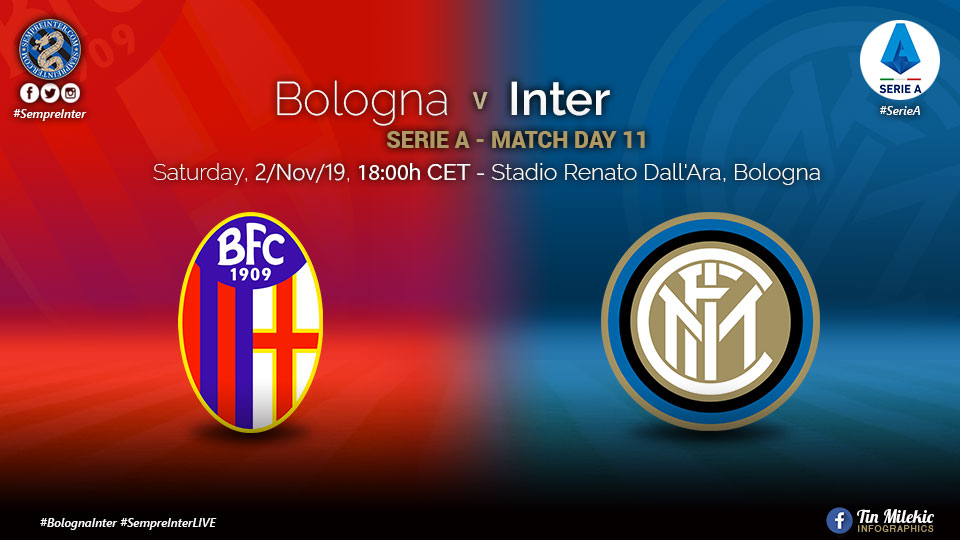 A hard-fought midweek victory kept Inter in top-of-table contention, and now the Nerazzurri play their second consecutive away match against a tough Bologna side. Match tomorrow Saturday at 18:00 CET.

Bologna are a tough side to analyze tactically, as a reflection of their coach’s image, they are generally a physical and highly organized outfit, but beyond that, they have shown little tactical DNA.

The Rossoblu have faced a whole load of extenuating episodes so far this season, between coach Sinisa Mihajlovic’s absence due to his chemotherapy, to the side saluting their manager at the hospital post-match while he was in said treatment, Bologna’s season has been a tad surreal.

All this turbulence has taken the spotlight off the side’s on-pitch performances and arguably allowed the players to develop and perform far from the shadow of any expectation.

While it is difficult to imagine Mihajlovic’s side setting up to dominate the match in terms of possession and gameplay, they do however possess the tools to hurt Inter on the break. Interisti will be more than familiar (and fond of) their to date top-scorer Rodrigo Palacio who will be accompanied by ex-Inter tormentor Nicola Sansone up front. The pair, supported by Serie A veterans Blerim Dzemaili, Roberto Soriano and Andrea Pioli can pose a threat to any side in the top flight.

Inter are more of a known variable. Antonio Conte’s side has largely played with the same formation and a mildly rotated lineup. Expect Conte to deploy a starting eleven very similar (if not identical) to the one used in the midweek encounter against Brescia. While Conte’s starting eleven, even in the absence of Stefano Sensi, is a league beating side, their biggest challenge is fatigue coupled with the lack of quality depth.

Marcelo Brozovic is running on fumes in the midfield and his logical replacement off the bench, Borja Valero, seems unable to put in more than ten minutes at full physical output at the moment. Nicolo Barella has been red lining his output for a few weeks since his partnership with Roberto Gagliardini was forced upon him.

Meanwhile in attack, since Alexis Sanchez’s injury, the only viable substitutions at Conte’s disposal have either been teenager Sebastian Esposito or the out-of-form Matteo Politano.

Inter will take little solace in the fact that this match is just after midway in a ridiculous run of seven matches in three weeks, they will still have to travel to Germany for the Champions League and cap the run with home match against Hellas Verona. The question will be whether Inter will be able to dig deep and pull out the logical result or will their season’s physical demands be their downfall.

The big news out of the Inter camp is the possible return of Stefano Sensi. The Italian midfielder has been sidelined for over 3 weeks now and his presence has been sorely missed. One should not expect the diminutive midfielder to make the starting 11 even he is declared fit enough for a call-up.

Danilo D’Ambrosio should also be close to making a return to the squad, but it appears that this matchday is still a stretch too early for his recovery.

Last 10 Head to Head: As with last week’s opponents Brescia, Inter hold a dominant 6-1 record over their hosts. But perhaps more importantly, Inter have not lost at the Dall’Ara stadium since 2002.

Romelu Lukaku: The big Belgian has quickly endeared himself to the Inter faithful. Whether it’s the traditional bow to the fans after scoring a goal, the midweek speech to his teammates over the Inter squad dinner or even the fact that in spite of his performances, all can see that Lukaku puts in all he has in every play, the striker has so far filled the Icardi sized void and more.

Lukaku’s performance and spectacular goal against Brescia midweek were the pillars on which the victory was built. Expect Big Rom to try and replicate his performance this week.

Prediction & scorers: Bologna 1-3 Inter This is a match where the ex-Interista, Rodrigo Palacio, will not score. However, expect Inter to finally score from the midfield, with either Brozovic or Barella adding to goals by Lautaro.

Concluding remarks: It is always difficult lining up against a Sinisa Mihajlovic side. The ex-Interista tactician’s sides are always combative, well drilled and tactically fluid.

There is no compelling reason to believe that this match will be anything but a slog, however, just as with the Brescia match, expect Inter’s quality to prevail and bring home the three points.