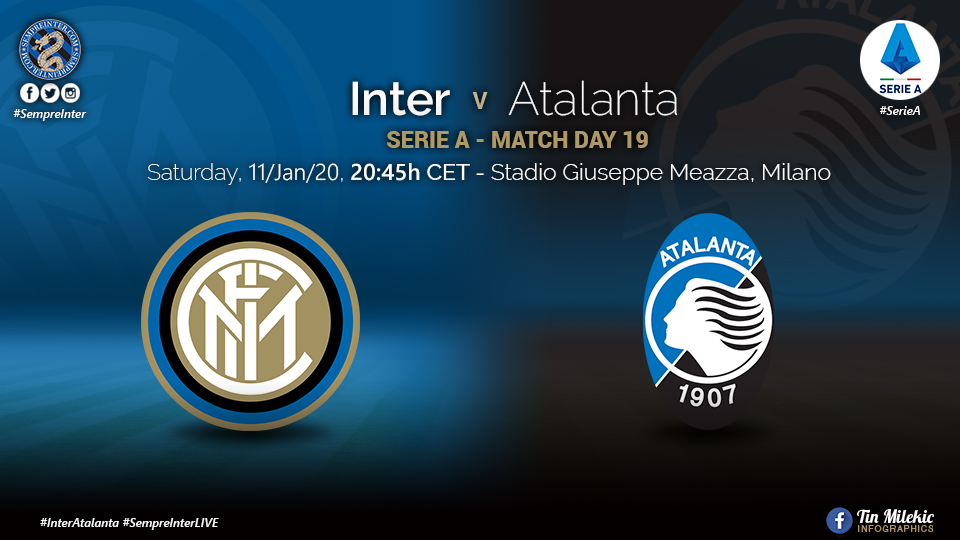 Having broken the San Paolo Voodoo, Inter look to scalp another rival in this week’s match against the high-flying Atalanta. Match tomorrow, Saturday at 20:45 CET

Long gone are the days when Atalanta have been viewed as minnows to be dispatched with ease. The Nerazzurri from Bergamo have, under very capable club management and the watchful eye of Gian Piero Gasperini quickly become one of Europe’s most celebrated projects and lauded teams.

Not only have Gasperini’s men made an unlikely progression to the second round of the Champions League, they have recently been in rampant form, steamrolling Milan and Parma in consecutive 5 – 0 wins. With veteran forwards Josep Ilicic and Papu Gomez on a red hot streak, Inter’s defenses must be in top form and attention if the Nerazzurri are to keep the visitors’ attackers at bay.

To add to the hosts’ concerns is the fact that both Duvan Zapata and Luis Muriel are now fit, adding to the attacking options that Gasperini will have at his disposal.

All said and done, Atalanta are not free of vulnerability. If we have learnt anything from La Dea’s Champions League foray it’s that while Atalanta work hard, run hard and press hard, they can be beaten that do the same but harder.

Conte must make the team selection and map out the match tactics bearing in mind that his side must be in top physical condition for the entire duration of the match.

Inter must be able to express multiple facets and modes to their management of the match. High intensity pressing and quick passing must be seamlessly integrated with possession and deep lying soaking of the opposition’s pressure. Naturally, Stefano Sensi and Lautaro Martinez’s constant movement will be essential in relieving the pressure off their teammates.

Perhaps the biggest headache for Conte will be the right wing back position. With Danilo D’Ambrosio out injured, Conte will miss the defensive surety brought by the combative Italian, and will have to rely on the less defensively capable Antonio Candreva.

This is a high-stakes match for two in-form sides, not one to miss.

With the treatment room finally looking empty(-ish), Conte has to contend with two critical single match suspensions to Milan Skriniar and Nicolo Barella. Both players will miss out on the match due to an accumulation of yellow cards and will have to sit the match out. Danilo D’Ambrosio remains sidelined with his own injury but should be expected back within a few weeks.

Last 10 Head to Head: Despite their reputation as a bogey team for Inter, Atalanta lag behind the hosts by a decent margin with just two victories to five wins for Inter.

Lautaro Martinez: After Lukaku’s devastating performance against Napoli, expect the visiting defenders to be preoccupied with the big Belgian. Lukaku’s equally deadly striking partner, who also is a tab more of a smooth operator might be able to capitalize on the opposition’s preoccupation and find the one or two yards of space that he needs to be able to deliver a deadly strike.

Prediction & scorers: Inter 3-2 Atalanta. Lautaro, Sensi and Brozovic getting it done for the hosts.