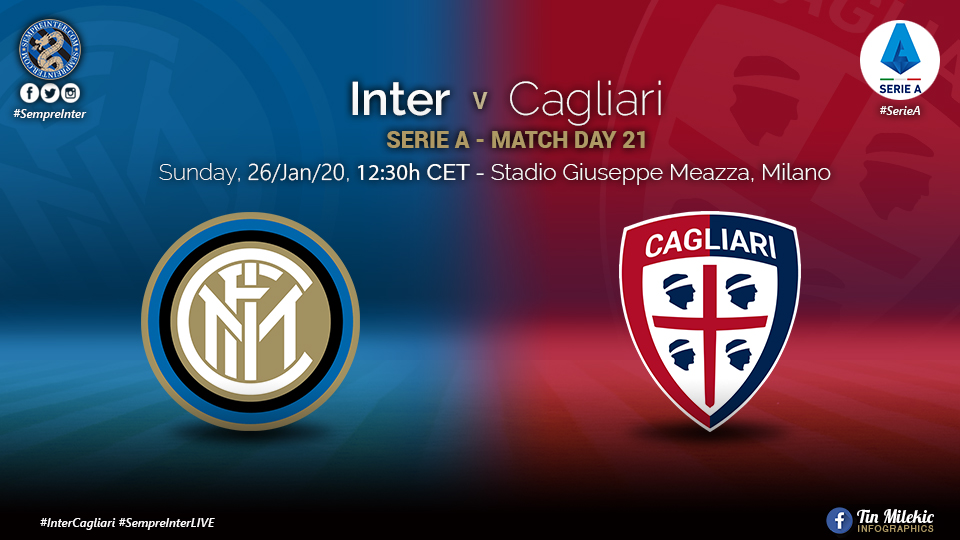 A string of disappointing results has seen Inter drop down to provisional second place, now they host Cagliari and look to play themselves back into the win column. Match tomorrow Sunday at 12:30 CET

After the disappointing draw to Lecce last week, Antonio Conte spoke of Inter’s need to play at maximum intensity for the entirety of a match in order to display their best qualities. Expect the Nerazzurri to start the match like a bat out of hell, Conte will ensure that there will be no slip-ups in this match.

This is doubly important since Inter’s closest competitors are all playing critical head to heads this week, giving Inter a prime opportunity to make up some lost ground in the race for top position.

Conte will want the Stefano Sensi – Nicolo Barella partnership to display the same level of understanding and complementary play as before the pair were injured. This will give the tactician strong pairings at every line on the pitch. With Romelu Lukaku and Lautaro already playing in eerie synchronicity and Stefan de Vrij ensuring his back line works as a cohesive unit; a midfield that operates on the same level of understanding will mean the world to the hosts.

Against Cagliari as seen in the Coppa Italia match, early runs into space by the two strikers will be very important, but hopefully with newcomer Ashley Young on the pitch, Inter can look to threaten from the flanks as well.

Cagliari have had a miserable run of late. A six match winless streak has seen Rolando Maran’s men drop from third place to seventh, and the veteran tactician seems to have no ideas how to get his team out of the doldrums. That said, the Isolani possess an attacking unit that is the envy of most teams in the league. The trio of Joao Pedro, Giovanni Simeone and Radja Nainggolan can wreak havoc on the best of defenses in the league.

Where the Sardinians seems to be faltering is in protecting their goal. Their entire midfield and defensive units have conceded an eye-watering twelve goals in the last five league matches alone. This is highly surprising since Maran teams are usually known for their unspectacular yet defensively gritty play. With Inter’s attack firing well at the moment, Cagliari will have plenty to worry about.

It seems that Conte’s midfield is cursed not to be able to deploy his preferred midfield module in more than two consecutive matches. With Stefano Sensi and Nicolo Barella finally fit, Marcelo Brozovic has now been ruled out of the match due to knock he picked up against Lecce. Antonio Candreva will not be available as the winger is out facing a one match suspension. Meanwhile, Matias Vecino and Matteo Politano who are both embroiled in an away transfer saga will not make the squad.

Last 10 Head to Head: Inter have a clear advantage in the head to head results between the two teams, having beaten the Sardinians six times to the visitors’ three wins.

Ashley Young: The Englishman is touted to make his debut in the Nerazzurri shirt from the first minute in this match. Young is expected to make an instant impact on the flank, providing Conte with a natural wing-back solution who can be deployed on either side of the pitch.

Inter will hope that Young can add the decisive assist that his been lacking since Antonio Candreva’s form waned and Kwadawo Asamoah mysteriously went MIA.

Concluding remarks: While this match can’t be expected to be as easy as the Coppa Italia encounter twelve days earlier, expect Inter to come out guns blazing and ensure that three points are won. Unfortunately it is quite likely that Inter will be bitten by the curse of the ex with a goal by Radja Nainggolan.