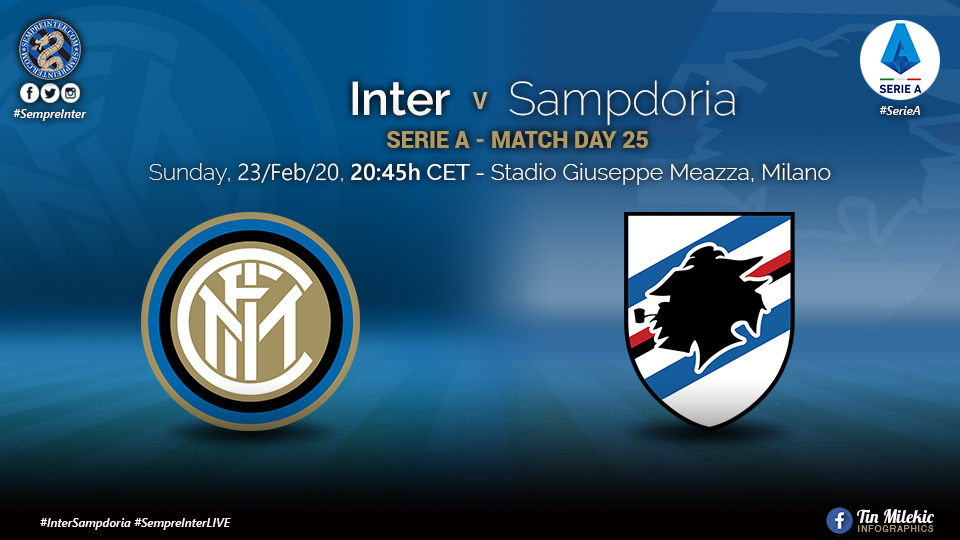 Having exorcised the demons of the Lazio loss in Bulgaria, Inter focus on Sampdoria as the ultimate league match before the pivotal trip to Turin next week. Match tomorrow Sunday at 20:45 CET

Inter had a bit of a wobble with two consecutive losses against Napoli in the Coppa and Lazio in the league which have seen the Nerazzurri drop to third place in the league table and have one foot out of the door in the cup. A very professional yet uninspiring victory midweek in the Europa League will have brought the smiles back to Appiano setting Inter up once again to go on the hunt for league domination.

Naturally, as we approach the Derby D’Italia the following week, the weight of that match pulls in interest and narratives prematurely and may distract from the task at had, which is a potential banana peel of a match against Sampdoria. Samp’s new year has been miserable. They’ve won just two of the seven matches since the calendars turned, and quite remarkably have conceded fifteen goals in their previous five league games.

Claudio Ranieri’s initial impact on the side, where he seemed to have given his team some defensive and structural solidity seems to have all but dissipated. Another loss here can see them go into free-fall and back in the thick of the relegation battle that had seemed to almost escape a couple of months ago.

That said, Samp still do possess some firepower that can potentially trouble the hosts; Fabio Quagliarella is a perennial scorer of goals against Inter and his Swedish teammate and ex-Juventus product Albin Ekdal is always looking to rain on an Inter parade.

Inter must approach this match in the same manner as the Thursday night game against Ludogorets. The team must minimize effort, maximize output and at all costs avoid any suspensions or injuries. While Sampdoria will be expected to put up a real fight, Inter must remain cool and level-headed confident in the knowledge that their superior ability and quality will eventually prevail.

Lautaro Martinez and Romelu Lukaku are set to start the match with Christian Eriksen right behind them, giving the dynamic duo of LuLa more support and the partner to set them free with his incisive last-third passing. Some reports indicate that the central midfield duo of Nicolo Barella and Marcelo Brozovic might be rested as a whole or in part, replacing them with one or both of Matias Vecino and Borja Valero respectively.

In all cases, this should be a match where the result takes precedence over the performance. Inter cannot compromise on the three points, but ensuring defensive solidity and physical output is low will be a priority as well.

Man of glass Stefano Sensi continues his rehabilitation along with fellow midfielder Roberto Gagliardini, otherwise Conte will have a near-full squad to choose from. Perhaps more worrying than the potential injuries to players is the fact that Conte is one yellow card away from serving a one match suspension.

With the Derby D’Italia just around the corner, the fiery tactician must be on his best behavior not to miss the pivotal match by picking up yet another meaningless yellow card. Another x-factor is Samir Handanovic’s condition; the captain seems to have recovered from his finger fracture but all indications point to him being rested once again not to compromise his return for the big match against Juve.

Last 10 Head to Head: The Doria have become somewhat of a punching bag for Inter, with the hosts winning seven of the last ten matches. Perhaps more telling is the fact that Inter have won the last five encounters in a row, both home and away.

Christian Eriksen: Having just scored his first goal for the black and blue in the Europa League, Eriksen will look to play another pivotal role in the weekend’s match. The Dane seems to be slowly but surely taking to Conte’s system and becoming more familiar with his new role and responsibilities.

Concluding remarks: With Sampdoria reeling from their whooping by Fiorentina and Inter with an eye on next week’s match against Juventus, this match can have all the ingredients required for an upset. That said, with Conte at the helm and the players united behind a common objective, expect Inter to prevail.