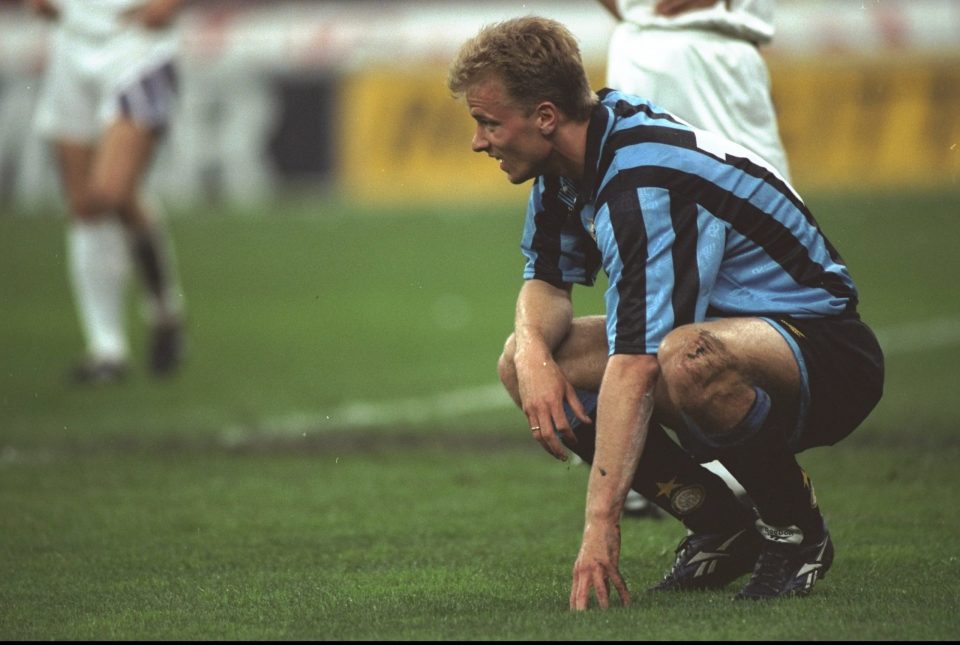 Following last week’s look at Laurent Blanc, we come to the final part in our series of looking at forgotten players of Inter. This week comes on the turn of Dutch striker Dennis Bergkamp who spent two years in Milan with the Nerazzurri.

Bergkamp took the traditional route of starting his club career with Ajax, the giants of his own country, as they made the transition from Rinus Michels to Johann Cruyff.

Following his breakthrough into the first team, Bergkamp became a mainstay in a side that won the Eredivise, KNVB cup, UEFA Cup and also the European Cup Winners Cup.

Individually he became something of a goal scoring machine. Bergkamp scored more than 20 goals in all competitions in his final three seasons with the side which made him much sought after over Europe.

As with many players that have come out of the Ajax academy, an offer came in that couldn’t be refused for Bergkamp.

Inter parted with £7.1 million to bring the man to San Siro, alongside his team mate Wim Jonk. It is reported that Bergkamp turned down the likes of Real Madrid and Juventus to sign with Inter as he felt that the sides style of play suited him better.

This certainly appeared accurate as Bergkamp made a solid and consistent start to his time with Inter, forming part of a three pronged attack alongside Salvatore Schillachi and Ruben Sosa.

Inter’s coach Osvaldo Bagnoli soon started to tinker with the side and the pressure started to mount as results went against Inter.

Inter finished a shockingly low 13th place in 1993/94, just one point above a relegation place, but for Bergkamp it wasn’t all bad.

On the European stage, Inter managed to win the UEFA Cup, beating Austria Salzburg over two legs with Bergkamp being named as the player of the tournament following his eight goals on Inter’s route to glory.

Despite a troubling start to his Inter career as they toiled away in Serie A, Bergkamp managed 18 goals in all competitions and many Nerazzuri fans were hopeful that there was more to come.

The following campaign however brought disaster for the Dutch striker as he started to become a target for the Italian media when Inter were floundering.

Bergkamp came off the back of a World Cup summer with a number of nagging injuries and struggled to break into the starting lineup. The media began to speculate about his future and targeted him for appearing withdrawn on the field and criticised his unwillingness to participate in any post match interviews.

After a number of poor performances, the media set about labeling him a ‘donkey’ with one publication renaming their ‘donkey of the week’ award to the worst player of that particular match day as the ‘Bergkamp of the week’.

Inter rallied to finish the season in sixth place but failed to retain the UEFA Cup. On a personal note, Bergkamp produced a measly return of just five league goals and thus came questions over his future.

In the summer of 1995, Massimo Moratti completed his takeover of the club and brought about his vision of totally reshaping the club.

There were numerous casualties in the coaching and playing staff as Moratti brought about substantial change and Bergkamp became one of those.

Inter sold the Dutchman to English side Arsenal for £7.5 million, making profit on a player they had deemed surplus to requirements.

Bergkamp never looked back. Despite his fear of flying leaving him missing the odd European away day, Bergkamp was a huge success in North West London.

He was part of Arsenal’s infamous Invicibles side of 2003/04 as well as picking up three FA Cup winners medals.

Bergkamp also scored one of the all time great Premier League strikes with his stunning turn and shot to destroy Newcastle’s Nikos Dabizas in 2001.

Upon his retirement in 2006, Bergkamp was inaugurated with his image being added to the wall of legends at Arsenal’s brand new Emirates Stadium. For his country he finished up with an impressive record of
37 international goals in 73 caps for Oranje.

As with many over this series, Bergkamp went onto achieve success following his departure from Inter.

His career at Arsenal and Ajax and his exploits for his country make Bergkamp one of modern football’s most gifted and well respected strikers. His ability to play as well as contribute goals saw him usher in an argument for strikers to be more than just goal getters.

It again simply strikes a case of wrong place wrong time for him at Inter. A managerial merry go round in a pre- Moratti world and being part of a side that produced Inter’s lowest league finish didn’t aide his reputation.

Had Bergkamp been a Moratti man he may have managed one more year to prove himself in Milan but it wasn’t to be. Another crazy case of a player who just didn’t fit into blue and black stripes but just about any other.