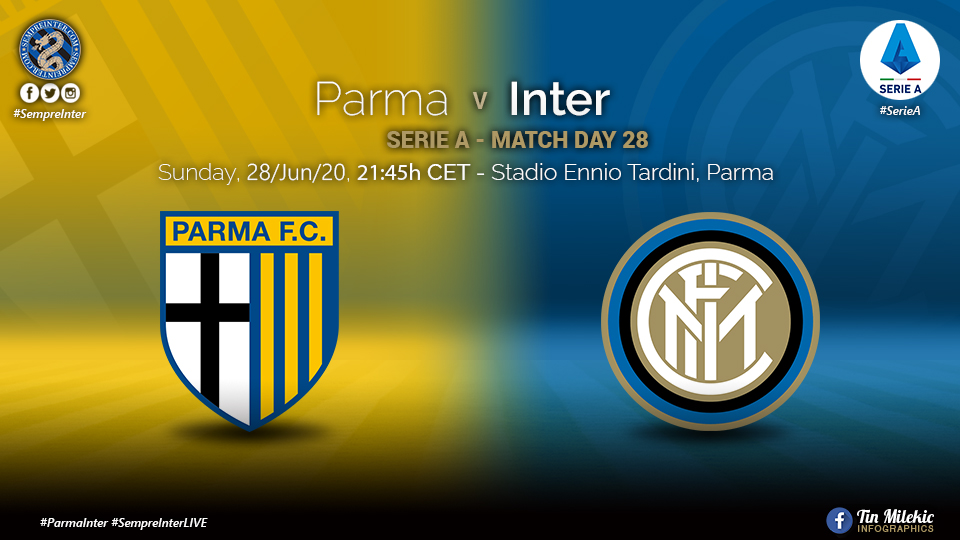 After drawing the cursed fixture against Sassuolo, Inter look to climb the back up the unlikely ladder of  title contention against Parma in a tricky away match. Match tonight Sunday at 21:45 CET.

Whether Antonio Conte was making a point to the Inter board and tifosi or whether it was just a mistake, his reliance on too much rotation proved to be costly for the Nerazzurri’s slim title contention hopes. It will be safe to assume that Conte will now make sure to select his best eleven for this match trying to take the three points from the hosts.

It is clear that Nicolo Barella must always be selected if available. The young Italian has cemented himself as an essential cog in the Conte midfield machine, and his absence throws the central module off-balance. Barella will play alongside Spaniard Borja Valero, who will probably replace the on-the-mend Marcelo Brozovic.

With Cristiano Biraghi’s impressive performance last week, it is quite possible he will start on the left flank ahead of Sassuolo villain Ashley Young. The usually disappointing Italian wide-man had a season-defining performance capped with an excellent goal.

Expect Conte’s tactics to be business as usual, lining up his side to smash and grab the match in the first half and then take their foot off the gas in the second period.

Roberto D’Aversa’s Parma will look to take a page out of the Sassuolo playbook. In Gervinho and Dejan Kulusevski, Parma possess the sufficient speed and technique on the wings to be able to trouble the visitors on the break, stretching the play out wide in the final third. The two men will either flank or play off the in-form Danish striker Andreas Cornelius.

Inter must commit to winning the match at all costs, especially to keep the ambitions of the resurgent Atalanta at bay, however, this desire to win cannot be at the expense of underestimating a very tricky host. A tough match awaits the visitors.

Inter are still without the services of Stefano Sensi and Matias Vecino while midfield metronome Marcelo Brozovic might make it to Conte’s squad selection having apparently recovered from his muscular injury. Milan Skriniar will miss the match due to the ridiculous multi-match suspension he picked up against Sassuolo due to his alleged insulting of the referee.

Last 10 Head to Head: Parma hold an unlikely slight lead over Inter with four wins to Inter’s three. That said, Inter have won in two of their last three trips to the Tardini.

Lautaro Martinez: The Argentine striker’s chances of a move to Barcelona have taken a knock this week with news of a potential transfer fee cap to be imposed on the Catalans. This, coupled with news of Achraf Hakimi’s imminent arrival at the club, will probably fire-up the Argentine to continue to shine and play an increasingly important role at this resurgent project.

Prediction & scorers: Parma 1 – 2 Inter with Lukaku and Lautaro to score for the visitors.

Concluding remarks: It appears that Inter will, yet again, not be able to maintain a clean sheet here. That said, expect the Nerazzurri to ensure that they take back all three points to Appiano here.