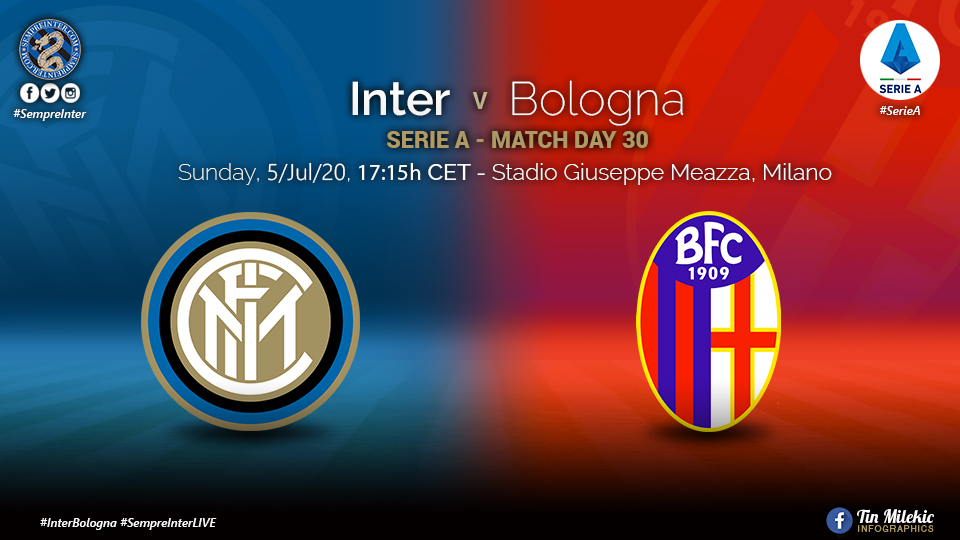 Following the dismantling of Brescia on Wednesday, Inter host Bologna as the guests look to start a tradition of raining on the Nerazzurri parade. Match today Sunday at 17.15 CET.

With second place potentially just a single point away, Inter have the opportunity to make concrete improvements to their last couple of seasons’ finishes. In order to continue maintaining distance from rampant Atalanta and come within touching distance from second place, Inter need to take care of a very tricky guest in Bologna.

Antonio Conte’s Inter made amends for a couple of sub-par performances against Sassuolo and Parma by ravaging a hapless Brescia, scoring six goals against their Lombardian neighbors. Conte will look to build on the victory by dispatching Bologna, a team coached by the wily Sinisa Mihajlovic.

Conte seems to have found a bit of balance to his squad rotation, and with Marcelo Brozovic ostensibly returning to the starting lineup, the midfield might finally have its preferred starting duo sitting behind playmaker Christian Erisksen. Possibly more importantly for the hosts, Alexis Sanchez looks to have rediscovered a patch of real form which will give Inter real options going forward.

Bologna seem to have secured safety from relegation and appear to be too far from a European finish, but that will mean very little in terms of motivation (or lack thereof) for coach Mihajlovic. The Serbian ex-Interista coach is known for always putting up a fight, regardless of what is at stake.

Bologna is a team studded with ex-Interisti; Rodrigo Palacio, Gary Medel and Andrea Poli and observers will know that Inter are particularly susceptible to the curse of the ex. That said, the biggest threat to Inter could potentially be Nicola Sansone, a forward who is very familiar to ruining an Inter party.

Despite the visitors having little to play for, expect this to be a hard-fought match with Inter working very hard for any points they will collect.

Milan Skriniar will be sitting out the final match of his three match suspension. Marcelo Brozovic will finally be fully available for the match and will finally make the matchday squad. Stefano Sensi, Victor Moses and Matias Vecino will all miss the call-up due to their respective injuries.

Last 10 Head to Head: Despite having lost to Bologna last season at the San Siro, this will have been Bologna’s only win against the Nerazzurri in the last ten matches while Inter have beaten the visitors six times.

Alexis Sanchez: The Chilean forward had a man-of-the-match performance against Brescia, and viewers will be watching closely to see if Sanchez can continue building on that performance and slowly rediscover his form of half a decade ago. An in-form Sanchez is a great addition to any football team, particularly so for Conte, who needs any depth up in attack.

Concluding remarks: Do not expect a result similar to the demolition of Brescia, Bologna are a solid team coached by a very capable manager who will challenge Inter at every point in the match. That said, expect Inter’s quality to finally prevail.