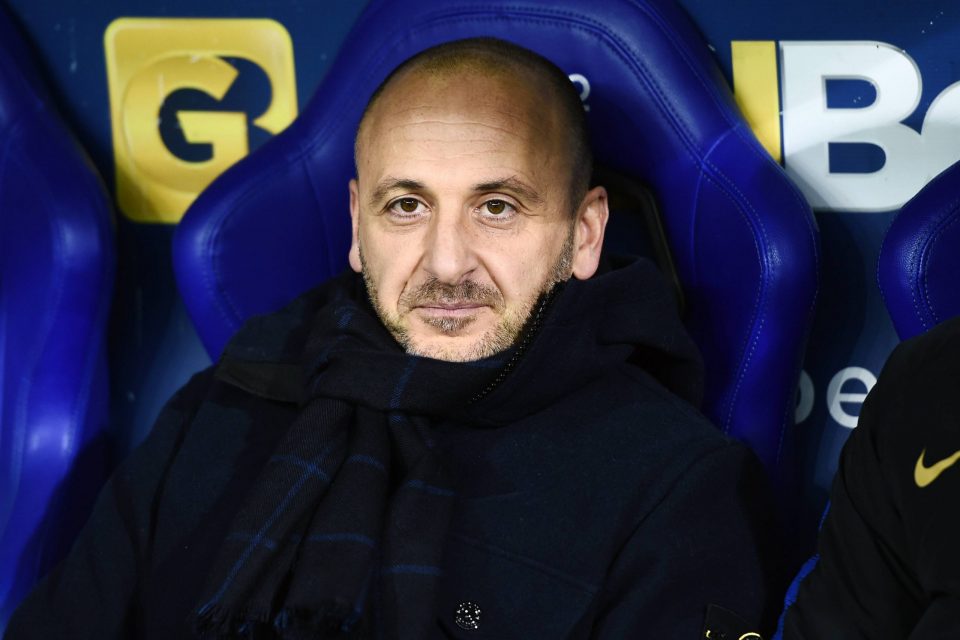 Inter sporting director Piero Ausilio has confirmed that the club are not in for Lionel Messi, explained how things went down with regard to Sandro Tonali and also spoke on many other topics in an interview with Italian broadcaster Sky Sport Italia, which was aired a short time ago.

“More than a pact, a common idea of ​​work came out of that meeting. It was important to confront each other, it was a very fruitful meeting,” he explained.

“A common strategy emerged, fully shared by everyone, from the coach to the club. We must have a common united line and we are carrying it forward. Everything we do and are doing is totally shared by the coach, I want to say that.”

He was then quizzed on the recent speculation linking Inter with a potential move for Barcelona’s Lionel Messi.

“There’s nothing about Messi, I don’t even know where these crazy ideas come from. There’s no one in football who wouldn’t want Messi but then there’s the reality of the facts.”

Next Ausilio was asked whether it is wrong to say whether Suning do not want to invest at this time or not.

“It doesn’t seem to me at international level we’ll see big investments. We know our possibilities and abilities that we have, we don’t have to specify it every day.

“We have ideas to improve this team but we know the difficulties that come with selling players for example and before dealing with these situations we must clearly check what our possibilities and at the moment our possibilities are limited that we may need to sell.”

Ausilio then went on to speak about the club’s pursuit of Sandro Tonali and exactly what happened with regard to the Italian national team player.

“Inaccurate things have also been said about Tonali, it cannot be said that you have a player in your hand without having started a negotiation with the club to which he belongs.

“Tonali is a player who we liked and he does not become a bad player now that he is going to AC Milan but Inter simply was not and is not able to make an investment of that type.

“It was not a priority, we are trying to improve the team through possibilities and those possibilities do not allow us, at this moment, to make such an investment, and I wont go into the merits of the negotiations because, I repeat, we never negotiated for him. But we have many players in this role, first we have to sell then we’ll look at any eventual signings.”

Next he was asked about Arturo Vidal, who Inter have been heavily linked with, plus Radja Nainggolan, who has returned from a loan spell with Cagliari.

“Nainggolan is Inter’s ace in the hole, he still has a two-year contract. Today he came to the pre-season meeting regularly. He did what is required of a professional, making himself available to his club and coach.

“I am convinced that he will do it in a very serious and professional way, we will evaluate him carefully and I do not exclude the possibility that he may stay. We are talking about a great player who can improve many things. I’m not talking about the pitch but about rules of behavior that are the same for everyone and must be respected by everyone. He will have a chance, and it will be up to him to seize it and show that he wants to take this opportunity.

“Vidal? He is not our player, Nainggolan is. I can say that Vidal is a player that everyone who loves football likes but we will see, he has a contract with Barcelona. We will also be attentive to this situation.”

Ausilio, who was worked for Inter for well over a decade, was then asked about Aleksandar Kolarov, a player Inter are reportedly closing in on signing.

“Yes, I can confirm, that there are negotiations ongoing with Roma and with the player. When things are done in a clear and transparent way, as in this case, it can be confirmed.

“I cannot confirm that he is an Inter player because there are so many things to do, there is a work that needs doing and things need to be concluded, for better or worse, at the end of a negotiation but I can confirm that there is negotiations.”

Next he spoke on Lautaro Martinez’s situation.

“No negotiations have started for Lautaro Martinez because in reality nothing ever happened. We never started the negotiations, there was a clause and that.”

Ausilio spoke on his own personal situation amid reports in the media that he could leave Inter for a new job elsewhere.

“I renewed my contract five/six months ago. I have a very strong bond with Inter, the club and all of Inter. I have read many wrong reports about my relationship with the staff, coach or club.

“Here at Inter we compare ourselves like everyone else, I constantly speak with the coach, I have a cordial relationship with him as I have had with all the coaches.

“We play a lot on the things that have been said publicly, but we have clarified everything we had to say. Talking about a pact is excessive, we confronted each other and a unique vision emerged for the good of Inter.”

In conclusion he spoke on Romelu Lukaku and whether the Belgian is the only non-transferable player in the squad.

“I don’t like to talk like that, we know that there are players who may be more or less on the market for various reasons but what I can say is that we have a duty to look at the opportunities. Speaking of players like Lukaku, I can say that he is not for sale.”