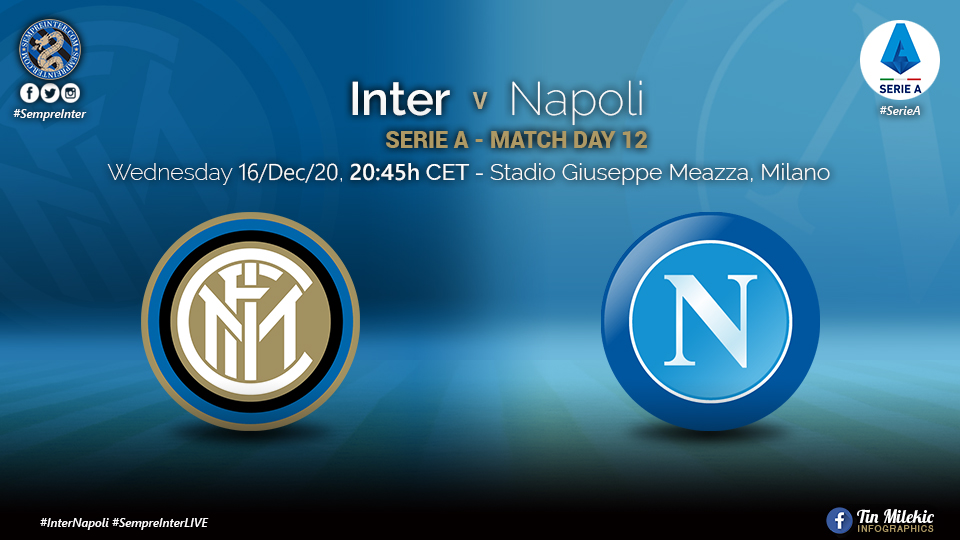 After putting the Champions League exit behind them with a convincing win over the weekend, Inter host high-flying Napoli hoping to continue pressuring league leader Milan. Match today Wednesday at 20:45 CET.

A match against Gennaro Gattuso’s Napoli is never an easy out. The Azzurri from the South have been one of the season’s surprise packages so far, and are currently riding a three match league winning streak and sit just one point behind their hosts coming into this match.

Antonio Conte will undoubtedly start the match with his preferred flat 3-5-2 formation, and look to hit the visitors quick, putting them under pressure from the starting whistle.

Inter’s midfield will need to work overtime; supporting the adding Lu La duo, while helping to protect the defensive trio against Napoli’s attacking quartet of Dried Mertens, Lorenzo Insigne, Piotr Zielinski and Hirving Lozano. Left unchecked, that attack can run rampant against any defense in the Serie A as Roma can attest.

The lack of attacking options off the bench for the Inter means that Christian Eriksen can be expected to make an appearance off the bench at some point in time to either complement the attacking duo or to replace any one of the two strikers.

If Inter want to win this match, it might be desire and effort that bring them across the line. Napoli are an excellent squad with a very bright manager, beating them will require some deep digging and the voglia to prove themselves worthy contenders for the Scudetto.

Long-term absentees Matias Vecino, Andrea Pinamonti and Radja Nainggolan are joined by Arturo Vidal and Alexis Sanchez who are both pairing some fatigue related injuries and will sit the match out.

Lautaro Martinez: Lauti has had a pretty strong start to his season so far, however, if there’s one bit of criticism that can be levelled at the young Argentine, it is that the results of his efforts across a given stretch of matches can be a bit patchy.

It would appear that the striker is going through a bit of a dry scoring spell at the moment and will want to get back into the scoring column ASAP.

Concluding remarks: Despite the UCL exit being in Inter’s rear-view mirror now, it seems that it will continue framing the context by which many Nerazzurri performances are judged moving forward. Inter need to continue winning, especially against head to head title competitors.