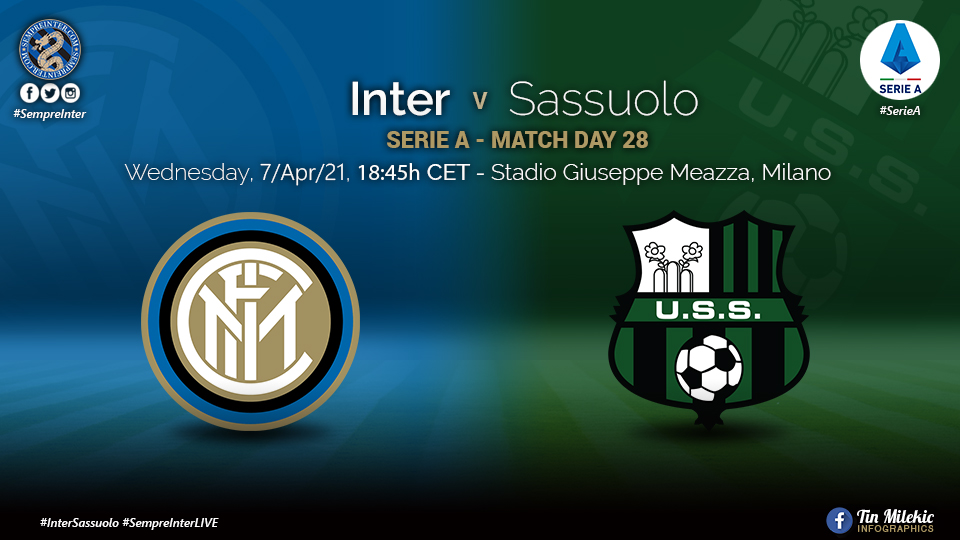 Inter will be making up their postponed match against Sassuolo on tonight at the San Siro, a win here can really cement the Nerazzurri’s title leading credentials. Kick-off at 20:45 CET.

Having  made some ground over the chasing pack through the weekend, Inter can really put some significant distance between them and second place Milan if they find their tenth consecutive victory against tricky Sassuolo.

Despite a strong start to the season, Roberto De Zerbi’s Sassuilo have found themselves in the middle of a pretty awful run where the Neroverdi have been able to win just twice in their last twelve league matches.

Extremely worryingly for the Neroverdi is the likelihood that they’ll step onto the pitch without their two main attacking threats; longtime Inter nemesis Domenico Berardi and Francesco Caputo. The pair have scored just about half their team’s goal so far this season.

It will be difficult to imagine how De Zerbi will approach this match, he will have to whether decide to attack Inter in Sassuolo’s mostly fearless manner despite missing his main attacking threats or will he try and have his side sit deep.

The problem with the either option is that we’ve seen Inter ably handle weaker sides who have to tried to employ both sets of tactics.

Inter will step onto the pitch without Alessandro Bastoni and Marcelo Brozovic, the pair are suspended for an accumulation of yellow cards.

Interisti are widely resigend to the fact that Roberto Gagliardini, not Stefano Sensi, will replace the Croatian midfielder, whereas either Matteo Darmian or Danilo D’Ambrosio will like replace Bastoni in the back three.

Expect Antonio Conte to face his visitors with no major tactical changes or tweaks. Conte will know that if Sassuolo try to come at Inter, this will only free up some channels for his own attacking threats to find spaces and get at the visitors.

On the flip side, if Sassuolo decide to defend deep, Inter will be confident in their ability  to apply relentless pressure and create enough chances possibly relying on their superior individual skill to break down the Neroverdi.

As previously noted, the Nerazzurri will be without Brozo and Bastoni. Arturo Vidal, Aleksandar Kolarov and Ivan Perisic will probably all miss out on squad selection, but surprisingly, Stefano Sensi will be available for the matchday squad.

Last 10 Head to Head: It is incredible to see Sassuolo’s superiority over Inter in the last ten matches. The visitors have beaten the hosts in six matches to Inter’s three wins. Another striking statistic is the fact that Inter haven’t beaten Sassuolo at the Meazza since September of 2014.

Christian Eriksen: Whether Sassuolo decide to attack or defend is probably inconsequential, Eriksen will probably have a protagonist’s role to play in this match. With Brozovic suspended, the Dane will most likely be afforded some more positional and creative freedom to influence and dictate the pace and state of play.

Prediction & scorers: Inter 3 – 1 Inter; Lukaku and Sanchez will score to keep the three points in Milano.

Concluding remarks: This is no easy match in spite of the statistics. Inter will need to ensure that De Zerbi’s counter attacking channels are shut down. Perhaps most importantly, the team cannot address this match as a forgone conclusion and need to ensure that maximum effort is expended at the end of the match for the win.