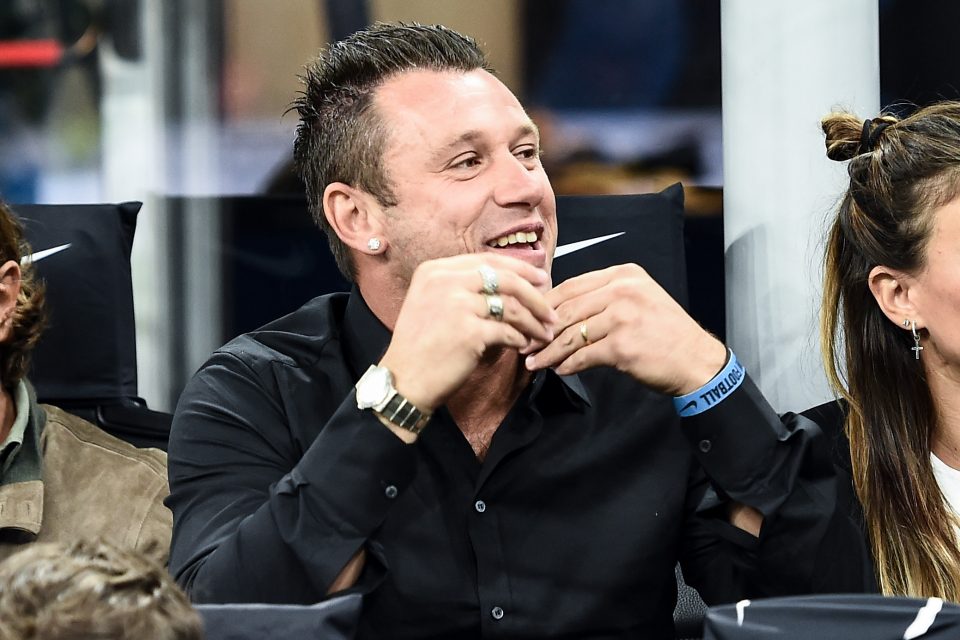 Antonio Cassano is so bored of watching Inter he didn’t even tune in for Sunday’s match against Cagliari.

The Nerazzurri are on course to win their first league title since 2010 after maintaining their 11-point lead at the top of the table on Sunday.

Antonio Conte is receiving criticism in certain sections of the media for his style of play, though, with some arguing Inter play ugly football and shouldn’t be celebrated.

Cassano went on an extraordinary rant last night, telling viewers on Christian Vieri’s Twitch channel, Bobo TV: “I watched padel (a racket sport similar to tennis) instead of Inter on Sunday, it’s always the same stuff with them.

“Conte guarantees you 15 extra points but not because he plays good football, because he gives you more confidence.

“He’s giving Inter a lot but I don’t like him as a coach and I like his style of play even less.

“Conte always wants his plays to do exactly what he tells them to do, there’s no freedom.

“He has a good chemistry with his players but Inter don’t play well and they never will while he’s in charge, which is proven by Conte’s record in Europe.

“If you play like this in the Champions League you’ll concede three goals and be sent home, Conte’s history shows us that.”

Cassano also gave his views on Christian Eriksen’s future at the club, arguing that Conte would be eager to get rid of the Dane this summer if he can.

“If Conte can give away Eriksen this summer he won’t need asking twice,” he argued.

“It’s not a coincidence that Inter play better football when Eriksen starts but Conte might get rid of him to sign a player he likes more, like Paul Pogba.

“When Conte has world class players he sends them away, he didn’t even want Andrea Pirlo at Juventus.

“There was a period earlier this season when he was mocking Eriksen by only playing him for four or five minutes; if he’d done that to me then we’d have had a real row.”

Despite Cassano’s tedious criticism, Inter have won 11 games on the bounce in Serie A and are on course to end the club’s 10-year trophy drought.

The Nerazzurri will look to take another step towards the Scudetto when they visit Napoli on Sunday.