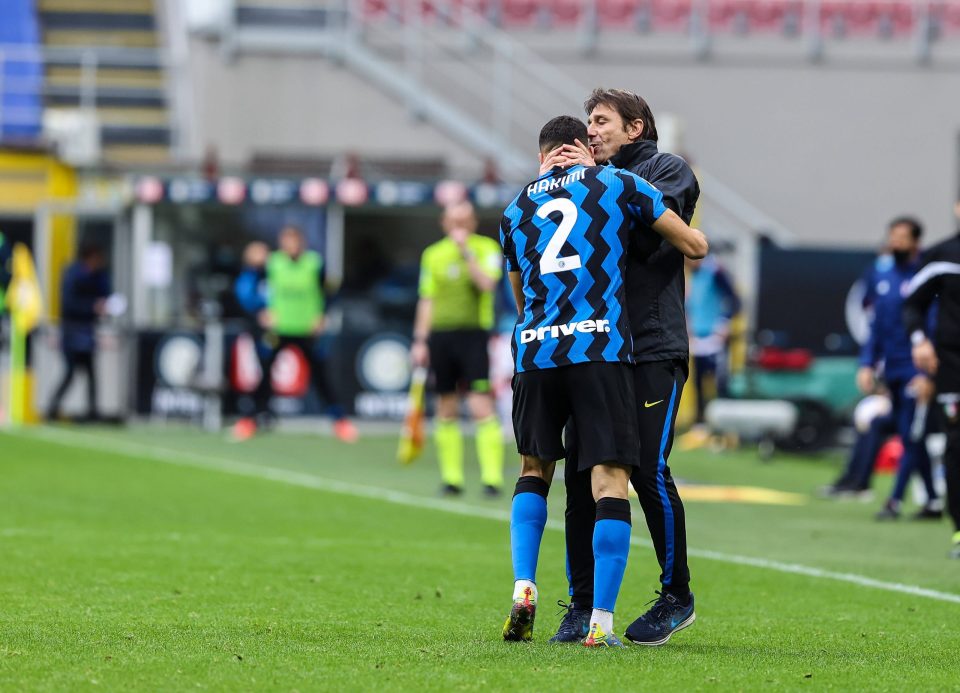 Achraf Hakimi is thriving at Inter thanks to his relationship with Antonio Conte, a report in the Italian media suggested today.

The Moroccan returned to form against Cagliari on Sunday by coming off the bench to provide a match-winning assist for Matteo Darmian.

Calciomercato.com said Hakimi’s relationship with Conte ‘went far beyond just respect’, as shown by the kiss Inter’s boss gave to the wing-back after Darmian’s goal at the weekend.

Conte’s gesture followed another moment of affection during Inter’s win at Parma last month, when he encouraged Hakimi on the touchline after he had pressed to win a throw-in deep in stoppage time.

Hakimi’s devastating cameo against Cagliari was only further proof of the huge upgrade Inter had made at right wing-back since last season, the report argued.

The 22-year-old has scored six goals and provided six assists in Serie A since joining from Real Madrid, underlining his status as one of the league’s most dangerous players on the right-hand side.

In addition to his goal stats, Hakimi has also completed 27 shots on goal this season, with 15 key passes and 17 clear chances created.

Hakimi is also ahead of most of Serie A’s best left-sided players, with Theo Hernandez having just four goals and five assists to his name so far at AC Milan.

Federico Dimarco, on loan from Inter at Hellas Verona, has four goals and three assists (along with 17 key passes and 14 chances created).

Atalanta’s Robin Gosens is the only left wing-back out of reach for Hakimi, with nine goals and eight assists in the league.