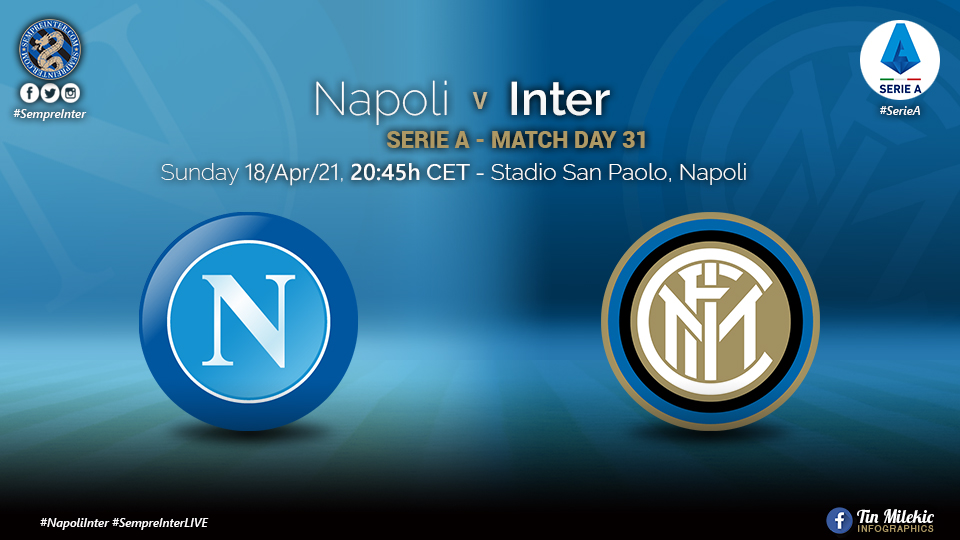 Inter are really putting their twelve match winning streak on the line as their travel down South to face Napoli at the Maradona Stadium. Match tonight at 20:45 CET.

This match has all the makings of a real classic. Not only are both sides fully fit and able to field their strongest formations, but the pair have also been in fine form as of late and both are chasing their respective objectives achieving which could be era defining for either team.

There is a risk that both Antonio Conte and Gennaro Gattuso cancel each other out, deciding that the risk of no points outweighs the value of the potential three points in grand arc of the season.

Inter will most likely play with their usual starting lineup, with Nicolo Barella slotting back into the midfield alongside Marcelo Brozovic and Christian Eriksen.

Conte will need to balance having his flying wingmen Achraf Hakimi and Ivan Perisic join Romelu Lukaku and Lautaro Martinez in attack while not leaving any spaces behind for Matteo Politano and Lorenzo Insigne to run into and attack.

Perhaps Conte will then decide to start Matteo Darmian on the left flank, seeing that the Italian might provide some better defensive cover than his Croatian teammate.

If both managers decide to go for it, expect this match to deliver nothing short of epic fireworks. On the other hand, if the pair of tacticians decide that not losing is the prime objective, this match could end up being a real disappointment.

Arturo Vidal and Aleksandar Kolarov are both still unavailable, however, the pair are expected to return to the squad shortly. Otherwise, Conte will have a full and fit squad to chose from, a real luxury at this point of the season.

Last 10 Head to Head: Inter hold a slight edge over their Southern rivals, with five wins to three over the previous ten matches. Perhaps more telling is the fact that Inter have won the last three league matches between the pair.

Nicolo Barella: Having served his one match suspension, Nico is back in the squad. Barella seems to really enjoy the trips to the South where he’s been known to put out some of his best performances.

If Inter are to take anything away from this match, the midfield will play a pivotal role and no one ties the midfield play together with as much natural talent and effortlessness like the best Italian midfielder out there.

Concluding remarks: Inter and Conte know that this could be the moment where the league is effectively clinched. If Inter are able to return to Milano while, at the least, maintaining their eleven point advantage, it will be as good as game over.