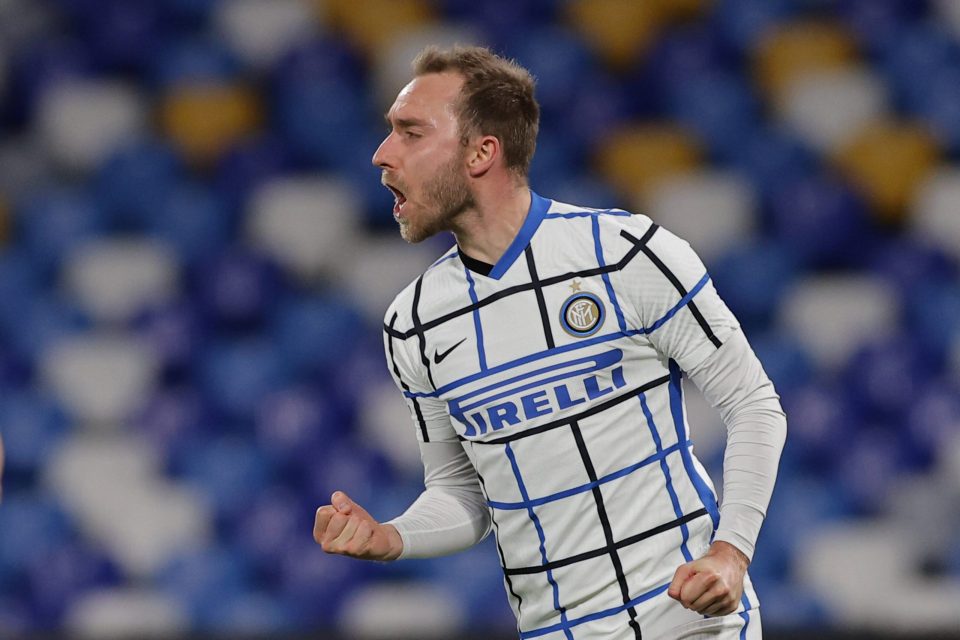 Christian Eriksen has surprised one former Inter director with his magnificent revival during the second half of this season.

Eriksen seemed certain to leave in January when he was linked with a return to the Premier League, but instead he remained and fought his way into Antonio Conte’s starting XI, displaying a mental resilience many that feared he didn’t have.

The Dane scored a crucial goal for Inter in last Sunday’s 1-1 draw at Napoli and looks set to be a pivotal figure in their bid to secure the Serie A title.

“Eriksen has surprised me, he’s managed to overcome a very difficult psychological period from a personal point of view,” Inter’s former chief executive Ernesto Paolillo admitted in an interview with nicoloschira.com on Thursday.

“He had been called into question and could have given in, but instead he fought hard and has become a key player for Inter.”

Paolillo admitted he was ‘extremely excited’ to see Inter fighting for the Scudetto again and was full of praise for both Conte and Beppe Marotta.

“The way the players celebrate every goal and victory is the kind of enthusiasm you see from teams that really want to win things,” he explained.

“This group of players reminds me of the group I worked with during my time at Inter.

“Conte is doing an unbelievable job, and I hope the Scudetto arrives because it would be a reward for the great work done by Marotta and Alessandro Antonello.

“They did well to keep the team focused during a difficult period when Inter couldn’t pay their players’ wages; they had the confidence of the players and they maintained it.

“Marotta and Antonello would deserve to begin a cycle and win several Scudetti.”

Paolillo, who spent six years as Inter’s CEO, also defended owners Suning amid the club’s ongoing financial struggles – although he thinks they made a mistake in signing up to the botched European Super League project.

“I didn’t expect Suning to start having these problems, but it’s not their fault,” Paolillo argued.

“Everything changed in China after the COVID-19 pandemic started, with the government imposing restrictions on overseas investment and making everything more difficult for those investing in football.

“Suning couldn’t do anything but fall in line.

“If I’d been them though, I wouldn’t have agreed to the Super League project; I’d have sided with Bayern Munich and Karl-Heinz Rummenigge.”

Inter were one of nine clubs to withdraw from the Super League this week after widespread condemnation from fans, players, politicians and rival clubs.