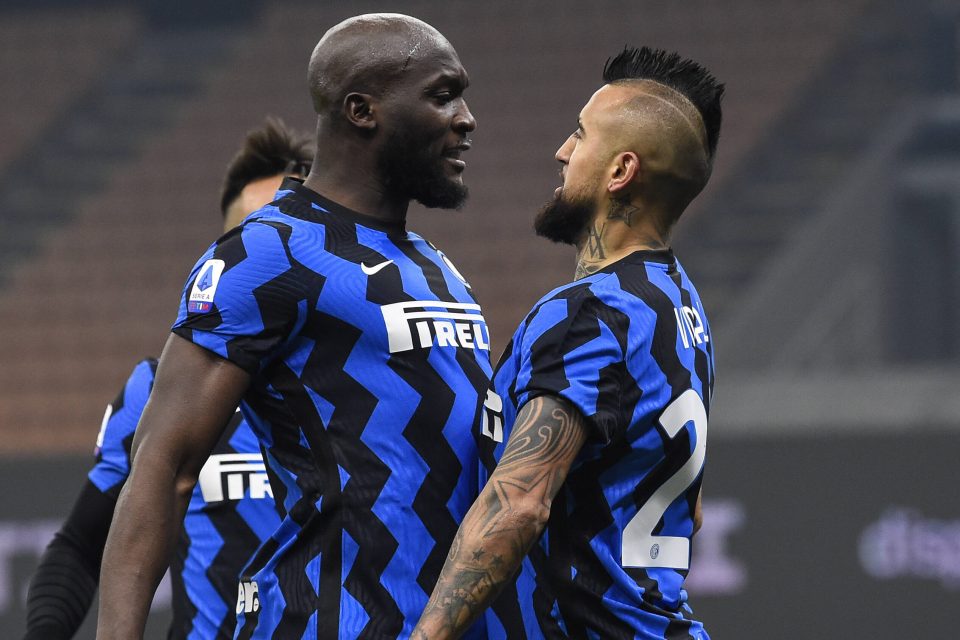 Lukaku and Lautaro have dominated Serie A since Antonio Conte’s arrival as head coach, pushing Inter this season towards their first league title since 2010.

Haaland is likely to become world football’s hottest property in the upcoming transfer window, but Vidal thinks the Borussia Dortmund star still has work to do before he can be compared to the best strikers.

“Haaland is a good player, but he’s only been on the scene for a year,” Inter midfielder Vidal told TNT Sports Chile today (via FcInterNews.it).

“You can’t compare him to Lukaku, Lautaro or Kylian Mbappe, who are a level above him.

“Then you have Robert Lewandowski and Luis Suarez who are on another level, they’re still the best in the world.”

Vidal is known to have a close relationship with Antonio Conte after the pair spent three years working together at Juventus.

Conte was thought to be instrumental in bringing the Chilean international back to Serie A last summer, and Vidal was only too happy to confirm that.

“I only came to Inter because I spoke with Conte,” he admitted.

“Conte always called me to ask if we could work together again, he knows what I am as a player and as a person.

“He’s a very direct man who tells you things to your face.”

Vidal also spoke about his recovery from knee surgery, which has kept him out of action at Inter for more than two months now.

“Conte and I are calm about it because he said he wants me to play like I know how (instead of playing below his potential with an injury),” he said.

“That’s why I decided to stop (get operated); he knows how I play and what I’ve won, so if I’m not feeling right I need to step aside, prepare myself and come back stronger.

“My knee is improving now, I’ve needed more time because everything went quickly after the operation.

“I was almost ready to play and then I overburdened my leg in training and I paid for it.

“We spoke with the coach and we decided the best thing was for me to recover properly.”

Vidal’s last appearance for Inter came during a 1-0 win at home to Atalanta on March 8, where the midfielder was substituted shortly after half-time.

“I was pretty much playing on one leg,” Vidal revealed.

“I was playing with pain and I was suffering, I was doing a nasty thing for myself and the team.

“I hope I can play our last game (against Udinese), but I don’t know what’s going to happen.”